On Friday night UTLA, representing teachers,  and LAUSD reached a tentative two-year contractual agreement for 2009-2011. AALA , representing administrators, reached agreement Monday - concluding more than three months of negotiations. The tentative agreement provides for the District to shorten the 2009-2010 school year by five days and the 2010-2011 school year by seven days (five instructional days and two pupil free days).   See Attachment A, following , for specifics on the calendar changes for this year.

27 March, 2009 - On March 26, UTLA reached a tentative agreement (see text) with LAUSD that would maintain class sizes and save more than 2,100 jobs for the 2010-11 school year without implementing a permanent pay cut. UTLA’s bargaining team successfully pushed back against LAUSD’s demand for a 12% salary reduction. The deal would have to be approved by UTLA members. Key points include:

UTLA members will vote on the agreement at school sites April 7-9. There will be a citywide chapter chair meeting at 5 p.m. on Monday, April 5, at Roybal LC to distribute balloting materials. The voting timeline is very tight to cause the least disruption to sites planning for next year. A detailed Q&A will be soon posted on utla.net.

from the Associaed Administrators of Los Angeles UPDATE| Week of March 22, 2010

March 25, 2010 - On Monday, March 22, 2010, AALA and the District reached a tentative two-year contractual agreement for 2009-2011, concluding more than three months of intense negotiations. The tentative agreement provides for the District to shorten the 2009-2010 school year by five days and the 2010-2011 school year by seven days (five instructional days and two pupil free days). The agreement will remain tentative until AALA members ratify it (details will be available soon). Note: UTLA must also agree to the shortened school years for the furlough days to take effect.

In exchange for AALA’s acceptance of the 12 furlough days, the District agreed to the following concessions:

• The District will not seek additional pay cuts from AALA members for 2010-2011.

• The District will restore 100+ school-based administrative positions that would have otherwise been cut.

• The District will meet annually with AALA to review possible revisions of administrative staffing norms.

• AALA will gain extended protections for members subject to demotion or dismissal.

• The District will provide two professional development days in 2010-2011 to K-12 school-based administrators assigned on B, D, or E basis. AALA members will be paid their regular rate. The days are for reviewing student test data and planning instruction.

• Beaudry and Local District AALA members reassigned from A to B basis will receive seven days of Z basis time in 2010-2011 at their regular rate. This will allow continuing services to be provided for the District’s remaining year-round schools.

• The District will create a new Professional Development Advisory Committee for administrators. Half of the committee members will represent AALA.

• The District will notify AALA in writing no fewer than 15 calendar days prior to the application deadline of any vacant or new administrative positions.

• AALA members will have parity in salary increases with any other certificated bargaining unit during the contractual period.

Please be aware that AALA remains in regular communication with the Superintendent about other key nonnegotiable issues that impact our membership. We will keep you informed on these matters as our discussions progress. 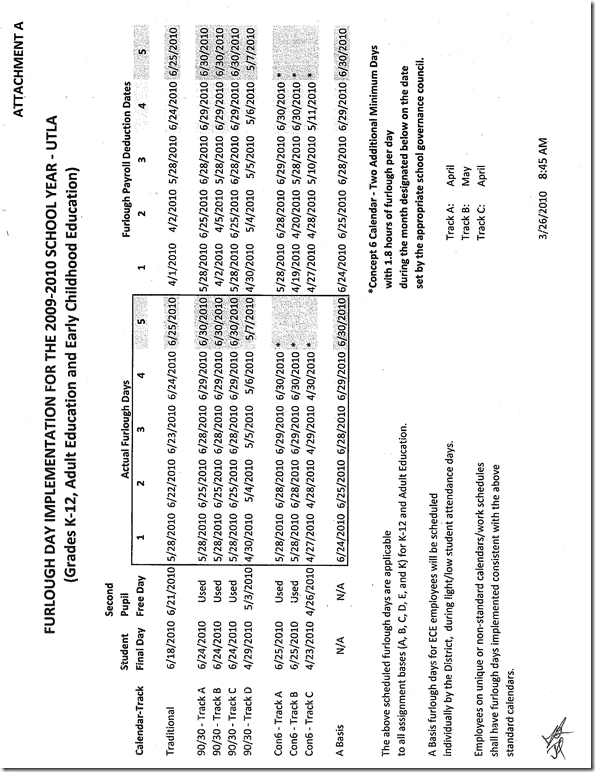