THE PUSH BACK ON CHARTER SCHOOLS

By THE EDITORS OF THE NEW YORK TIMES 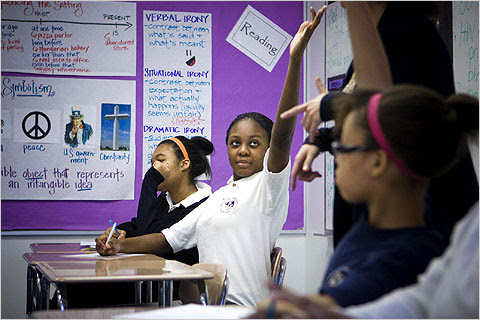 March 14, 2010, 7:00 pm | Two recent New York Times articles have described opposition to the thriving charter school movement in Harlem. An influential state senator, Bill Perkins, whose district has nearly 20 charter schools, is trying to block their expansion. Some public schools in the neighborhood are also fighting back, marketing themselves to compete with the charters.

This is a New York battle, but charter schools — a cornerstone of the Obama administration’s education strategy — are facing resistance across the country, as they become more popular and as traditional public schools compete for money. The education scholar Diane Ravitch, once a booster of the movement, is now an outspoken critic.

What is causing the push-back on charter schools, beyond the local issues involved ? Critics say they are skimming off the best students, leaving the regular schools to deal with the rest? Is that a fair point?

Schools Are for Kids, Not Adults

I have been heartbroken as I have watched generations of black and Latino students failed by our public school system, then descend into unemployment, drugs, crime and, often, untimely deaths. This has been going on since I was a public-school child myself in the South Bronx in the 1960s, so I am baffled that the opponents of charter public schools claim that charters caused this problem.

The only threat charter schools hold is to the myth that poor students cannot succeed academically.

For me, this is not an intellectual debate. This is quite literally about saving young lives. For parents in devastated neighborhoods such as Harlem, the decision to send their child to the local failure factory or a successful charter school is no choice.

But only 3 percent of New York City’s public school students go to charter schools, so to say they are a threat to the entire system is disingenuous. The only threat charter schools hold is to the myth that poor, minority students cannot succeed academically.

My organization, the Harlem Children’s Zone, runs charter public schools, but also spends more than $12 million annually to support nine traditional public schools. As someone on the front lines of raising money for schoolchildren, I can tell you that the philanthropic dollars going toward charters are there because the donors are aligning their altruism with a business-world pragmatism.

If charters disappeared and the status quo remained the same, these new private dollars would simply disappear too.

The real question of choice is for the public school system itself: will it serve the children in our schools or the adults? I’ll support any school that will educate children. Can the critics make that same claim?

Richard D. Kahlenberg is a senior fellow at the Century Foundation and the author of “All Together Now: Creating Middle-Class Schools through Public School Choice,” and “Tough Liberal: Albert Shanker and the Battles Over Schools, Unions, Race and Democracy.”

Charter schools have long basked in the glory of “bipartisanship,” but like the No Child Left Behind Act, charters are finally experiencing some push-back and deservedly so.

Teachers in charter schools do not have a voice.

On one level, charters offered something for everyone. Liberals liked
providing choice for kids stuck in bad schools that stopped short of private school vouchers. Conservatives liked the union-free environment found in most charter schools. Newspapers featured glowing reviews of high performing charter schools like KIPP.

But as the evidence comes in, the bloom is coming off the rose. Three communities are fighting against the bipartisan consensus: academics, teachers and civil rights groups.

Scholars have discovered that success stories like KIPP are unrepresentative. Stanford University researchers, backed by pro-charter school funders, found that nationally, only 17 percent of charter schools outperform comparable public schools, and 37 percent underperform. Much smaller studies, most notably Caroline Hoxby’s analysis of New York City public schools, have found positive results, but her study has been criticized as methodologically flawed.

Teachers have also soured on charter schools. Education Secretary Arne Duncan correctly notes that the late teacher union leader Albert Shanker was an early supporter of charters. But as I outline in my biography of Shanker, he envisioned charters as a vehicle for enhancing the teacher’s voice and grew disillusioned as they became a vehicle for bypassing union representation. Lacking voice, charter school teachers are 132 percent more likely to leave the profession than teachers in regular public schools.

Civil rights groups are also increasingly concerned given new evidence that charters are even more racially isolated than regular public schools. Charter school supporters respond that today providing a good education advances civil rights, whatever the racial makeup of the school, but that retort ignores the fact that charters rarely provide a superior education.

Indeed, the disappointing academic record of charters is surely linked to longstanding research finding that racially and economically separate schools are rarely equal.

Given these realities, researchers like Diane Ravitch, a former charter school supporter, are right to question the Obama administration’s heavy bet on charter schools. A better alternative is to revive Shanker’s original vision of charter schools as teacher-led institutions that are representative of America’s diversity.

Jeffrey Henig is professor of political science and education at Teachers College, Columbia University. Luis Huerta is an associate professor of education and public policy there.

Concern about charter schools has been simmering, but until recently New York City had been spared some of the high-octane political battles that have marked the national debate.

Competition for resources is creating friction between public officials and new education “outsiders.”

One reason is that Mayor Bloomberg and Chancellor Klein have aggressively welcomed charters, while in other cities school boards and local superintendents have led the charge against them. Another is that charters in New York made their initial inroads during a time of economic growth and high investment in the local schools, defusing fears that they would drain resources from the traditional school system.

The state level cap on the number of charters also dampened resistance; as long as the cap was in place, the prospects of a major shift of students and revenues away from the traditional system was restrained by policy.

So why are challenges to the local charter movement bubbling to a head now?

Shifting economic and political conditions at the state and national level go some of the way toward explaining the more vocal and newly energized critiques of charters. The push-back is exacerbated by local policies that, especially in tight economic times, make the tensions between charters and traditional public schools more palpable.

The recent economic downturn affecting all public services, together with the unfulfilled promise of new revenues from the Campaign for Fiscal Equity court decision that, a little over three years ago, seemed poised to create a revenue windfall, have made it clear that charters and traditional public schools are no longer sharing an expanding pie.

Pressure from the Obama administration to remove charter caps, and to intervene more aggressively to hold failing schools and teachers to account, raise the general level of anxiety about charters taking over. At the same time, local education officials are outsourcing school management to for-profit and nonprofit management organizations. These groups are seeking to establish their brand of management in the wider school reform landscape — and are battling for a bigger share of public school buildings and revenues to meet their economic bottom line.

All of this, combined with the near-dismantling of the familiar community school districts, is scrambling the traditional channels of communication between parents and school officials, while also blurring the boundaries that delineate whom parents can hold accountable for their children’s best interest.

In communities where failing schools persist, the rationing of scarce resources and accompanying policies may be fueling resentment toward two groups: public officials, on the one hand, and new education “outsiders” on the other.

When charter schools are posed as the favored reform vehicle, and especially when they are offered space in a school building that the community considers part of its local fabric, it’s not surprising that things can boil over.

How to Insure Fairness and Financing

Michael Goldstein is the founder of Match Charter Public School in Boston.

Why is charter school friction reaching a boiling point in Harlem? Are the anti-charter concerns driven by fair-minded policy analysis, or simple fear of Harlem parents voting with their feet?

The Boston charter story is instructive.

The bickering blocks important discussion of how to improve the charters.

In the mid-1990s, some charter critics made three predictions: Boston charters would “cream” off the white students and serve fewer black ones; they would attract “motivated” kids from well-to-do families and fewer poor kids; and they would fail to deliver academic performance.

But Boston charter founders recruited heavily in community centers and black churches. As a result, the charter school student body here is about 60 percent African-American, compared with about 33 for the district as a whole. And the proportion of poor kids in charters, while not identical, is very close.

Nationally, charter critics have a legitimate point in terms of quality. It’s mixed. But certain areas, like New York City (and Harlem in particular), and like Boston, have powerful empirical evidence showing charter teachers generate huge gains for kids who attend.

No matter. Critics didn’t apologize for any of their predictions. They opened up new lines of critique. First, serving lots of black kids was now called “the new segregation.” A second angle: because Boston charters serve more native-born black children, inherently, then, we serve fewer kids born in Mexico, Vietnam, Cape Verde and China. But this is spun as purposefully not serving this student population. And so on. Therefore, I would predict that the greater the success of the teachers in Harlem charters, the more they’ll be attacked (and their principals) over the coming years.

The bickering blocks important questions, all built around the foibles of even the highest-performing charters. For example, why do these charters generate much bigger gains in math than English? Or: If charter teachers frequently describe working nights and weekends, how exactly are those hours used, and is there a way to create efficiencies? Only then would the teaching methods become more accessible to all teachers, particularly to those with their own families who can’t log such intense hours.

With great Harlem charters fighting for their institutional lives, it’s hard for them to analyze these sorts of issues, those that have win-win potential for all kids.