3 articles from the March 2010  issue of URBAN EDUCATOR, from the Council of Great City Schools | http://bit.ly/9i8anG

A number of academics, a handful of interest groups, and a spoonful of think tanks recently have promoted a series of reports and papers advocating changes in federal education funding formulas that would significantly reduce the level of financial aid to the nation’s major urban school systems and the children they serve.

Issuing papers, analyzing data, and offering opinions is the stock in trade of Washington-based educational organizations, particularly those that do not have a membership, a constituency, or a responsibility for producing results in our schools. Much of this rhetorical bantering is harmless, but in this case the proposals that are being floated have the potential to cut millions of dollars in badly needed Title I funding to urban schools; negatively affect millions of inner-city children who rely on supplemental academic support from the teachers the program provides; and divert substantial sums to school districts with far less severe needs.

Admittedly, the funding formulas—four of them—that determine how federal Title I funds are distributed across the vast majority of school systems across the country are complicated and not terribly transparent, although they are relatively straightforward in comparison to state foundation-aid formulas. They have evolved over the 45-year history of the law and generally include two main components: the number of school-age poor students and state average per pupil expenditures. The first variable is a proxy for low academic achievement, and the second variable is designed to serve as a proxy for the cost of education state-to-state. The four tiers in the formula structure are basically designed to provide a floor of supplemental support first to any eligible child in the country regardless of how many there are in any locale. And the auxiliary formulas are designed to provide greater targeting of aid in places where poverty is most concentrated, an even stronger correlate of achievement than poverty per se.

The proxies are not precise, however, in distributing aid where it is most needed, but they do a good job across a very complicated country in sending federal resources where they are most needed, despite anomalies and anecdotes to the contrary. And most Congressionally mandated studies over the years have demonstrated that the resources go where Congress most intended them to go.

It has been awhile since Congress has had a Title I formula fight and almost no one proposing changes has ever gone through one. But for those of us who have, three things are certain if the formulas are opened up. One, the outcome of the fight may be no more to the liking of the think tanks than the current formulas because, once opened, it is very hard to control what happens as members battle to get their “fair share.” Second, any hope of producing major reform in No Child Left Behind becomes secondary when money is on the table. The same advocacy groups pushing formula changes are also pushing other important reforms that are likely to fall by the wayside in the midst of a funding donnybrook. Three, attempts to reinvent the Title I funding formulas always dredge up old controversies that have been long settled or at least put to bed. Should states and communities that don’t support education financially be rewarded by federal aid? How will state or local costs be addressed? How will the relative wealth or lack of it in any jurisdiction be considered?

While not perfect, the existing Title I formulas have attempted to settle down these divisions. Now—when the economy is so bad and so many other reforms are more badly needed—is not the time to reopen them. Besides, behind all these papers and reports by folks who have never gone through this before are real kids, real teachers, real schools, and real communities that can be significantly harmed if the funding cuts to urban schools were adopted. Let’s save the fights for something important.

Studies have found that parental involvement is a critical factor in increasing student achievement, yet many urban school districts grapple with the best way to help parents support their children’s education.

The program includes three full-day Saturday learning sessions, with additional sessions offered throughout the year, and offers elective classes such as financial management, health and wellness, English as a second language and computer literacy. Parents who complete courses will attend a graduation ceremony in June.

A program will also be created to bridge the parental involvement gap that occurs between middle and high school years.

Last month was the one-year anniversary of the ARRA and the Council of the Great City Schools issued a statement praising the law for providing nearly $100 billion in critical resources to help schools maintain essential education operations.

“The ARRA has been a financial lifeline for the nation’s urban schools,” wrote Council Executive Director Michael Casserly. 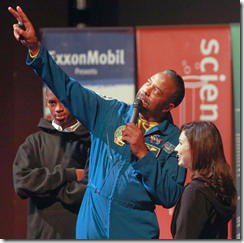 A new scholarship is now available to African American and Hispanic students pursuing college degrees and careers in science, technology, engineering and mathematics (STEM) in urban school districts represented by the Council of the Great City Schools.

Named for the first African American to walk in space, former astronaut Bernard Harris launched the ExxonMobil Bernard Harris Math and Science Scholarships to help satisfy the need for more STEM college graduates in the nation, especially among minority students.

Four $5,000 scholarships for two males and two females each will be awarded to two African American and two Hispanic graduating seniors this year in the 66 school districts represented by the Council.

The scholarship program is a partnership among the Council, ExxonMobil and the Harris Foundation.

Through his foundation, Dr. Harris, a physician and businessman, reaches several thousand students each year with his various programs, including the ExxonMobil Bernard Harris Summer Science Camp and The Dream Tour, both designed to encourage students to “reach for the stars.”

The scholarship application is available on the Council’s web site at www.cgcs.org.