16 March 2010  6:26 p.m. | A 35-member L.A. Unified School District panel meeting tonight expects to forward recommendations to the district’s board of education. If they go into effect, they’d significantly change the way the district evaluates and pays its teachers.

Former L.A. Unified school board member Marlene Canter is on the Teacher Effectiveness Task Force. She told KPCC’s AirTalk that the group took on some big questions — "How are teachers going to be evaluated and is that going to be fair." 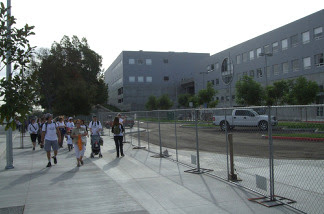 The panel would like teacher evaluations to factor in grades from parents and students, along with student test scores. In a statement, L.A. Unified’s teachers’ union said it was opposed to undermining seniority protections. The union’s president took part in the task force and was reportedly open to some of the overhauls.

Teacher and panel member Jordan Henry said the evaluation process has to change. "To me it's going to be a long road to finding a new measure, I believe, a new evaluation system after all, we're just making recommendations, we're not making policy and that's where it's going to get sticky."

Other proposed changes include giving new teachers more support, granting tenure after four years instead of two and paying experienced teachers more pay for working in tough schools. The panel would also like L.A. Unified to push the state to give school districts final say in teacher firings. That would require a change to state law. The school district would have to work out other changes with the teachers’ union.

USC education professor Katherine Strunk said the recommendations are in step with current scholarship about classroom instruction. "All research that we have shows that teacher quality matters more than any other possible input into kids learning that schools and districts can control."

Even if the school board approves the recommendations in whole or in part, UCLA education researcher John Rogers said the economy may create the biggest hurdle to change at LA Unified. "These conversations about a new evaluation system for teachers arise as 9,000 teachers in Los Angeles Unified received pink slips this week."

L.A. Unified’s board of education is set to begin debate on the teacher effectiveness recommendations next month.

March 15, 2010 -- High-performing teachers should earn more pay, tenure should be more difficult to achieve and teacher reviews should be tied to student test scores, a Los Angeles school district panel is expected to recommend Tuesday.

The proposals, aimed squarely at increasing the effectiveness of teachers, would be the most far-reaching change in years in how the Los Angeles Unified School District decides which teachers to promote and retain.

If approved by the city's Board of Education, the recommendations would be among the most aggressive in the state, if not the nation. Employee unions are expected to oppose some of the proposals, some of which would have to be collectively bargained.

The task force was created by the board, by a narrow margin, shortly before The Times published a series of articles last May examining the difficulties in firing and evaluating teachers.

A group of about 50 members, including teachers, administrators, union leaders and parents, has been meeting for months to discuss teacher effectiveness.

The task force, chaired by state Board of Education President Ted Mitchell, has heard from dozens of people inside and outside L.A. Unified, and is expected to present its recommendations to the school board and Supt. Ramon C. Cortines next month. Its final scheduled meeting is Tuesday.

Union leaders on the panel have expressed concern over some aspects of the recommendations, particularly using student test scores to evaluate teachers. It's unclear how big a factor achievement data would be in the nation's second-largest school district.

Mitchell said he thinks that value-added analysis, which uses several years of test scores to determine how effective teachers are, should eventually comprise at least half of a teacher's evaluation. But others, including the teachers union, argue that standardized tests aren't reliable enough to use in high-stakes employment decisions.

A handful of districts nationwide plan to use value-added data as a determining factor in a teacher's employment.

"I would hope, as the district gains confidence in its measures, that the [use of test scores] will rise," Mitchell said.

President Obama has endorsed using student test scores to judge teachers and some state lawmakers have pushed to include value-added student data, a move that has been staunchly opposed by California teachers unions.

State lawmakers agreed to begin using student data in teacher evaluations when applying this year for a competitive federal education grant known as Race to the Top. But about three-quarters of teachers unions refused to sign agreements to implement such changes, and the state was not selected for the first round of the $4.35-billion grant.

Though almost all task force participants said the evaluation system needs to be revamped, several were leery of putting too much weight on student and parent opinions.

"If you're going to have true accountability, it needs to rest with a single evaluator," said Judith Perez, president of the administrators' union.

The task force also called for extending the probationary period to four years for some teachers. Instructors are currently automatically granted permanent status after two years if administrators don't move to fire them. Fewer than 2% of probationary teachers are not granted tenure, according to a Times analysis.

Under the new proposal, teachers could still be granted tenure after two years but their probationary term could be extended for up to four years depending on their evaluators, who would have to recommend that a teacher receive permanent status.

Extending the probationary period would require a change in state law. District officials have briefed some state lawmakers on the panel's recommendations, but so far none has agreed to sponsor such legislation.

The school board could require that teachers be endorsed by an evaluator before receiving tenure without changing state law.

Several task force members said the school board will have to refine dozens of the recommendations, which include having an effective teacher in every classroom by 2016.

"This is an opportunity," said former school board member Marlene Canter, who served on the task force, "for the school district to push forward the idea that every child needs a good teacher."