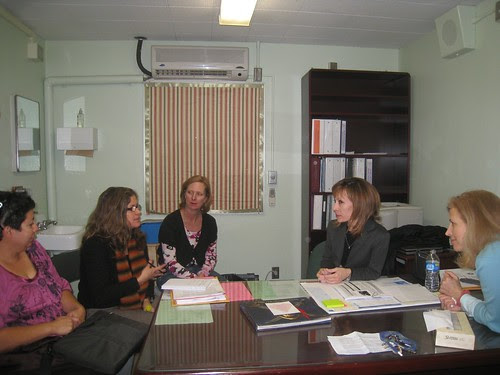 PTA parent and Arts Ed Advocate Cynthia Willman has authored this Guest Blog outlining her recent meeting with LAUSD board member Yolie Flores organized by a group of parent advocates in LAUSD District 5.

A group of parents from Dahlia Heights Elementary School’s PTA recently created a new advocacy group to help fight to keep arts education alive and well in Los Angeles public schools and in the LAUSD budget. Committee member Janet Borrus kicked off our efforts in December and January by making it easy for concerned parents to write and send letters to our LAUSD board member, Yolie Flores.

Our Action Plan for a Meeting with Our Board Member

We were fortunate to have Tara Stafford of Arts for LA in attendance at our meeting at a member’s house in Eagle Rock in early February. She helped us prioritize our ideas for action by suggesting that we should try to meet with our LAUSD board member, Vice President Yolie Flores, as soon as possible to express our passionate concern about the proposed 50% cut to arts-education funding.

We met on a Tuesday night, February 16th. The next day, I called Board Member Flores’ office and spoke to a very courteous scheduler named Olivia, asking for a meeting. One day later, Olivia called back and suggested that we meet ½ hour before Ms. Flores’ scheduled attendance at an event at our school that coming Friday, February 19th. She was already scheduled to be there to turn on the lights on the school’s playground, lights for which she herself helped find the funding. The DPAC members quickly agreed and began mobilizing to prepare our questions and messages for the meeting with Ms. Flores.

Face to Face in the Vice Principal’s Office

We met in our vice principal’s office, where Janet Borrus began the meeting by thanking Ms. Flores and her associate, LAUD Director of Community Partnerships Ron Palacios, for taking the time at the end of a buy week to meet with us. She then began the first part of the meeting by describing how drama class has helped her own daughter learn to speak out, and how, as a drama teacher, she had seen students – even teenagers at risk for becoming dropouts -- become fully engaged in learning and improve their attendance at school because of drama classes.

Another parent, our PTA President, described how her son had overcome a number of his learning disabilities through his interaction with music and dance classes. Lydia Estrada, another Dahlia parent and arts advocate, asked Board Member Flores how we could help her help our children retain arts education. Ms. Flores said that the best way at this time would be to help her and the LAUSD board get the planned parcel tax to pass. If that parcel tax is to pass, it will minimize the amount of cutting that would need to be done relevant to arts education.

We asked her what the total amount of the budget represented by art education actually is. She and Mr. Palacios promised to look the figure up and send it to us. My own notes indicated that the amount of the cut is planned to be $14.9 million, a very small percentage of the overall budget shortfall.

I and other parents expressed our strongly held beliefs that arts education should be considered core curriculum alongside reading and math. We mentioned what a big percentage of the California economy arises from creative commerce such as the film and TV industry, and how it’s not only ironic but dangerous to send our California-educated children out into the workforce unprepared for meaningful, professional engagement in it.

We also discussed our fears that arts education could soon become an “elites-only” opportunity, and how this could contribute to greater stratification between haves and have-nots. We could begin to see, among those who could afford it, “gifted flight” to private school. With the ailing economy already driving more families from middle- to lower-income status, giving children a less-than-solid education could result in a widening of the achievement gap.

Ms. Flores was fully engaged in the discussion with us, and it’s clear that she shares our concerns. She expressed her desire for all of us to stay in touch with each other, and asked for more representation by parents like us at LAUSD board meetings. We made a plan to follow up with each other through email and by phone, and then Ms. Flores and Mr. Palacios went out to turn the lights on out on the Dahlia Heights playground for the very first time.

Continuing to Send a Message

The DPAC group at Dahlia will continue to generate letters from the community in support of maintaining the program, whether or not the parcel tax passes. Our commitment is to a long-term solution, not just a short-term funding effort that only minimized cuts instead of retaining full funding for years to come.

To learn more about this campaign and to send a letter to your board member, please visit our LAUSD Action Center.