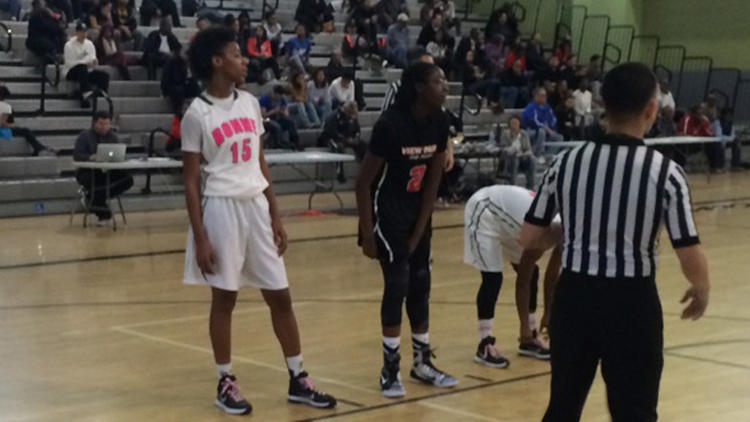 March 3, 2015 -  7:29 AM :: Narbonne High's girls' basketball team thought it was doing a nice thing, wearing uniforms with pink accents around the letters and numbers to acknowledge breast cancer awareness.

Instead, what was supposed to be a good deed has gone punished.

The Los Angeles City Section has bounced the Harbor City school team out of the playoffs because of a rule that prohibits teams from wearing uniforms with anything but their official school colors. Narbonne's are green, gold and black.

Narbonne, the top-seeded team in the playoffs, thought it had advanced to Saturday's championship game at Cal State Dominguez Hills by defeating View Park, 57-52, last Saturday. However, View Park will advance after City Section administrators ruled the game a forfeit. Narbonne's quarterfinal win over University also has been declared a forfeit for the same reason.

"This is what the rule tells me," City Section Commissioner John Aguirre said. "I'm going to be consistent."

Narbonne has decided to appeal, and a panel will hear the case Tuesday morning.

Aguirre said Narbonne's athletic director and principal were informed of the violation and asked for an explanation by a section official at halftime of Saturday's game. The decision to disqualify the team was made later.

Chris Cuaron, whose daughter is a senior on the team, said "no one said anything" when Narbonne wore the same uniforms in the earlier game against University. He expressed frustration at officials "waiting until the last minute to do this," just days before the championship game.

The City Section is part of the California Interscholastic Federation, but its rule on uniform color is unique. Earlier in the school year, the North Hollywood High girls' volleyball team forfeited a match because it wore uniforms that were entirely black.

The City Section granted some teams waivers to wear pink in their uniforms during breast cancer awareness month in October. "If they are going to do something against our bylaws, they need to call us to request it," Aguirre said.

Narbonne Coach Victoria Sanders said she was unaware the team needed special permission to wear pink on its uniforms. "I was under the impression we were able to do it," she said. "I didn't know we had to fill out a waiver."

Several players were attending the funeral of a teammate's grandmother Monday when they learned the team had been disqualified.

"We were so ready to play," said Nneka Anyaoha, a senior on the team. "This is very heartbreaking.

"I don't think it's fair. I know they say it's OK for breast cancer awareness month in October, but that's for football. For basketball, it's February.… They shouldn't disqualify us because we have pink on the uniform."

Aguirre said Narbonne's "lack of communication to follow protocol" was a factor in the decision. The school was already on probation because the girls' basketball team used an ineligible player during last year's state playoffs. That player received two technical fouls in a game, which automatically disqualified her from participation in the next game. Instead, she played in that game.

"Administrators are responsible for making sure their teams and kids are doing the right things," Aguirre said.

Narbonne principal Gerald Kobata said he was unaware there was a rule limiting uniform colors.

"This is a huge disappointment for the girls basketball team, a team that worked so hard to achieve success on the court and in the classroom," Kobata said in a statement released by the Los Angeles Unified School District.

"I feel badly for the students — especially the seniors — their families and the Narbonne community. Though bound by the decision, I want to make sure this never happens again here."

There was also lament expressed from the local offices of the Susan G. Komen Foundation, which raises funds for breast cancer research.

Mark Pilon, executive director of the organization's Los Angeles chapter, was not aware of Narbonne's plight until he was told by a reporter.

"It's very unfortunate," he said, "this happened to young girls in sports."