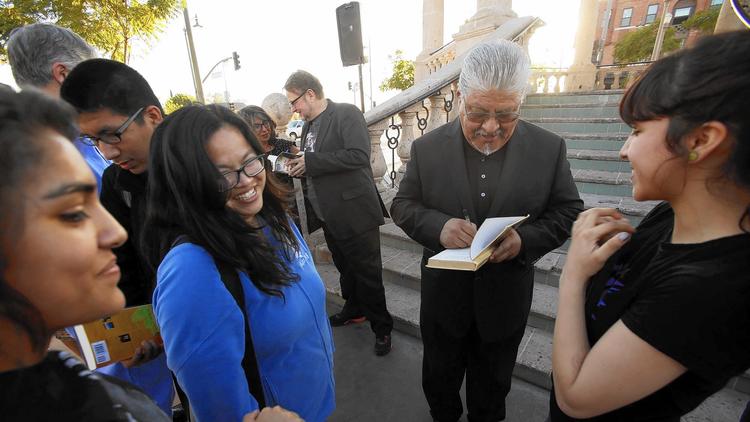 Author Luis Rodriguez, second from right, signs a copy of one of his books for a member of the Mendez High School Reading Club at Mariachi Plaza in Boyle Heights. (Genaro Molina / Los Angeles Times)

They remove their earbuds, hide their smartphones and communicate without the aid of electronic devices.

They are the coolest kids at Mendez High School in Boyle Heights.

They are the Reading Club.

"This is truly the biggest club on campus," said English teacher Rebecca Carriaga, who formed the group last year with librarian Kim Leng. The two of them have often dipped into their own pockets to feed the book-reading fever of students, and the club is now 20-strong and growing.

Why am I telling you this? Because this is book bonanza time in Los Angeles. 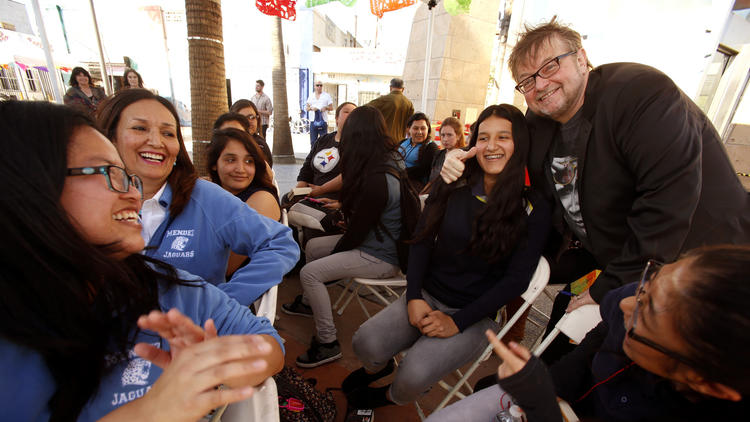 The annual citywide Big Read was launched last week, with guess-who right in the middle of it. That's right, the Mendez Reading Club marched from school to Mariachi Plaza to meet and hang with Luis Urrea, author of this year's Big Read selection, "Into the Beautiful North." And three weeks from now, these same students will cruise the L.A. Times Festival of Books on the USC campus.

I heard about the reading club from David Kipen, who runs the Libros Schmibros lending library and book store in Boyle Heights, and who started Big Read programs around the country back when he was at the National Endowment for the Arts. Mendez High and other Los Angeles-area schools, along with public libraries, will host group reads and discussions of "Into the Beautiful North" over the next month.

"It's classic L.A.," Kipen said of Urrea's comic and poignant book, which features a young Mexican female character named Nayeli, who happens to be a movie lover.

Nayeli, inspired by "The Magnificent Seven," and fed up with the drug-dealing thugs who sell to American surfers in her little town of Tres Camarones (three shrimps), crosses into the U.S. in search of seven real hombres to replace those who went north for work and never returned.

Before I get to the students' reaction, here's a little background on how the book club came to be:

Felicitas and Gonzalo Mendez High School for College and Career Preparation opened five years ago, and English teacher Carriaga said it seemed that some students, many of whom had not been exposed to reading at home, were intimidated by books. So she tried to take the pressure off by assigning books and then, rather than pass out written exams, sit one-on-one with each student to "interview" them about their impressions.

"I'd ask different questions and let them talk, and I found that they were authentically engaged," said Carriaga. "Then I noticed them recommending books to each other."

My mother will ask, 'How was your day, Moanni?' And I'll say, 'Wait. Let me finish this page first. - Moanni Leos

She and her co-conspirator, Leng, knew they had to capitalize on that enthusiasm. So they recruited one or two students, who helped fish for more, occasionally using pizza as a lure. Initially, the club talked about whatever book someone might be reading, but then came "Into the Beautiful North," the first book that all club members are reading and discussing together.

"He puts a little comedy into it and he puts a little bit of Spanish into it, too. I don't know much Spanish, but I'm curious, so I'll look it up or ask someone," said Tsuruta, who speaks some Japanese and Korean.

Club members Raymundo Villarreal, Mayahuel Aguilera and Nayeli Gomez are longtime readers and didn't need any arm-twisting to join. Villarreal said he has a library at home, Gomez thought the reading club would look good on a college application, and Aguilera seemed a little reluctant to talk to me because she was engrossed in — no surprise here — a book.

"I'm on Chapter 7 right now and this book is just hilarious," said freshman Moanni Leos, who loves that the female protagonist is such an agitator, trying to take back Tres Camarones along with her Aunt Irma, who runs for mayor.

Leos said she doesn't go anywhere without a book, and reads on trains, in bed, even while eating.

The newest member of the club, Ana Razo, has an entirely different story. She and her mother, who cleans houses, live in a home without books.

But recently at school, Carriaga assigned the "The Bully," by Paul Langan, and Razo had an awakening.

And then it was "The Boy in the Striped Pajamas," by John Boyne, a heartbreaking tale of two boys on different sides of a prison camp fence during World War II. That one was followed by Sonia Nazario's "Enrique's Journey," the moving tale of a boy's long border-crossing journey in search of his mother. 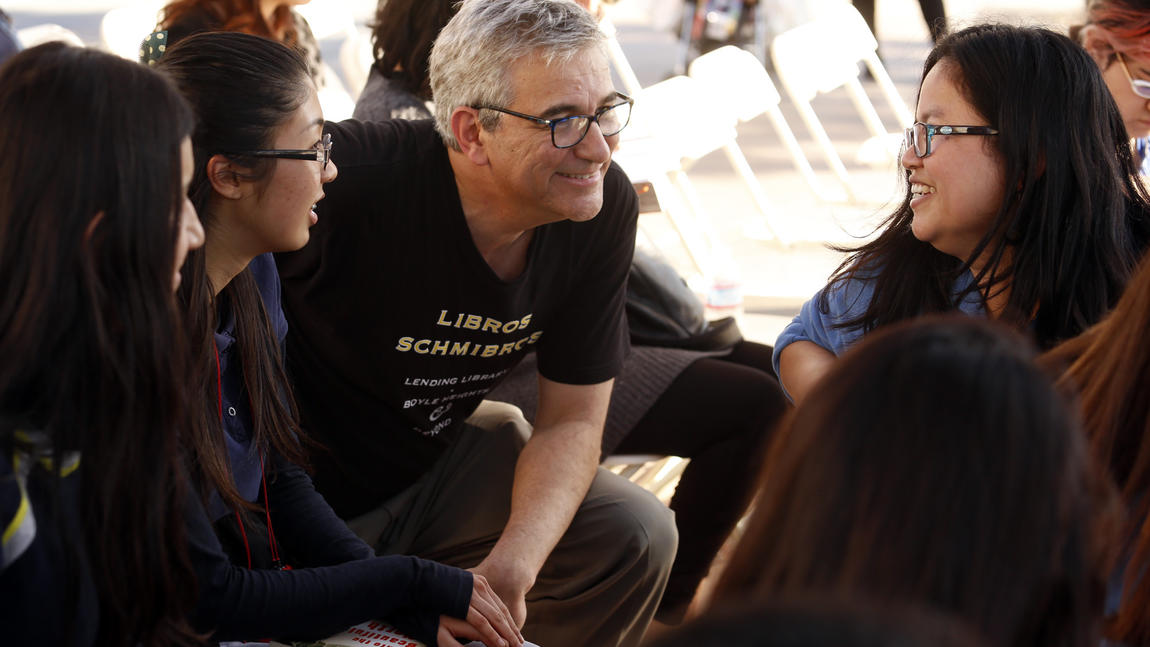 "I can't put it down," said Razo, who is reading "Enrique" along with "Into the Beautiful North," and has had a breakthrough not just as a reader, but as a writer too.

"Lately I've written words I never thought I could have written — words that were so hard for me to say, I'd just give up," said Razo. "I was so scared of reading."

I told her that I was the same way at her age, and there were no books in my house, either. So we're both playing a little catch-up, but that just means we get to read more books than everybody else.

Nearly 20 members of the Reading Club hiked east Wednesday afternoon to the heart of Boyle Heights, where the festive music of a mariachi band let you know this was a big deal. Poet Marisela Norte was there, along with Los Angeles poet laureate and novelist Luis Rodriguez, who told the kids that reading and writing saved his life when he was close to throwing it all away.

The students mingled comfortably with Urrea, a decorated writer with a disarming manner, and they laughed at his stories about growing up in Tijuana with slightly off-kilter relatives. There was an aunt who had issues with the church and burned incense all day so God wouldn't give up on her, and a strange uncle who sent him out to steal holy water.

Dana Tsuruta and Candy Perez, from the reading club, were in hysterics as Urrea told his Spanglish-tinged stories. Tsuruta got to laugh twice, because she kept leaning into Perez for translations and then giggled again when she got the whole joke.

Perez, by the way, told me she has read seven books this year, so she might surpass the 45 she read last year.

When the event drew to a close, Kipen announced that members of the reading club could all grab a free book from Libros Schmibros, which is about to celebrate five years of bringing the people of Boyle Heights together. A few of the students waited for autographs as the sun fell out of the sky in a fireball, sending shafts of golden light slicing under the dome in the center of Mariachi Plaza, like something out of a book.