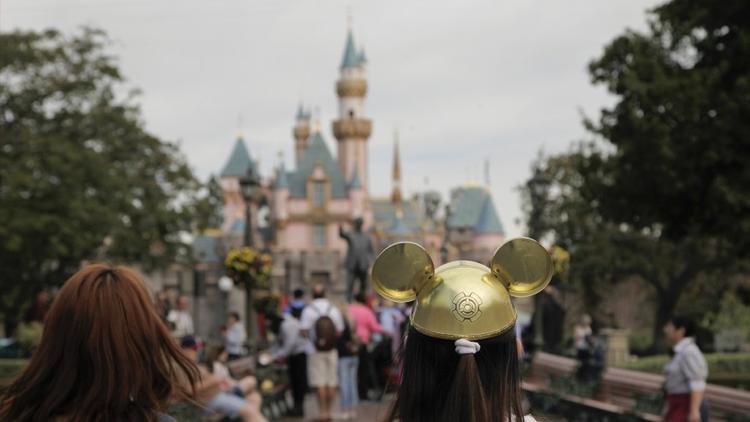 Disneyland in January, about a month after a measles outbreak linked to the amusement park. A new study says parental resistance to vaccinations played a role in the outbreak. (Jae C. Hong / Associated Press)

17 March 2015  ::  Although epidemiologists have not yet identified the person who brought measles to Disneyland, a new analysis shows that the highly contagious disease has spread to seven states and two other countries thanks to parents who declined to vaccinate their children.

Using some simple math, a team of infectious disease experts calculated that the vaccination rate among people who were exposed to the measles during the outbreak was no higher than 86%, and it might have been as low as 50%.

In order to establish herd immunity, between 96% and 99% of the population must be vaccinated, experts say.

“Even the highest estimated vaccination rates from our model fall well below this threshold,” the researchers reported Monday in the journal JAMA Pediatrics.

The analysis underscores that, in preventing outbreaks, “it’s not just about policy but about compliance,” said Erez Hatna, an infectious disease modeler at Johns Hopkins University Medical School who wasn't involved in the study.

“It's a compelling analysis,” added Dr. Mark Schleiss, a pediatric infectious diseases expert at the University of Minnesota who didn’t work on the study either. “In light of its findings, it’s surprising we don’t see more of an outbreak.”

The research team, from MIT and Boston Children’s Hospital, calculated the range of likely vaccination rates based on a few key data points. Based on historical data, infectious disease experts know that in the absence of any vaccination, a single person infected with measles can spread it to between 11 and 18 other people. They also know that it takes 10 to 14 days for one measles case to lead to another.

The last variable in their equation is the number of people in a semi-vaccinated community who actually become infected after exposure to a single person with measles. Since this figure – called the effective reproductive number – isn’t precisely known, the researchers considered scenarios where it was as low as 3.2 and as high as 5.8.

In other words, the only way to explain how the measles spread from a single person at Disneyland to 145 people in the U.S. and about a dozen others in Canada and Mexico is that a substantial number of parents have not had their children fully immunized with the measles, mumps and rubella vaccine.

“Clearly, MMR vaccination rates in many of the communities that have been affected by this outbreak fall well below the necessary threshold to sustain herd immunity, thus placing the greater population at risk as well,” the researchers concluded.

Measles is a highly infectious viral disease that remains a leading cause of death in children worldwide. After patients cough or sneeze, the virus particles can survive as long as two hours on doorknobs, hand rails, elevator buttons and even in the air.

Despite the fact that a vaccine has been available for decades, about 400 people died from the measles every day in 2013, according to the World Health Organization. Before vaccination became widespread, the disease killed about 2.6 million people per year, the WHO says.

The index patient in the 3-month-old Disneyland outbreak was probably exposed to the measles overseas and then visited the Anaheim amusement park while contagious, according to the Centers for Disease Control and Prevention. This particular strain of measles is identical to one that spread through the Philippines last year, where it sickened about 58,000 people and killed 110.

No deaths have been traced to the Disneyland outbreak.

Public health officials do keep track of vaccination rates. In California, for instance, the state Department of Public Health reported that 92.6% of kindergarten students had received at least two doses of the MMR vaccine in the 2014-15 school year.

So why did the study authors go to all this trouble? In an outbreak involving a major tourist destination like Disneyland, there is no single state, county or school district that can report the overall vaccination rate, the researchers wrote. As a result, mathematical modeling like this may give a clearer picture than any individual government agency.

The study authors said the scope of the Disneyland outbreak is certainly a reflection of the anti-vaccination movement, which continues to grow despite overwhelming medical evidence that the MMR vaccine does not cause autism or other developmental problems. In most cases, side effects are limited to pain at the injection site, fever, a mild rash or temporary swelling, according to the CDC. In rare cases, children may have a severe allergic reaction to the vaccine or develop febrile seizures, joint pain, temporary arthritis or a blood disorder called immune thrombocytopenic purpura.

The problem is that some parents are more scared of the MMR vaccine than they are of the measles, said Dr. William Schaffner, a specialist in infectious diseases at Vanderbilt University’s School of Medicine. In most cases, these parents have no first-hand experience with measles or other dangerous childhood illnesses that used to be common.

“They don’t fear or respect measles, so they don’t value the vaccine,” Schaffner said.

In Orange County, where Disneyland is located, the outbreak has sickened 35 people, including 14 children. Two of those children were too young to be vaccinated, and another had received only one of the two doses that are recommended, according to the Orange County Health Care Agency.

“This underscores the importance of vaccination in preventing the spread of measles, and protecting children who are too young to be vaccinated,” said Dr. Eric Handler, Orange County’s public health officer.

Three California state legislators have introduced a bill that would make it more difficult for parents to opt out of vaccinations by claiming a personal belief exemption. The bill, SB 277, would require children to be vaccinated against measles and other infectious diseases before enrolling in California schools.

One of the sponsors of the bill is Dr. Richard Pan (D-Sacramento), a pediatrician.

5:30: This story has been updated to include the comments of Dr. Mark Schleiss of the University of Minnesota and Dr. William Schaffner of Vanderbilt University.

3:54: This story has been updated to include the comments of Dr. Eric Handler, Orange County's public health officer.

3:36: This story has been updated with new measles case totals that were released by the CDC on Monday. It also includes information about the measles outbreak in the Philippines in 2014 and mortality figures from the World Health Organization.

2:15: This story has been updated to include the comments of Erez Hatna, an infectious diseases expert at Johns Hopkins University.

Noon: This story has been updated to include more detail from the study as well as information about efforts by California legislators to end the personal belief exemption that allows parents to opt out of vaccinations for their children.

The first version of this post was published at 11:03 a.m.