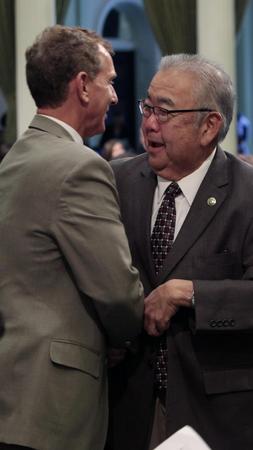 March 9, 2015  ::  Former Los Angeles School Board President and Assemblyman Warren Furutani said Thursday he will run next year for the 35th Senate District seat against Assemblyman Steve Bradford now that incumbent Isadore Hall is planning to run for Congress.

Furutani, 67, said he has represented two-thirds of the Los Angeles County district between serving on the school board, the Los Angeles Community College District Board and as a Democratic member of the state Assembly, which he left in 2012.

“It’s not a new area for me,” said Furutani, a Gardena resident.

He said education remains a priority for him.

“When I was in the Assembly there were some policy things I really was working on, some policy issues — career technical education, workforce development — and I want to keep doing the policy work around those education programs,” Furutani said. “We have to look at education differently.”

<<Then-Assemblyman Warren Furutani in 2012, being congratulated by then-Assemblyman Bob Wieckowski after his pension reform bill was approved by the Assembly. (Rich Pedroncelli / Associated Press)