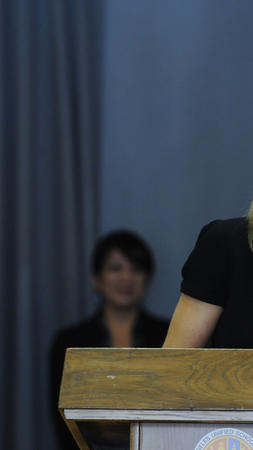 March 4, 2015, 10:52PM  ::  Over the last few months, Los Angeles teachers union leaders have racked up a series of victories. They worked to push out Supt. John Deasy, elect a friendly candidate to the school board and win a ruling against a new evaluation system.

But after Tuesday's election, the union's leadership is facing new challenges and a potent adversary.

Tamar Galatzan is backed by charter supporters and opposed by the teachers union. She faces a runoff.

The election results were not exactly the outcome the union had hoped for. A charter schools group, which emerged as a major force in the elections, made significant strides. In a contest that United Teachers Los Angeles fought hard to win, union-backed incumbent Bennett Kayser finished second to charter school founder Ref Rodriguez.

They will be matched up in a spring runoff. Two other incumbents also face runoffs in May; the union had sat out those races.

Both sides tried to put a positive spin on the outcome.

UTLA President Alex Caputo-Pearl said he felt "very good" about the union's chances to elect a board with a common vision of how to improve schools.

Gary Borden, executive director of the California Charter Schools Assn. Advocates, echoed the union's sentiments. "We feel really good about the results on the whole. We feel the right people won, the people who were the best choice for the kids of Los Angeles, including those in charter schools."

The election set the stage for the coming months in the nation's second-largest school system as the union pushes its agenda — a new contract with an 8.5% pay raise this year and influence over district policy — and charter forces push theirs, including less resistance to allowing new and existing charters to operate. Charter schools are publicly funded but independently operated; most are non-union.

The incoming board must choose a new superintendent. It will also confront difficult spending decisions, including how to proceed with a derailed iPads-for-all project that is under investigation by the FBI.

Tuesday's results created an opportunity for the union: Two-term incumbent Tamar Galatzan, with 39% of the vote, faces a runoff because she failed to win a majority against five challengers. She faces retired Principal Scott Mark Schmerelson, who received 20% of the vote.

The union said Wednesday that she should be ousted from her San Fernando Valley seat.

Caputo-Pearl said the results showed "a sharp rejection" of Galatzan. Union leaders denounced her support both for the troubled iPad program and for Deasy.

"It is time for Galatzan to follow in Deasy's footsteps out the door at LAUSD," the union said in a statement.

Galatzan has said that other board members also supported the iPad technology effort and that it's important to provide computers to students who can't afford them.

This race is expected to become another head-to-head battle between the union and the charter group.

Defeating Galatzan, Borden said, would be "a big hill for UTLA to climb."

The challenge for UTLA includes finding enough money to pay for two expensive board campaigns at the same time. The charter group is expected to rely on wealthy donors who largely funded the political action committee.

The charter group relentlessly attacked Kayser for failing to stop the iPad project. His supporters have defended his record, noting that he became an early critic of the effort.

Kayser took 36% of the vote, compared to Rodriguez's 39%. The district encompasses Los Feliz, Eagle Rock and the cities of southeast Los Angeles County.

L.A. Unified, he said, took millions of dollars in school construction bonds to purchase iPads that the school system was not ready to use effectively in the classroom. "The voters didn't like that," Amoni said.

The union has not taken a position on two-term incumbent and board President Richard Vladovic, who also faces a runoff. Caputo-Pearl said the union has maintained good relations with him in the past. Charter advocates said they too have worked well with Vladovic.

Vladovic's opponent will be Lydia A. Gutierrez, a teacher in the Long Beach Unified School District. He received 43% of the vote; she captured 38%.

UTLA's first step toward strengthening its position on the board was accomplished in August, when union-backed George McKenna won a special election to replace the late Marguerite Poindexter LaMotte.

McKenna also was on the ballot Tuesday, but was unopposed.

Once in office, McKenna became part of a governing body with eroding confidence in Deasy, who resigned under pressure in October.

Many teachers celebrated his departure