INVESTING IN TEACHER PAY COULD SPUR BIG GAINS FOR CALIFORNIA STUDENTS: Is the time right for California to try a new model to improve student learning? + smf’s 2¢ 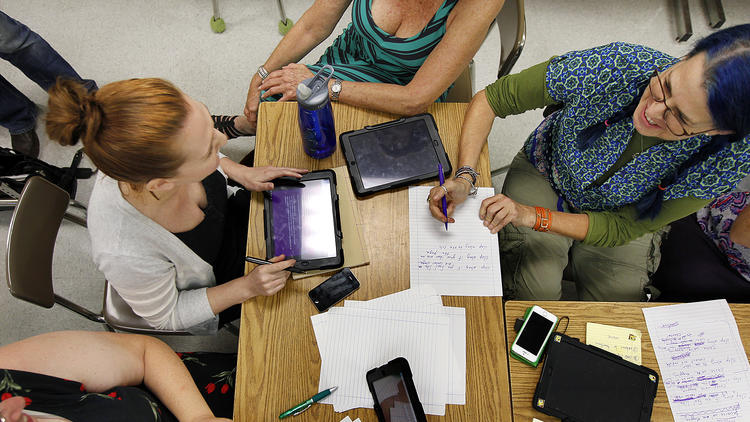 March 9, 2015  ::  In Silicon Valley and Silicon Beach, high-tech companies help drive the California economy by paying high salaries to driven, talented employees whose productivity more than compensates for their high pay. But California's public schools are stuck in the old mode of paying modest salaries for modest results from teachers, most of whom are talented and very hardworking. A smarter way? Open two dozen schools, pay the teachers $125,000 annually, give them more professional responsibility and expect more from them, and then see what happens.

Why now and why invest in teacher salaries? The state's budget is finally recovering from a devastating recession. That makes new investments in education possible for the first time since the 1990s, when the state started reducing class size. That move in 1996 has now cost more than $25 billion. Unfortunately, the student achievement payoff for this investment appears to have been quite small. One study of the California's class size reduction found that that it increased the number of third-graders reading above the national average by a meager 2 percentage points. That's very little bang for very many bucks.

Today, we have direct evidence from a New York program that a very different way to invest in schools works, and at a surprisingly low cost. Five years ago, The Equity Project charter middle school, or TEP, in New York City set starting teacher salaries at $125,000. An independent research firm, Mathematica Policy Research, has found that TEP is extraordinarily successful for students. For four years running, its mostly low-income, Latino students outperformed similar students at comparable N.Y. schools with test score gains equal to an extra 1.6 years in math and by smaller gains in science and language arts.

Open two dozen schools, pay the teachers $125,000 annually, give them more professional responsibility and expect more from them, and then see what happens. -

Teaching is tough everywhere, but at TEP, it may in some ways be even tougher because the high pay brings high expectations for performance. Not all teachers who sign up for the high-pay experiment make the cut. But TEP found plenty who did.

Taxpayers and savvy politicians should immediately ask, "What's the tab?" In New York, the extra cost was zero. TEP has slightly larger class sizes than a typical middle school (31 students compared with 27), fewer fringe benefits to match those in the private sector and requires teachers to work extra hours to replace many administrators. Together, these changes fully funded the higher teacher pay.

But would it work in California? Such an experiment would probably cost a bit more than zero because it doesn't make sense to increase class size here. TEP classes have averaged 31 students, which is larger than the typical New York City class size but not that different from typical California class size. It may well make sense for California to put in just enough extra money to keep the class size at about 31, rather than increasing it to 34. That's affordable in this economy, and higher teacher pay needs to be cost-effective for this plan to work.

Our research shows that California teachers earn an average of 85 cents on the dollar when compared with what other college graduates with full-time jobs earn. That's better than in most states, but not nearly adequate to attract enough of the best and brightest into the public schools and keep them there.

Successful tech companies don't only ask whether they're paying more or less than average, they also focus on who they must hire to produce a successful product. That is why some companies pay salaries that are well above what might be considered necessary to staff particular positions. The pay is for quality, not just bodies. Paying for quality is a model that works.

Educational opportunity is knocking. California should invest modestly now in trying out the high-pay/high-performance teacher model. If results here match those in the New York experiment, California will have a path forward to achieve big student gains for a fairly small taxpayer investment.