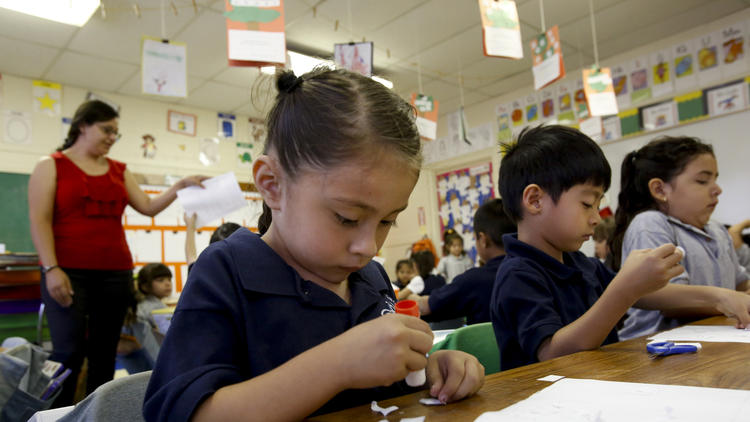 Kindergarten teacher Claudia Garcia, left, gives instructions as students work on projects at Magnolia Science Academy #7 in Northridge, which is one of three schools ordered shut down by the L.A. Unified School District last year. The school board has dropped efforts to shut the schools down. (Anne Cusack / Los Angeles Times)

Caprice Young, chief executive officer of the Magnolia Public Schools, hailed the Board of Education for renewing the charters of campuses in Palms, Northridge and Bell under a legal settlement approved this week. Charters are independent, publicly funded campuses; most are non-union.

The statewide charter organization, which enrolls 4,000 students in 11 academies focused on science and math, had denied allegations of financial mismanagement and sued the district last year to overturn the decisions to close the campuses. A court injunction has kept them open.

"This is just plain good news and will give the schools the stability they need," Young said Wednesday. "I am thankful to LAUSD for giving us the opportunity to let us do our job well."

Under the settlement, Magnolia agreed to bring in a new auditor and an educational services provider and submit to fiscal oversight by a state financial management organization. An audit performed last year for the district’s Office of the Inspector General found that Magnolia was $1.66 million in the red, owed $2.8 million to the schools it oversees and met the federal definition of insolvency. The Palms academy also was insolvent, the audit found.

In addition, the review found fiscal mismanagement, including a lack of debts disclosure, weak fiscal controls over the principals’ use of debit cards and questionable payments for immigration fees and services.

Since then, Magnolia hired Young, a former L.A. Unified school board president, along with a new chief financial officer and controller. The organization also has added new controls over spending, staff training and other improvements.

"It's actually very common for charter organizations to face operational challenges when they've just come through a heavy growth period," Young said. She added that Magnolia was now "fiscally stable and sound."

District officials have acknowledged that the Magnolia schools are performing well academically, with test scores well above the state's target of 800 on the 1,000-point Academic Performance Index.

Young added that the foundation has taken other steps to address concerns raised in the audit, including freezing the use of H1-B visas to bring in foreign teachers and administrators. Young said Magnolia schools currently employ 11 staff members on such visas but that she hoped to work with L.A. Unified to improve the process before continuing it.

She also dismissed concerns that the schools may be improperly influenced by a U.S.-based Turkish cleric, Fethullah Gulen. Critics have asserted that the Magnolia schools are among more than 100 campuses with ties to Gulen and seek to cultivate pro-Turkey sentiments.

"I think it's unfounded," she said of the criticism. "I wouldn't criticize anyone of any ethnicity or national origin for starting a great school."

She noted that 85% of Magnolia students were Latino, many of them low-income. She said programs to share Turkish culture through language study and other programs would enrich students, just as other charter schools offer classes in Arabic, German, Spanish and French. She also said the schools follow California learning standards, which require lessons about the Armenian genocide at the hands of the Ottoman Turks.

Young said the campuses in Bell and Northridge have extensive waiting lists, and the Palms school is near capacity.

This July 24, 2014 file photo shows students enrolled at Magnolia Science Academy 6 and Magnolia Science Academy 7 and their parents protesting LAUSD's efforts to close the schools over alleged financial problems. On Tuesday, March 10, 2015, LAUSD announced it had settled its legal feud with Magnolia, which allows three area academies to stay open. (Photo by Gene Blevins/Special to the Los Angeles Daily News/File)

Posted: 03/11/15, 7:52 PM PDT   ::  The Los Angeles Unified School Board has voted to settle a legal feud with Magnolia charter schools, in a move that would let three area academies stay open following efforts to shut down the campuses for alleged financial problems, according to officials.

Board members reached their decision in closed session and did not comment after the vote was reported in the public portion of Tuesday’s meeting. LAUSD will be keep the specifics of the agreement confidential until it’s finalized.

As part of the settlement, Magnolia has changed its top staffers, contracted out administrative work and expanded its governing board so a majority will be new members, Magnolia Educational and Research Foundation’s Chief Executive Officer Caprice Young said.

“It’s all big changes in how we run the organization,” Young said.

Young was part of Magnolia’s leadership change. The former LAUSD board member and founder of the California Charter Schools Association was appointed to head the organization in January.

The schools had been under pressure from LAUSD to change leadership, and the two sought to settle a legal action out of court.

In June, LAUSD quietly moved to shut down academies 6 and 7 — in Palms and Northridge, respectively — alleging auditors had uncovered financial mismanagement and the campuses were financially insolvent. Magnolia officials have said the accusations amounted to sloppy accounting practices that were the result of efforts to save money by using inexpensive software and legal funding transfers between campuses.

Magnolia went to court, obtaining a temporary injunction that stopped the district from closing the two schools until the case went to trial. The court order questioned the authority of administrators to close the campuses without a school board vote. LAUSD subsequently took aim at Academy 8 in Bell, declining to renew the campus’ charter.

While the legal action would be ended by the settlement, the state continues to audit Magnolia, which operates eight campuses in LAUSD and three in other parts of the state. State auditors are expected to report their findings in April.

The allegations against Magnolia are of Misuse of Public Funds. Plain and simple.

No amount of “great schoolage” and kids on waiting lists forgive this. Ultimately this is a matter of law enforcement  - and the LAUSD Board – as public trustees and empowered with enforcing the charter law and protecting the public purse – have blinked/waffled/whatever.

I hate to be “zero intolerant” – but there are no waivers or mulligans for malfeasance.

Parental Choice does not give the right to parents to choose to send their kids to a bad school -- whether the school is bad because it does a crummy job of teaching students or managing the public’s funds. I consider Caprice Young a friend – but she has been brought in to save the day and impose order amidst fiscal chaos while framing and spinning and charming  the story of the chaos as something less than egregious.

The biblical metaphor of pouring oil upon the waters comes to mind – but ask the folks on the Gulf Coast – or in Alaska: Oily waters are not necessarily a desirable outcome!

The Board in its role as charter authorizer and overseer moved to suspend the three charters.  It may have dodged a public vote earlier – but it had authorized the superintendent to act in its behalf.  That’s what superintendents and Boards of Ed do.

Then the Board of Ed  went into closed session and changed their mind and/or had their minds changed.

The process of granting, suspending and reviewing charters is supposed to occur in Mr. Justice Brandeis’ “Disinfecting Sunshine”. Instead it happened behind closed doors in the guise of settling a lawsuit.