27 February 2015  ::  The sign hanging around Luis Blazer's neck listed the reason he was standing outside with thousands of teachers Thursday evening, calling on the country's second-largest school district to accept the demands of United Teachers Los Angeles.

Blazer has 45 students in his ninth-grade algebra class at Rancho Dominguez Preparatory School, a number he said is too high for him to effectively do his job. 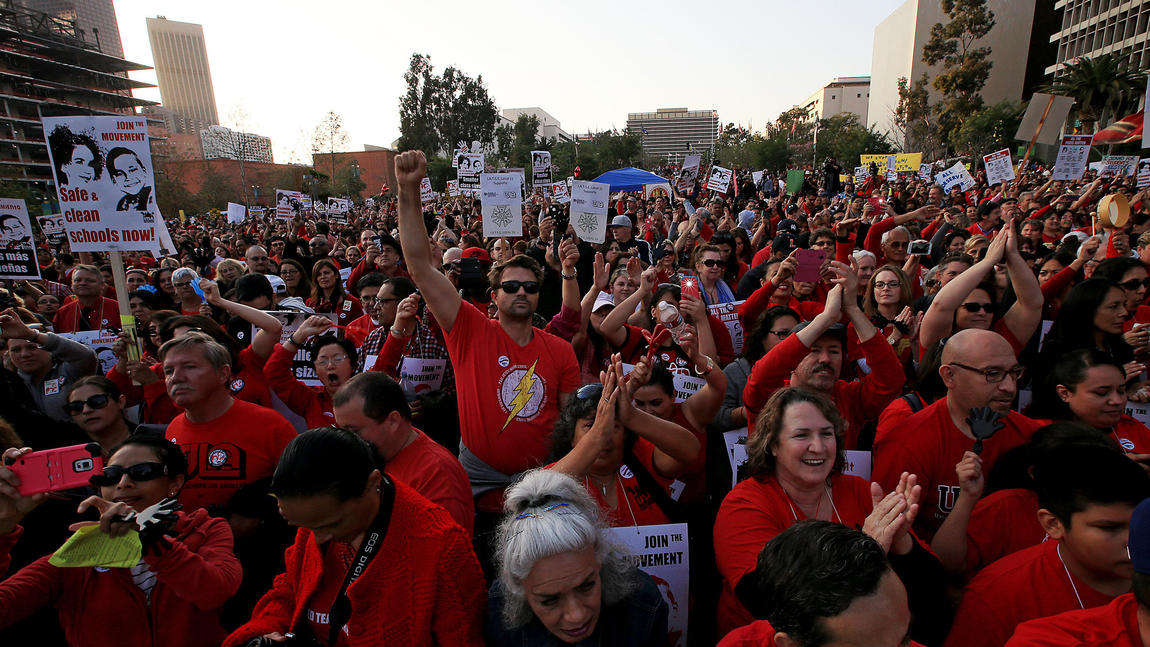 "Class size is the main reason I'm here," Blazer said. "If you have 54 minutes of class time and you have 45 students that means each student is getting less than two minutes of attention. No matter how good of a teacher you are, you're always going to lose the group."

Blazer, like many other educators who filled Grand Park in downtown Los Angeles, said that he is not financially prepared to strike but that he would if the Los Angeles Unified School District does not reach an agreement with the teachers union to reduce class sizes, raise teacher pay and develop a new system for evaluating teachers.

The district and the teachers union announced this month that they had reached an impasse in contract negotiations. Each side argues that the other is being unreasonable. The union is seeking a pay raise of 8.5%; the district has offered 5%.

"United Teachers Los Angeles promoted today’s rally weeks before it declared an impasse in labor negotiations," Supt. Ramon Cortines said in a statement. "We remain focused on securing an agreement, like we have with the majority of other labor partners at the Los Angeles Unified School District, which takes into account our fiscal reality and our commitment to students, teachers, support service personnel and the district at large."

UTLA President Alex Caputo Pearl, who estimated that 15,000 people attended the rally, told the crowd that district officials had offered no legitimate counter offer during negotiations. He said educators should flood the phone lines for the superintendent and board members, vote in Tuesday's school board election against candidates who have support from former Supt. John Deasy, and fill out commitment cards agreeing to escalating steps including protests on busy streets and striking, if necessary.

A sea of red shirts began filing into the park around 4 p.m. Educators wore signs calling for respect, better wages, and clean and safe classrooms. Some chanted: "Call your school board let them know, parents and educators run the show."

"We haven't been given a raise in eight years, yet my apartment has gone from $750 to $1,800 a month and I'm expected to pay that on the same salary," Blazer said.