February 20, 2015 2:20 pm  ::   Those attending this week’s meeting of the LA Unified school board’s Committee of the Whole got a sobering reminder of the horrific levels of violence some of the district’s students live with as Destiny Lopez, a 9th grader at the Miguel Contreras Learning Complex, stepped to the microphone and read from her winning Do the Write Thing Challenge essay.

“My father, as a result of being a gang member, became a quadriplegic, meaning he can’t move from the neck down as a result of him having been shot three times — once in his eyebrow, once in his upper lip and once in his arm, which is the one that did the most damage,” she said.

But the violence “didn’t stop there. There’s no one in the world who can stop all the violence in the world,” she added, explaining that her uncle, who was also a member of the same gang, was shot and killed. (See the full video of Lopez reading her essay below.)

Lopez and 8th grader David Berecca were the 2014 challenge winners chosen from LA Unified. Thirty communities across the country participated in the essay contest, which was launched in 1994. As part of the National Campaign to Stop Violence, it asks middle school students to write about how violence impacts them.

Two “national ambassadors” from each community visited the Library of Congress in Washington D. C. last summer to read their essays, which were printed and entered into the record.

Both Lopez and Berecca had been invited to appear before the committee, but Berecca couldn’t make it so Scott Folsom, a member of the Bond Oversight Committee and parent activist, stood in for him. While Lopez’s essay was straightforward and sobering, letting the sheer weight of her plain-spoken words carry the piece, Berecca’s read like a poem:

“I was bullied before. I couldn’t take the pain before. I couldn’t come out the door. I was in my room crying and being afraid, I just hoped that one day everything will change. I was thrown, pushed, socked in the arm. It hurt me more right here in my heart.”

The Do the Write Thing Challenge references Spike Lee’s 1989 award-winning film, “Do the Right Thing,” which explored race relations and the differing viewpoints on violent vs. non-violent acts of protest.

LA Unified’s participation in the program is organized by Lori Vollandt, the district’s coordinator of health education programs. Vollandt and the program were given an enthusiastic introduction by board member Steve Zimmer, who described Vollandt as “a leader the district, state and national level on youth violence reduction.” He also started explaining the program in detail before pointing at Vollandt in the audience.

“I’m stealing your whole presentation, I’m sorry. It’s a truly moving experience, and it’s one that we are proud to support,” Zimmer said.

Vollandt explained that students are asked to consider several different questions about how violence impacts them, including what they can do about it.

“That’s one thing that I like about this program, is it doesn’t ask what everybody else can do, but it takes that personal responsibility,” Vollandt said.

Lopez’s essay explained that she participates in charity walks and awareness programs to help battle violence, but also that “I will not let it define me but in fact make me a better person in life.”

IN THE INTEREST OF FAIRNESS TO DAVID BERECCA, WHO DESERVES FAR BETTER: His piece is a prose poem.

I was asked to read it – and at the last minute was asked to edit it. I did this word butchery unhappily and under protest; Eighth graders deserve better from adults; I knew it when I was one and I believe it all the more strongly now.

Here is his entire poem, as archived in the Library of Congress.: 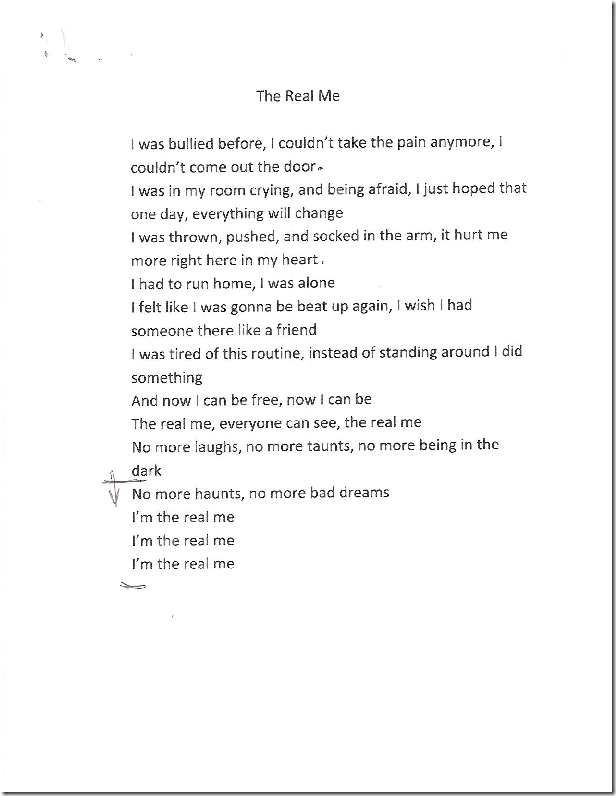 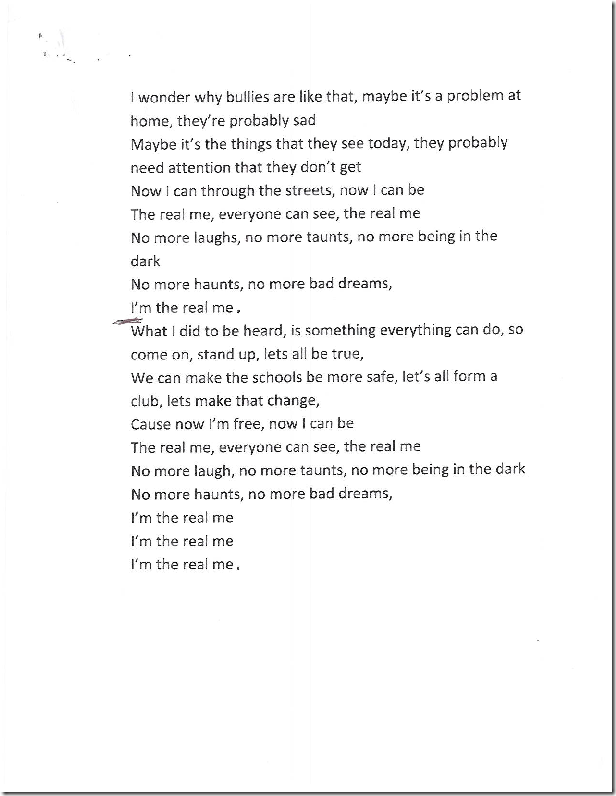