Following the money/Connecting the dots: CHARTER $CHOOL A$$OCIATION IS POLITICAL FORCE IN L.A. UNIFIED BOARD ELECTION 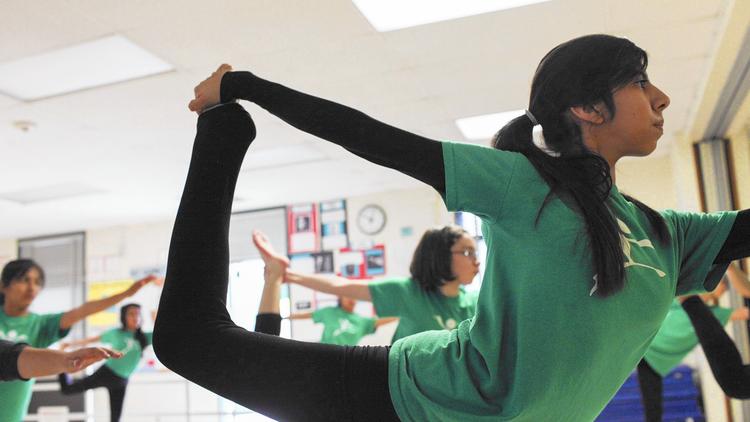 A dance class at Gabriella Charter School in Los Angeles. The next Board of Education will choose a superintendent for the nation's second-largest district and contend with the growing number of charter schools. (Andrew Renneisen / For The Times)

26 Feb 2015  ::  Los Angeles mayors once played the role of kingmaker in school board elections.

Both Richard Riordan and Antonio Villaraigosa took on the teachers union, leading campaigns to raise money for favored candidates. When those candidates won, the mayors influenced district spending, the hiring of superintendents and the direction of reforms — often over union opposition.

In Tuesday's election, this role has shifted to a statewide charter school group, which is raising money, sending mailers and rallying parents in an effort to become a permanent political force. The push comes at a crucial time for charter schools, which have been growing at a rapid clip in Los Angeles Unified despite concerns from some — including union officials — that they are sapping vital resources from traditional public schools.

The teachers union, United Teachers Los Angeles, is pouring money into the race on behalf of Kayser.

Another candidate for District 5 is parent leader and education consultant Andrew Thomas, who frequently reaches for middle ground between his two opponents.

Through Wednesday's campaign filings, the charter group had spent $699,688 to support Rodriguez. UTLA had spent $384,109 for Kayser. Those totals far surpass donations directly to the candidates as well as the spending totals for the other contested board races.

"At least for this election, and in board District 5, where it's going to be the most competitive race, this looks like a proxy war between the California Charter Schools Assn. and United Teachers Los Angeles," said Dan Chang, who heads a different political action committee that supports the same candidates as the charter PAC. [●●smf: Chang is a former member of Deasy’s staff and later worked for the the LA Fund, Deasy’s independent “Robin Hood’ fundraiser …and (some say) slush fund.]

Four seats are on the ballot for the seven-member school board. George McKenna, who recently took office in a special election, is unopposed. Two other incumbents, Tamar Galatzan and Richard Vladovic, are seeking to retain their seats in contested but lower-cost races. The union is silent in these races; the charter group endorses the incumbents.

The next Board of Education will choose a superintendent for the nation's second-largest district and face difficult decisions over how best to restore programs and staffing as funding recovers from the recent recession. L.A. Unified also is mired in contract talks with the teachers union.

Another challenge is how to deal with the growing number of charter schools, a main point of distinction between the candidates.

Charters are independently operated and exempt from some rules that govern traditional campuses. Most are nonunion.

According to the charter group, Kayser cast votes supportive of charter schools only 11% of the time. Kayser's vote was usually symbolic because the board majority regularly approved valid petitions for new charters, as required by state law.

But Kayser's reflexive opposition made him enemy No. 1 for charter advocates.

More than 100,000 students, or 15% of L.A. Unified's enrollment, attend charters, the most of any school system in the nation. State funding, at least $8,000 per student, goes to the charter school where a student enrolls, leaving fewer resources in L.A. Unified to pay for infrastructure, programs for the disabled, retiree pensions and benefits, along with other expenses.

For the union and many teachers, the anti-charter stance of Kayser, a retired teacher, has made him especially popular.

At campaign forums, Kayser, 68, said he initially supported charters as laboratories of innovation. But too many, he said, have become corporate-style franchises that hurt students by "taking away resources from the traditional public schools."

Rodriguez, 43, said that options for families should include charters, which have proven their worth.

Thomas, 49, said he sympathized with Kayser's points, but as a parent, he could not routinely oppose charter schools.

Charters are not the only issue that sets Kayser apart. He was, for example, the board's most steadfast opponent of former Supt. John Deasy, who resigned under pressure in October.

Before he left, Deasy had been part of a lawsuit that overturned traditional teacher protections, including tenure. Kayser has defended such job protections; Rodriguez said he generally supported the lawsuit. Thomas said teachers should be more accountable for performance but shared concerns that higher-paid veteran instructors could become targets for dismissal.

Deasy had strong support from charter advocates and key city leaders, who formerly organized behind Villaraigosa to raise money for school board elections. Mayors in Los Angeles have no authority over schools, but some have used their influence in elections to exert control, just as the union has tried to do.

Mayor Eric Garcetti has preferred to stay out of the fray.

"Now that Antonio Villaraigosa has left ... the existential question for this movement is: Can it stand on its own two legs?" said Ben Austin, who headed a group that helped dissatisfied parents revamp their schools. He was a part of the Villaraigosa coalition.

If the charter-led campaign doesn't prevail, "there's going to be real questions about the sustainability of this movement when a mayor is not leading it," Austin said.

Negative campaigning has obscured the candidates' differences. The charter PAC has paid for fliers that characterize Kayser as a racist and slumlord who wants to spend billions on iPads and keep child molesters in the classroom.

The allegations range from false to misleading. The same goes for union-funded fliers that depict Rodriguez, a career educator, as a profiteer who skirts financial disclosures rules.

Hastings, the largest recent donor to the charter group, said there was a natural overlap between what affects charters and other schools, such as funding, standardized testing and new state learning standards. But he does not want the association to stray from its core mission.

"Issues that don't affect charter schools," such as rules over teacher tenure at traditional schools, "don't make sense" for the charter group to be directly involved in, he said.

Under campaign law, the PAC decides what portion of its resources go to the L.A. races and what goes to campaigns elsewhere or lobbying activities.

The union won recent elections against the mayor's coalition after labeling its donors as rich outsiders and profit-minded business interests.

It hopes to do so again.

"There is a fundamental problem with outside entities coming into our community and dictating how our school board should look and what its policies should be," said Oraiu Amoni, the union's political director.

The charter group hopes it is immune from that stigma and that voters will identify instead with families who have left the traditional system, said Gary Borden, executive director of the charter PAC.

"These are public school kids with taxpaying parents — parents who are concerned about public education," Borden said.

Your seemingly heavily biased piece today cites several who have made millions from the charter industry (e.g. Borden, Chang, and Austin), and even quotes right-wing millionaires like Hastings. No doubt giving them the only voices in the piece, and casting simplistic the accusation that this is and issue of teacher union versus charter industry "heroes" is the easiest way to win Karin Klein's go-ahead.

Would have been nice if you considered citing a single public school supporter in the community. Karen Wolfe, David Tokofsky, Dr. Cynthia Liu, Ellen Lubic, Sonja Luchini, Scott Folsom, and a host of others that believe in public schools, rather than privately managed charters, should be able to speak for the large part of the community that doesn't stand for either union interests or charter sector greed.

As the runner up in the 2013 election, and a widely cited essayist on education, I'm always available for thoughts on these things as well. However, I understand that my speaking truth to power makes me somewhat of a threat to the deep pocketed interests in the charter industry. That said, I think we should be asking the question: "why is it that Rodriguez can run for the LAUSD PUBLIC school board, but NO member of the PUBLIC can run for his PUC charter empire board?"