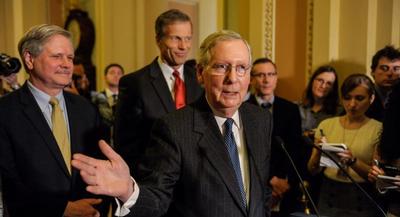 2/3/15 3:38 PM  ::  “As a victim of polio myself, I’m a big fan of vaccinations. And if I were a parent who had a child who might be subject to getting any particular disease, I would come down on the side of vaccinations,” McConnell told reporters.

McConnell was careful not to argue that the practice should be required by the government and said he was speaking only for himself and what he would do as a parent today.  Photo:  JOHN SHINKLE/POLITICO

MEASLES INFECTS POLITICS: Vaccinating children has become a major political issue following the Disneyland measles outbreak. President Barack Obama has forcefully weighed in to urge parents to vaccinate. Republicans are walking a line between standing up for public health and making clear that they want to avoid government mandates. And state lawmakers are pushing for bills that might make it harder to exempt kids from immunization. For example, in California and Arizona, two states hit hardest by the current eruption of measles, lawmakers are introducing measures that would make schools' immunization rates public. Elsewhere, state lawmakers aren't giving up on immunization opt outs for children - but their efforts haven't turned into legislative victories. Pro Health's Natalie Villacorta and Pro Deputy Managing Editor Nirvi Shah report: http://politico.pro/1Dqwu8s

The American College Health Association issued an advisory encouraging institutions to counsel students who seek non-medical waivers from required vaccines and to consider excluding unvaccinated students from campus during outbreaks of disease. Students at several colleges, including some in California, have contracted measles, but it's not clear whether that's linked to the Disney outbreak. The advisory: http://bit.ly/16bQ5yc