FROM YOUNG CANCER PATIENT’S PARENTS, A SPECIAL PLEA TO VACCINATE 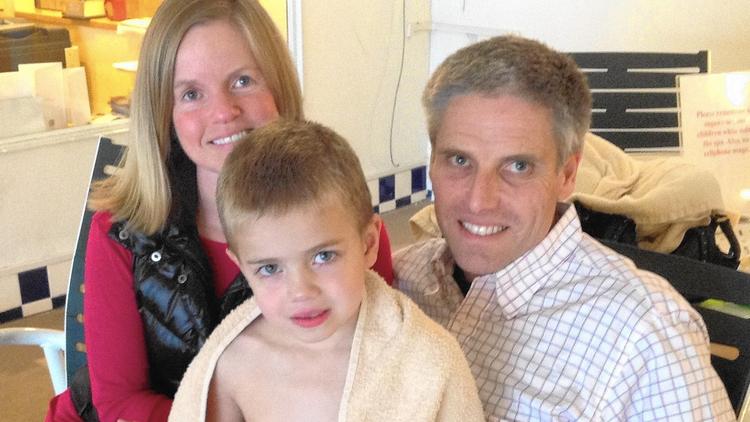 Rhett Krawitt can't be vaccinated against measles because of a compromised immune system, so he and his family rely on others to have their children vaccinated. (Robin Abcarian, Los Angeles Times)

6 Fen 2015  ::  Cancer patient Rhett Krawitt is the public face of the pro-vaccination movement in Marin County

When I walked through the door of Carl and Jodi Krawitt's well-appointed hillside home the other day, I could tell their 6-year-old son Rhett was not super happy to see me. I'd interrupted him as he was getting ready for a swimming lesson. It was easy to read his expression:

Please mom and dad. Not another reporter?

I don't blame him.

Quite unexpectedly, Rhett has become the angelic public face of the pro-vaccination movement in California. Almost four years ago, Rhett was diagnosed with leukemia. He spent 156 nights total in the hospital, his father told me.

Rhett missed out on swimming lessons for years because he had a port in his chest that couldn't get wet. Although he looks perfectly healthy now, years of chemotherapy and other drugs have temporarily weakened his immune system. He can't yet tolerate vaccines.

When the measles outbreak was first reported, Carl, 47, asked the school superintendent to bar all non-immunized children from school to protect his son. Measles is highly contagious; it could impair or even kill an immune-compromised child such as Rhett.

Reed Union School District Supt. Steven Herzog could not do much. An order like that could only be made by the Marin County health officer, and because there were no reported cases of measles in the county, there was no basis for it.

After the story was reported on KQED's State of Health blog, then picked up by NPR, the Krawitts were deluged with interview requests. They have appeared on local news stations, plus CNN, two different MSNBC shows and Al Jazeera.

"We know this 15 minutes is going to end real fast," Jodi Krawitt said. "But it's such an important story and message, how could we say no?"

As of last fall, only 84% of Marin County schoolchildren had all their recommended vaccinations, according to the California Department of Public Health, far below the optimal rate for herd immunity. 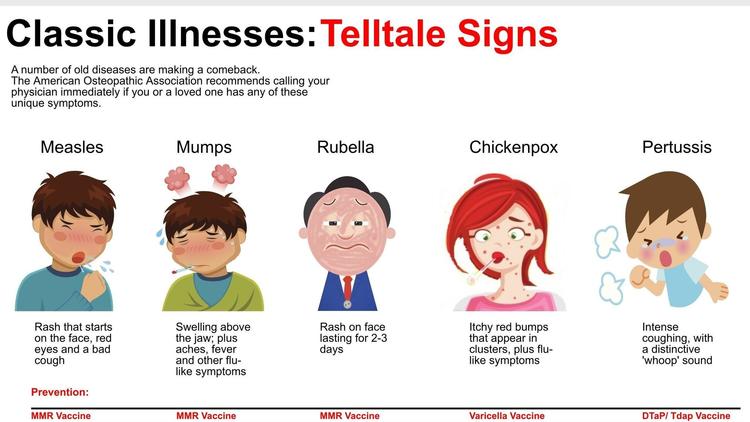 The hallmark signs of classic illnesses like measles, mumps, rubella, chickenpox and whooping cough. Thanks to vaccines, these diseases are unfamiliar to most Americans younger than 50. (American Osteopathic Assn.)

"We want to be up there at 95%," Marin County Supt. of Schools Mary Jane Burke told me Thursday.

This week, after two cases of measles were diagnosed in Marin siblings, Burke emailed a strongly worded bulletin to parents. "The greater good of the community demands that we take action to prevent any further spread," she wrote. "PLEASE GET YOUR CHILDREN VACCINATED!"

As we drove to Rhett's swimming lesson at the Mt. Tam Racquet Club in nearby Larkspur, Jodi, 45, who, like her husband is a management consultant, told me she could not figure out why so many informed, privileged parents refuse to vaccinate when all the science refutes the arguments against immunizations.

"It's become trendy, or cool, or a badge of honor, like a fashion statement, to say 'I don't do that,'" she said.

I happen to agree with "The Daily Show's" Jon Stewart, who was far more blunt. On Tuesday, he teed off on a woman named Tracy Skytt, who told CNN that her kids were vaccinated "for the most part."

"We live in Marin County, which is a liberal place," she said. "It's a well-educated group of people. It's a thoughtful group of people, so if they are choosing not to vaccinate there is probably a good reason."

Stewart was merciless: "Science-denying, affluent California liberals," he said, were guilty of practicing "a mindful stupidity." I asked Burke if the ridicule seemed too harsh.

"If the result is people in Marin County choosing to immunize their kids," she said, "it's worth every laugh."

This week, five California lawmakers, partly inspired by Rhett's story, said they would introduce legislation to tighten the state's lax policy for opting out of vaccinations, eliminating exemptions for religion or personal beliefs.

Only children with medical issues, such as Rhett, would be exempt. Gov. Jerry Brown, my Times colleagues Patrick McGreevy and Rong-Gong Lin II reported, has indicated that he is leaning toward supporting the bill. He should.

Measles was declared eradicated in this country 15 years ago. If it takes a law to get people to do the right thing for children — their own and everyone else's — I'm for it.

"This is not just about Rhett," said his pediatric oncologist, Dr. Rob Goldsby of UC San Francisco. "There are thousands of other children going through cancer therapy."

"Since this story came out, all the districts in Marin County have seen an increase in documentation of vaccinations," Herzog said. "We even heard there were lines of people trying to get immunized at Kaiser."

It doesn't really matter why — fear for their own children, or compassion for Rhett. When the young are in danger, the herd knows what to do.