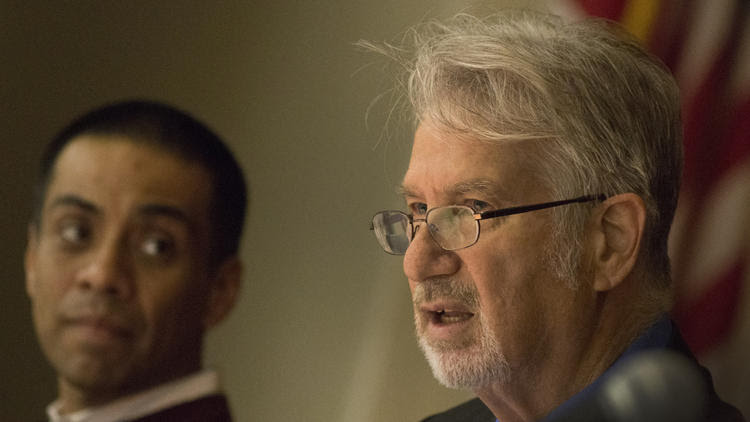 15 May, 2015  ::  Total spending in the battle for three spots on the Los Angeles Board of Education has increased sharply since the March primary, reaching nearly $4.6 million, as interest groups vie to influence the nation's second-largest school system.

The top spender is a group supporting charter schools, which has poured in more than $2 million. Next are committees controlled by the teachers union and its allies, which have spent more than $1 million. These groups are backing opposing candidates in two races, but have settled on the same candidate in a third.

These organizations aren't the only special interests involved. A relatively new political action committee, allied with the charter group, has joined the big money ranks. And a union representing non-teaching employees also could have an effect.

The results of Tuesday's election could shift the ideological balance of the seven-member board, affecting the choice of who would take the helm as the next superintendent of schools. Current schools chief Ramon C. Cortines, 82, agreed to serve another year as a search gets underway for a successor; he returned from retirement last October after John Deasy resigned under pressure.

The board also faces key budget decisions and must develop a new teacher evaluation system with the union.

The election also could affect district policy related to charters, which are independently managed and free from some restrictions that govern traditional public schools. Charters are not obligated to hire union employees.

L.A. has more students enrolled in charter schools than any district in the nation.

The future of charters are at the heart of the most heavily contested race. One-term incumbent Bennett Kayser typically resists creating new charters or renewing existing ones. His opponent is Ref Rodriguez, co-founder of one of the largest local charter-school organizations.

Kayser represents District 5, which encompasses neighborhoods north and east of downtown and the cities of southeast L.A. County.

California Charter Schools Assn. Advocates has put $1.8 million into unseating Kayser. More than half a million dollars has gone into negative advertising against him.

"We're expecting a low turnout, possibly as low as 8%," said Gary Borden, executive director of the charter group. "But the folks who went to the polls for Ref in the primary care deeply about his campaign and we're optimistic that they'll make sure to vote for him again in the runoff."

A New York-based group, Students for Education Reform, has spent about $47,000 to assist local college students in campaigning on behalf of Rodriguez.

United Teachers Los Angeles, meanwhile, has spent more than $800,000 on efforts to keep Kayser in office.

Kayser finished second to Rodriguez in the March primary.

In all, independent expenditures, as this outside spending is called, outpace donations made directly to the candidates by a 7-1 ratio.

Outside spending for Rodriguez in the general election has far surpassed the amount in the March primary. Kayser has lacked a similar boost. Spending on his behalf was lower through Thursday.

Part of the reason is that the teachers union has split its resources by becoming involved in a second race. It's now also backing retired principal Scott Schmerelson. He emerged from a crowded primary as the challenger to two-term incumbent Tamar Galatzan in District 3, which covers much of the West San Fernando Valley. Galatzan finished first in the primary.

The union has spent more than $440,000, waging a positive campaign for Schmerelson and a negative campaign against Galatzan.

The charter group has spent $200,000, about half of it to wage a negative campaign against Schmerelson.

The outside expenditures in this race exceed donations directly to the candidates by nearly 9 to 1.

The other big spender in this contest (about $435,000 through Thursday) is Great Public Schools Los Angeles, a political action committee vying to fill the void left in school elections by a PAC that was allied with Antonio Villaraigosa, who was mayor at the time. The new PAC has appealed to many of the same donors.

Although the new PAC has endorsed the same candidates as the charters, its issues are broader "than just charter schools vs. UTLA," said Dan Chang, the PAC's director.

The PAC's top three donors this year are banker and Wal-mart heir Jim Walton, former New York City Mayor Michael Bloomberg and local philanthropist Eli Broad. All were consistently supportive of policies pursued by Deasy and by like-minded district leaders across the country.

The charter group has used some of its funding for races outside L.A.

The charter group and the teachers union landed on the same side in District 7, which stretches from South Los Angeles to the Harbor area. Both are willing to stick with two-term incumbent Richard Vladovic, who also serves as board president.

The money player here is Service Employees International Union, which represents the largest number of full and part-time non-teaching workers in L.A. Unified. It's spent more than $112,000 in support of Vladovic and nearly $27,000 against his opponent, Lydia Gutierrez, an elementary school teacher in Long Beach Unified.

Vladovic's own campaign has raised about $170,000 compared to $34,500 contributed to Gutierrez. Outside money for Vladovic totals about $300,000. No groups have reported spending on behalf of Gutierrez.