L.A. HIGH SCHOOL VOTERS WHO ARE EAGER TO JOIN THE CAST 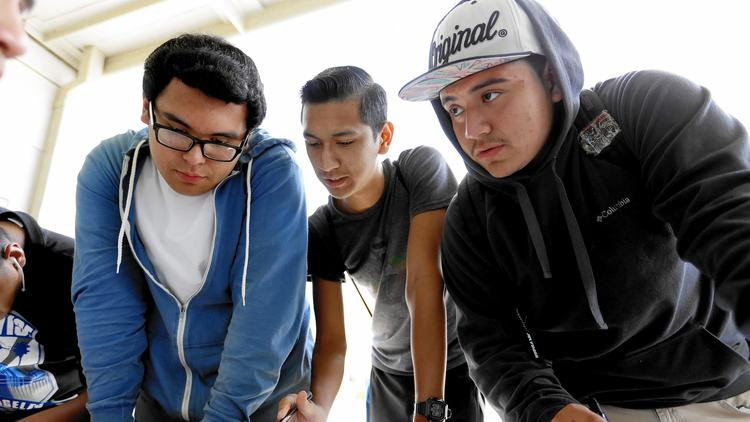 The students at Esteban Torres High had lots of ground to make up.

While some other Los Angeles schools had spent the last two weeks turning 2,600 students into newly eligible voters, Torres didn't begin its registration drive until Monday — the final day of a citywide #LAYouthVote campaign, sponsored by the United Way.

Student leaders on the East Los Angeles campus were hoping to recruit 100 new voters from among their classmates by the school day's end. They reached that goal by noon.

"Almost no one says 'no,'" senior Brenda Barbosa told me as she weaved through a lunchtime crowd with her clipboard and pen, buttonholing anyone who looked to be 18. 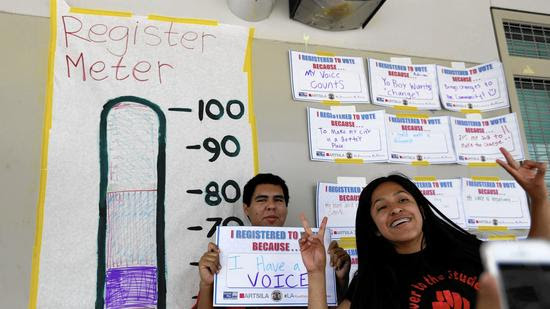 Carlos Vasquez, 18, left, poses for an iPhone photo at Esteban Torres High School as Isidra Varela-Rosas, 17, photo-bombs him as a joke. Vasquez had just registered to vote, and he wrote his reason on a piece of paper: "I have a voice." (Francine Orr / Los Angeles Times)

Even students who can't vote because they aren't citizens or aren't old enough were eager to be involved. "They had a lot of questions," said Donna Tapia, another student registrar. "They wanted to know how can they do their part."

Jose Lizarraga wasn't sure what his part is. "But I'm 18, so I'm going to have to do it sooner or later," he said, standing at a folding table loaded with registration forms. "I don't know much now, but I can learn."

Another check mark was added to the giant poster tallying student signups.

The lunch period had a celebratory feel, with music wafting across the field — a little Michael Jackson, a little Motown, a little Cumbia — and a group of girls doing the electric slide to a Spanish-language song.

Nearby, Carlos Vasquez, 18, stood for a photo that would make its way to Instagram. He was holding a sign with "I registered to vote because..." printed on a frame. I have a voice, was the reason he gave.

Taped to a wall behind him were a dozen similar proclamations: I registered to vote because ...

My mom and my dad can't.

It's my job to make the change.

The student-led effort took shape in the wake of a shameful turnout in the March 3 primary. Nine in every 10 registered voters in Los Angeles County sat that one out; it was the worst showing in the state.

My colleague Steve Lopez had stirred the pot with a column on students who were eager to cast ballots but too busy or too confused by the process to sign up before the deadline.

This latest registration campaign relied on more than appeals to civic duty: There were raffle prizes, including Dodgers tickets and laptop computers. Some civics teachers gave extra-credit points. And the school that registered the most students gets a pizza party for its senior class — with a special celebrity guest.

What the students weren't told is that the celebrity is Secretary of State Alex Padilla. I suspect that might have deflated an effort that needs all the pumping up it can get.

The challenge now is getting these new voters to actually vote. Young people tend to turn out at a lower rate than other groups on election day.

"There are some kids that, frankly, will tell you straight to your face: 'I really don't care,'" said Tammy Bird, a biology teacher at Carson High, which registered more than 200 students. "But fortunately, the majority are not like that."

Bird helped organize the campaign on her campus and talked it up among students. "In some classes, they were eager. They'd heard about it and wanted to sign up."

But students in one class were so dismissive, "I pretty much blew up," she said. "It was 'Thank you for being the picture of apathy in the dictionary.' That was frustrating."

Bird, who's been a teacher for 30 years, thinks the antidote to that apathy is education: Students need to feel a personal connection to issues they will help decide.

When California voters were considering labeling genetically modified foods, she had her students parse the pros and cons in biology class. "I said I would vote whichever way they decided. That gave them a sense of responsibility," she said.

"They knew that this is really important. And they learned that it takes work to get it right."

Most of the students I spoke with at Torres talked about the importance of voting the right people into office. Personality politics is all they know: You vote for whoever promises what you want.

But the issues that matter most to them — from stable school funding to safer streets — are bigger than one election cycle or a single candidate.

And while this registration campaign was geared toward the May 19 school board elections, its biggest dividend might be a broader sense of activism among students who feel invested and empowered.

"We're trying to preach to the kids that it's their civic responsibility," said Carson High teacher Karen Vernon. "They always have an opinion on everything. But sometimes they don't realize they have the power to make change.

"I think they are feeling that right now."