A new report by researchers at Teachers College's National Center for Children and Families describes troubling racial, ethnic and economic disparities in American preschools and calls on national early childhood organizations to take a stance on reducing segregation in preschool classrooms.

April 29, 2014  ::  Publicly funded preschools across the country are largely segregated by race and income, and poor children are typically enrolled in the lowest quality programs, according to a new report released Wednesday by researchers at the National Center for Children and Families at Teachers College, Columbia University.

While states more than doubled their investments in preschool between 2003 and 2013, when 1.3 million three- and four-year-olds were enrolled at a cost of $5.4 billion, most classrooms were economically segregated, the researchers found.

“If every child could be in a high-quality program, we could all go home and not worry about it,” said Jeanne Reid, who wrote the report with Sharon Lynn Kagan. It was funded by The Century Foundation, a left-leaning think tank, and the Poverty & Race Research Action Council, a civil rights organization. “But a lot of programs are not high quality, and low-income children are most likely to be in low-quality programs.” 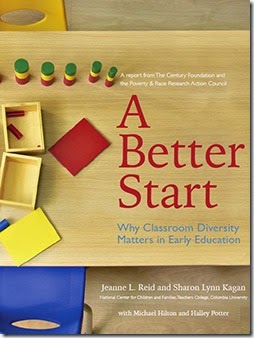 That’s especially troubling because research shows that children from low-income families benefit academically from being in a classroom with children from more affluent families, Reid said.

“When we talk about equity, it’s not just the idea that there should be equity of access to preschool but equity at the classroom level, in terms of who you share a classroom with,” she said. “A lot of attention hasn’t been paid to the difference that it makes. And there’s research that shows it does make a difference, along with the quality of the teacher, class size, use of a comprehensive curriculum.”

In state preschool programs, almost half of all children are in mostly minority classrooms and three out of four of those children come from low-income families, she said. About 17 percent of children are in classrooms that could be considered racially and socioeconomically diverse, Reid said.

They looked at research that examined the academic growth of groups of children from low-income families, some of whom went to preschool with other mostly poor children and some of whom attended economically mixed classrooms.

Those findings fall in line with research done at the elementary school level, including one 2010 study in Montgomery County, Md., which examined 850 children living in public housing who were randomly assigned to elementary schools. Students who attended integrated schools showed greater academic gains than those in high-poverty neighborhoods and schools, even though the high-poverty schools spent more per pupil.

One explanation for the differences in learning could be that better teachers are more likely to be found in affluent schools than in high-poverty schools. But studies that have controlled for differences in teacher quality have found the same effects, Reid and Kagan said.

President Obama has been promoting the idea of universal preschool, trying unsuccessfully to convince Congress to help states fund preschool for every 4-year-old from a low-income family. That would be in addition to Head Start, the federal government’s early childhood program for poor children from birth to age 5. Head Start served about 900,000 three-, four- and five-year-olds in the 2013-2014 school year at a cost of $7.3 billion.

Governors from both political parties and mayors in cities including New York and Seattle have heavily invested in preschool, arguing that it is one of the most effective ways to narrow the achievement gap between poor and affluent children. Advocates also say children enrolled in high-quality preschool gain lifelong benefits, such as better jobs, higher wages and a lower likelihood of being involved with the criminal justice system or needing social services.

Reid and Kagan highlight several preschool programs that have intentionally sought a balance between poor and affluent children.

Morris Jeff Community School, a public charter school in New Orleans, is one example. Morris Jeff has three preschool classes where 67 percent of the children are from low-income families and 33 percent are from more affluent families. The school receives a per-pupil subsidy of $4,700 from the state for each poor child and it charges the same amount in tuition from the affluent families. That money still doesn’t pay for the cost of running the all-day preschool classes; the school raises funds from private sources to make up the difference.

Reid and Kagan make several recommendations about ways to create preschool programs that are more socioeconomically balanced, touching on funding, transportation and location. <<Lyndsey Layton has been covering national education since 2011, writing about everything from parent trigger laws to poverty’s impact on education to the shifting politics of school reform.

●●smf’s 2¢: A commenter on the Washington Post page takes offense at the writer’s use of the word “segregation” – taking the position that this ain’t segregation, segregation was what there was back then …when I was growing up/back in the dark ages.

One can almost hear “kids nowadays” and see the five mile walk through the snow to the one room schoolhouse coming up in the narrative. I’m a geezer, albeit a white middle-class one. But I know geezerishness when I read it.

It was bad then and it isn’t good yet. No one has the exclusive rights to the the bad old days or the descriptors thereof any more than than anyone – not even Walt Disney – has the rights to The Great New Beautiful Tomorrow.  Uncle Walt has been gone for 49 years;  we aren't there yet and we keep creating new roadblocks+impediments for the youngest among us.

We certainly don’t need any semantic ones!