Alliance to Reclaim Our Schools and the Center for Popular Democracy  |  http://bit.ly/1cEj0OQ 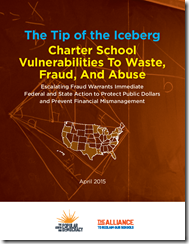 A year ago, the Center for Popular Democracy (CPD) issued a report demonstrating that charter schools in 15 states—about one-third of the states with charter schools—had experienced over $100 million in reported fraud, waste, abuse, and mismanagement. This report offers further evidence that the money we know has been misused is just the tip of the iceberg. Over the past 12 months, millions of dollars of new alleged and confirmed financial fraud, waste, abuse, and mismanagement in charter schools have come to light, bringing the new total to over $200 million.

The number of instances of serious fraud uncovered by whistleblowers, reporters, and investigations suggests that the fraud problem extends well beyond the cases we know about. According to standard forensic auditing methodologies, the deficiencies in charter oversight throughout the country suggest that federal, state, and local governments stand to lose more than $1.4 billion in 2015.b 1 The vast majority of the fraud perpetrated by charter officials will go undetected because the federal government, the states, and local charter authorizers lack the oversight necessary to detect the fraud.

Setting up systems that detect and deter charter school fraud is critical. Investments in strong oversight systems will almost certainly offset the necessary costs. We recommend the following reforms:

State and federal lawmakers should act now to put systems in place to prevent fraud, waste, abuse and mismanagement. While the majority of state legislative sessions are coming to an end, there is an opportunity to address the charter school fraud problem on a federal level by including strong oversight requirements in the Elementary and Secondary Education Act (ESEA), which is currently being debated in Congress. Unfortunately, some ESEA proposals do very little reduce the vulnerabilities that exist in the current law. If the Act is passed without the inclusion of the reforms outlined in this report, taxpayers stand to lose millions more dollars to charter school fraud, waste, abuse, and mismanagement.