Los Angeles Unified could reap up to $253 million extra if the state’s revenue projections live up to expectations of being $2.3 billion more than previously estimated.

When the governor’s May revise is released toward the middle of the month, it will let Los Angeles Unified know how much money it will have to spend in the fiscal year that starts July 1.

Cortines included a list of expenses the district will have to pay. The increased costs he cites are due to state mandates, including pension reform.

LAUSD’s contribution for teachers’ pensions will shoot up by 28 percent in the fiscal year that starts July 1. The contribution rate increased, because of state plans to make the system more financially sound.

If teachers collect 9.3 percent in pay raises that have been proposed for the upcoming year, the cost of pensions — which are based on salary — will increase even more.

The school board is poised to vote May 12 on the raises as part of a contract LAUSD estimates will cost $875.3 million. A few days later, the state will let LAUSD know how much money it will have to spend next year.

Revised revenue figures will be released by Brown’s office on or about May 15, but a definitive date has not been set, Brown spokesman Jim Evans stated.

Another factor in the amount of dollars LAUSD receives will be how far attendance has fallen. The state distributes dollars to school districts based on the average daily attendance of students.

LAUSD officials reported attendance numbers to the state April 21 but declined to release them to this news organization, because they have yet to share the figures with board members.

District officials have previously said they could ask the state to waive record-keeping requirements because attendance records were botched this year.

Adult education, which Cortines mentioned in his letter, stands to bear some of the steepest budget cuts.

LAUSD told 609 educators they could lose their jobs to budget reductions in letters mailed earlier this year. More than any other group, 261 adult school teachers received the legally required notices.

With a budget of about $94 million, the adult education program makes up about 1.3 percent of LAUSD’s $7.27-billion operating budget.

Cortines asked Brown to install timelines, because developing a budget without knowing how much money is available “can jeopardize the stability of adult education programs.”

“The state should ensure local consortia have timelines in place so district can appropriately plan to meet the needs of their students, such as contemplating course offerings, staffing levels, etc.,” Cortines wrote. 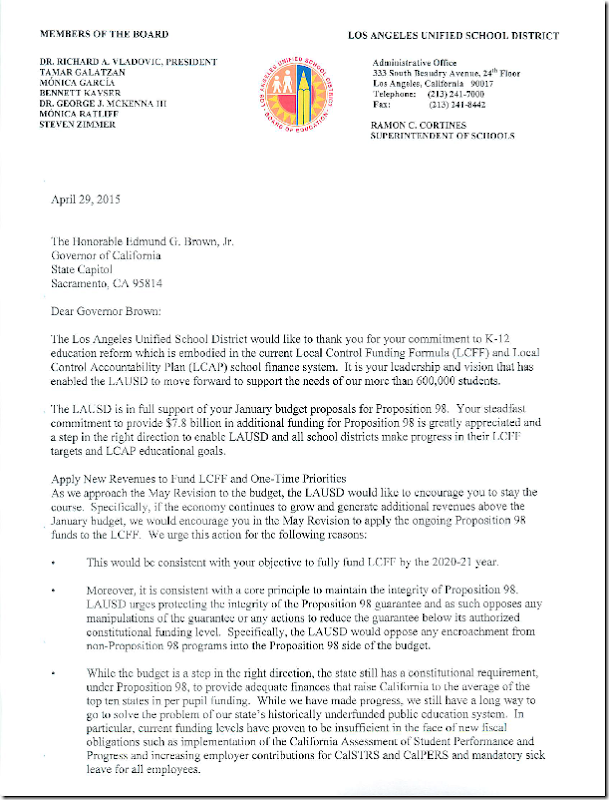 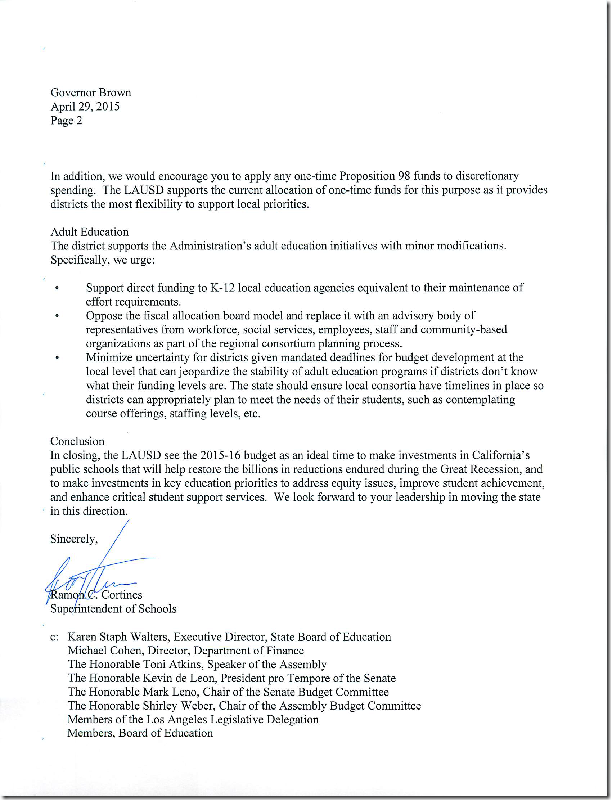