May 15, 2015 | 5:04 p.m [LA Times May 18] .  ::  The Burbank school district’s Parent Teacher Assn. is one step closer to influencing change across California with a resolution seeking to incorporate clear health standards into the state’s curriculum to address lesbian, gay, bisexual, transgender and questioning students, in addition to promoting an inclusive school environment for the young LGBTQ community.

The resolution won formal approval at the California State PTA convention in Sacramento earlier this month, and its passage still brings Steve Frintner to tears.

As Burbank PTA council president, Frintner’s voice broke with emotion as he shared the news with the Burbank school board last week, and he choked up again this week while discussing it during a phone interview.

“It’s been two weeks, and I can hardly talk about it without getting emotional about it,” he said.

The resolution was months in the making and not without outspoken opponents.

Its passage will allow lawmakers or state education officials to refer to the document should they introduce legislation or curriculum that would lead to sexual health education and learning materials acknowledging lesbian, gay, bisexual, transgender students and those who are exploring their sexual identity.

Burbank parents formed a committee to write the resolution at the start of the school year, based on the work of former John Burroughs High School student Brian Kaplun.

Now a freshman at Stanford, Kaplan, 19, wrote a bill while he belonged to Burroughs’ Junior State of America Club. In it, he advocated for health standards that deal with issues surrounding gender expression and identity, in addition to supporting a safe learning environment for LGBTQ students.

“From a personal experience, I’ve never been bullied as a result of being gay…There’s never been violence against me or anyone I know… but we still have a ways to go,” he said during the phone interview.

California education code prohibits discrimination based on students’ sexual orientation, and states that sexual health instruction and learning materials “shall be appropriate for use with pupils of all races, genders, sexual orientations, ethnic and cultural backgrounds, and pupils with disabilities.”

However, in Kaplun’s experience, many LGBTQ students have been marginalized during conversations about sexual health in the classroom, which are largely given in the context of heterosexual relationships, he said.

After writing the bill for the club, “I thought to myself, I want to make this a real thing. It’s a really important issue,” Kaplun said.

He then approached state Sen. Carol Liu, who suggested working with the Burbank school board. Roberta Reynolds, school board member and a longtime member of the PTA, advised Kaplun to take it to the PTA to draft a resolution.

“I thought this was a great idea,” Frintner said, and when he brought the idea to fellow parents, they responded with overwhelming support, some of them with transgender, gay or lesbian children, others without, but all in agreement that the issue needed to be addressed.

“It wasn’t a hard sell,” Frintner said. “Everyone was on board.”

For the next several months, the Burbank Council PTA resolution committee backed up the resolution with recent research citing cases of LGBTQ students dropping out of school or becoming depressed because they didn’t feel they belonged, or in the most devastating events, they physically hurt themselves.

“That’s why we really feel like it’s so important and such a big issue for us,” Frintner said.

The draft ultimately won support from First District PTA — encompassing all PTA groups from Burbank to Pomona, including the Glendale Council PTA, which paved the way for it to be introduced at the state level.

On May 2, the day it came down to a vote in Sacramento, opponents who spoke out against it said gender identity and sexual health education were topics that would be better left to discuss within the family home. Others approached the contingent of Burbank parents and students with gratitude and encouragement.

“This resolution means a lot to me because I have people that are close to me — best friends that went through high school and middle school not really being accepted for who they were,” Little said. “I do have friends and family who were affected either by bullying or weren’t fully understood by their peers.”

She added that students could also learn that it’s OK to have two moms or two dads in a more accepting environment.

As the vote came down from more than 600 delegates, the resolution secured about 60% approval, and Frintner sunk into his chair with overwhelming relief.

“I had to just stop for about five minutes,” he said. “I had to put things down and try and breathe, and it took me several minutes to compose myself before I could start paying attention again to the next order of business.”

Kaplun is hopeful that the resolution could spur legislative action.

“My personal goal is to work to actually effect real change,” he said.

The resolution will also go before voters at the National PTA convention in Orlando next year.

“As generations are going on, they’re becoming more accepting,” Little said. “I think it’s a very good time to start to become more aware of these issues. It’s to help everybody. Everybody has a voice, and everybody needs to be understood.” 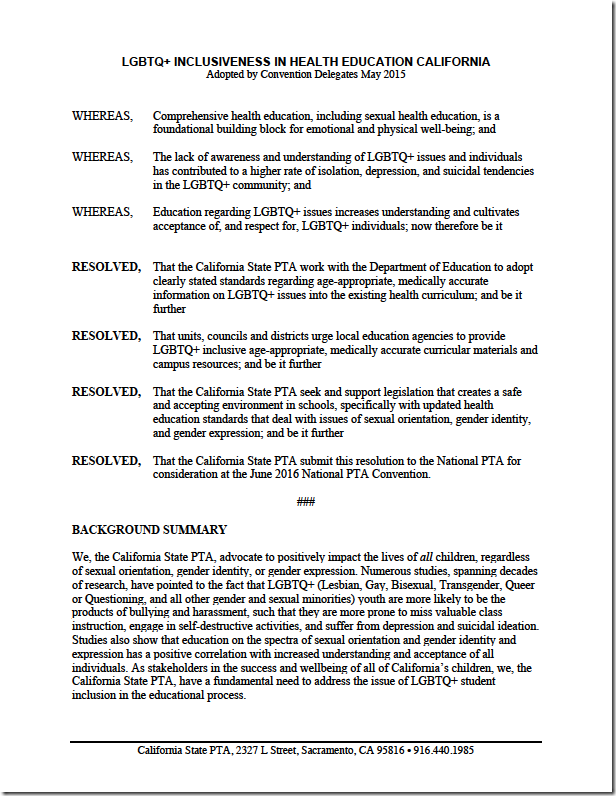