1989 law sends schools more than 80 cents on every new dollar: PROP. 98 MAKES SCHOOLS BUDGET WINNER, BUT IS IT STILL FAIR? 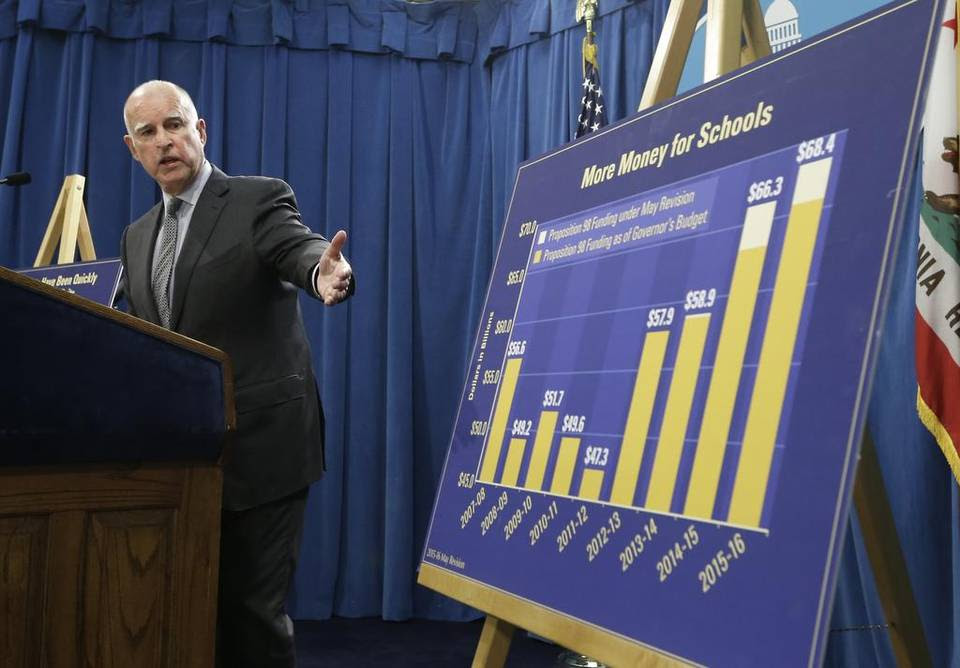 Gov. Jerry Brown gestures to a chart showing the increase in education spending as he discusses his revised state budget plan during a news conference at the Capitol on Thursday. | Rich Pedroncelli The Associated Press

15 May 2015  ::  Longtime education expert David L. Walrath was in the room when he and other school financial experts led by the late John Mockler wrote the California ballot measure that would become Proposition 98 in the fall 1988 election.

“It was very clean, very straightforward,” Walrath said of the proposal more than a quarter-century ago, which for the first time created a funding guarantee for K-12 classrooms and community colleges in the California Constitution. “It created accountability. You knew what was owed to schools.”

The guarantee has been a central ingredient in the state’s annual budget process ever since, but its impact perhaps has never been felt more than this year.

With several billion dollars in new tax revenue flowing into the state treasury, a confluence of complex budget laws means schools will absorb virtually all of it. The scenario has dismayed advocates for health and social programs, and prompted questions of whether Proposition 98 remains fair to other budget interests.

The Assembly’s budget committee leader recently acknowledged “98 envy” by health and welfare groups. The influential 325,000-member California Teachers Association and school allies have stepped up their defense of the guarantee. Advocates for the poor, meanwhile, have pressed their case on social media and suggested that the guarantee help pay for other programs, such as child care.

Walrath and other school officials make no apologies. The guarantee, they said, is still as necessary today as it was when it emerged in response to what advocates felt was lawmakers giving lip service to schools’ financial problems. California schools still lag behind many states’ per-student spending, they note.

“I think it’s fair,” said Dave Low, executive director of the California School Employees Association, which represents 250,000 workers at preschools, K-12 schools and community colleges. The Proposition 98 guarantee plummeted during the recession to preserve funding for non-98 programs, he said.

“You can’t have it both ways: ‘We want to cut you worse when times are down, but not pay you back when times are good,’” he said. “What’s happening right now is the way the law was written, and what the voters wanted.”

I think it’s a false choice if we’re pitting one against another. It’s kids vs. kids.

Advocates for children and the blind, elderly and disabled agree that schools deserve more money. But they point out that many other programs took cuts during the recession.

A quarter of California children live in poverty, according to the most recent census data.

“Among human service advocates there is mounting frustration with a lack of investment in the state’s safety net, post-recession, in general,” said Chris Hoene, executive director of the California Budget and Policy Center, which focuses on the budget’s effects on low-income Californians.

Frank Mecca, executive director of the County Welfare Directors of California, said it makes no sense that the world’s seventh-largest economy cannot adequately fund programs to help children inside and outside of the classroom. “I think it’s a false choice if we’re pitting one against another. It’s kids vs. kids,” he said.

Many of the Legislature’s majority Democrats have allies in both camps. “It is a conundrum,” said Laphonza Butler, president of the SEIU United Long Term Care Workers’ Union. SEIU represents 50,000 school employees and participated in a news conference this week to highlight schools’ fiscal needs. But Butler’s union also represents in-home care aides and other health and social workers with a stake in state funding.

“I think those educators are right. All of California got hit hard during the recession,” Butler said. “But our children don’t exist on an island. They have to be supported by families that have the resources they need to be productive citizens.”

Approved by a mere 128,000 votes, Proposition 98 passed in just 10 of the state’s 58 counties. The California Teachers Association, then-state schools superintendent Bill Honig and other school leaders backed the measure, which was opposed by then-Gov. George Deukmejian and others.

Two years later, another budget-related measure, Proposition 111, added more school guarantee language. It also created a process that allowed lawmakers to give schools less than the former guarantee during down years and later catch up to what it would have been to keep pace with economic growth – akin to a deferred pay increase.

Since then, the school funding laws have come to embody the increasing complexities of California’s budget. Mockler, the state’s premier education finance expert before his death in March, joked that he made the law complicated so people would need to hire him to explain it.

$5.5 billion of $6.7 billion in higher-than-expected revenue through June 2016 could go to schools.

The state, though, has never faced such a scenario of education, in the words of Assembly budget committee chairwoman Shirley Weber, “gobbling up the budget.” Of the $6.7 billion in higher-than-expected revenue through June 2016, $5.5 billion would go to K-12 schools and community colleges in Gov. Jerry Brown’s revised budget.

In 2012, the Brown administration adopted an approach to calculate the obligation to schools. The Legislative Analyst’s Office warned it could “produce not only impractical but nonsensical results” that in some cases could “lead to schools receiving almost exclusive benefit from any growth in state revenues.” Lawmakers, though, followed the governor’s lead. “We think we're reading the constitution literally and how it should be,” Department of Finance spokesman H.D. Palmer said.

Legislative leaders have touted this year’s budget benefits for schools.

“I think we’re breathing a huge sigh of relief that finally we can reinvest in education in a way that we haven’t done since pre-recession,” said Assembly Speaker Toni Atkins, D-San Diego. “Californians think that education is one of the top priorities, so this is good news.”

There are potential budget pathways that, as part of any legislative deal with Brown, could free up more money for non-school programs.

Lawmakers could return to the earlier method of calculating the catch-up obligation to schools. For higher-than-expected revenue of $5 billion to $6 billion, for example, the conventional approach would leave about one-half to one-third for non-school programs, while the governor’s method would take almost all of it.

Officials also have flexibility in how they allocate revenue growth to different fiscal years. That could reduce how much money goes to schools for 2014-15 while freeing up more money for other programs. Either move, though, would face strong opposition from school interests.

Money could materialize in other ways. Growing local property tax revenue could offset the state’s obligations to schools.

Some lawmakers want to put more programs under the Proposition 98 umbrella, such as child care. The Legislative Women’s Caucus has made additional child care slots a priority, and Weber said she and other Democrats will look for ways to use the school guarantee to pay for programs that “legitimately, rightfully” should be covered by it.

But a lobbyist for the California Teachers Association suggested this week that the powerful budget player would oppose the move. “Child care is not necessarily an education program,” said Estelle Lemieux.

There occasionally has been talk of revising the school guarantee, but nothing has ever come of it. In early 2005, then-state Sen. Tom Torlakson, now the state schools chief, introduced a constitutional amendment to change the law. Among other things, the proposed changes would have required lawmakers to pay off any school-funding obligations within three years. The measure never had a committee hearing and was scrapped a few months later.

Veteran education lobbyist Bob Blattner said the funding guarantee, like many state laws on the books, “certainly could use a tune-up.”

“But I would be hesitant to pull the plug before I knew what was behind door No. 2,” he said.