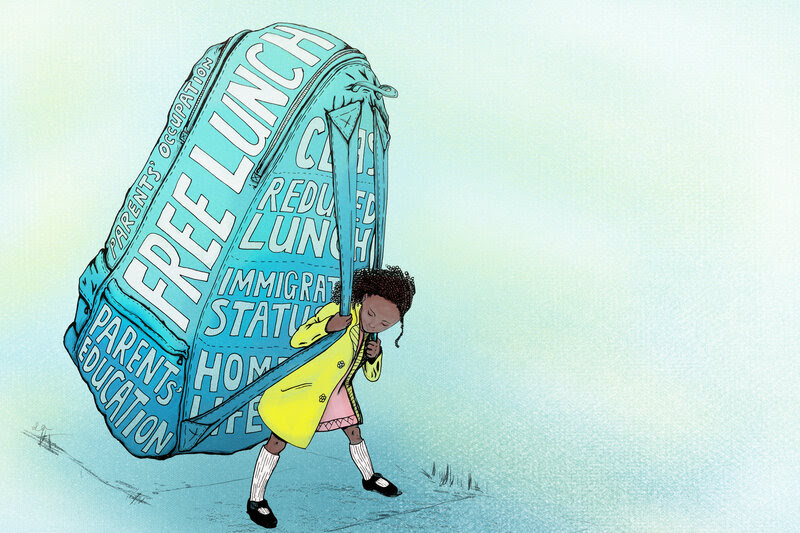 It's not necessarily out of concern about who's getting fed. Instead, it's most often used to talk about concentrations of poverty and how that effects learning.

The phrase refers to students enrolled in the National School Lunch Program — an easily available data point for any school and any district.

But is it the best yardstick for measuring children's economic circumstances? And, a bigger question: Is it a good tool for assessing a child's risk of falling through the cracks of the American education system?

A recent headline in The Washington Post highlights the confusion over using this data as proxy for poverty. The headline informed readers that, for the first time in at least 50 years, a "majority of U.S. public school students are in poverty."

But that's not exactly true. And the story itself was more nuanced. It told readers that 51 percent of students receive free and reduced-price lunch. As critics quickly pointed out, that may not be the same as "living in poverty."

The school lunch program uses as its eligibility requirement families at or below 185 percent of the federal poverty level — which calculates out to about $44,000 for a family of four.

So, sometimes this data is being used for something it's not.

"Too many people don't give it a second thought, yet it's the most important measure for the majority of work that we do," says Bruce Baker, an education researcher at Rutgers University and blogger, who tracks assumptions about demographic data.

President Harry Truman signed into law the National School Lunch Act in 1946, in part, as a way to provide meals to low-income students.

In 1966, as part of President Lyndon Johnson's "War on Poverty," the federal government began funneling extra money into school districts with high concentrations of poverty, as a way to blunt its effects.

Along the way, the federal government began using this nutrition program as a stand-in for gauging how many poor or low-income students a school has. Researchers and state education departments soon began using this "F&R" data too, says Baker.

Of course the U.S. Census Bureau measures actual poverty. But it's difficult for researchers to use that data because census tracts don't align with school district boundaries or attendance zones for individual schools.

Factoring poverty into education policy, no matter how it's done, is important. Baker says it's a strong predictor of how well children will do in school. But poverty isn't the only relevant measure. Among other key factors: education levels of parents, their occupation, and immigration status.

But absent reliable, easily obtained data on these alternatives, F&R in eduspeak serves as the de facto measure of the degree to which students are at risk — and the basis for making important decisions.

For instance, states that use accountability formulas to evaluate teachers, and sometimes to give bonuses to them, often factor into those calculations the proportion of F&R students they have.

Baker believes lunch-program data is a "blunt tool," but also that it does work on a large scale to understand a district or a school's needs.

Others are seeking a better tool.

Matthew Cohen works at the Ohio Department of Education and heads a working group looking to find alternatives. He says F&R data isn't bad at an aggregate level, but that it has some shortcomings.

First, he says, not all those who meet the poverty guidelines actually apply for the lunch program. Others who don't qualify game the system.

"When we scratch the surface, there might be trivial distortions [to the data] or there may be very important distortions," says Cohen. He hopes to release findings on potential alternatives to F&R this summer.

Here's another complication: A recent federal program allows a school to provide free lunch to all of its students even if they don't qualify. It's called the Community Eligibility Provision, and its designed to help districts reduce paperwork.

It allows schools where at least 40 percent of families qualify for food stamps or other assistance to also provide free and reduced-priced lunch for all students. For researchers, that means a school that would normally count as 70 percent F&R, now shows up as 100 percent.

Cohen won't say yet what alternatives he may offer, but getting finer-grained data isn't easy. Parents, he notes, may not want to offer additional information. And even if they're willing, school districts would need new systems for collecting and maintaining data.

The difference? As noted above, the threshold for a lower-priced lunch is 185 percent of the poverty level, while for a free lunch, it's 130 percent.

When Baker accounts for these differences, he can see that students "on the higher end of low-income" perform better than those at the lower end. Accordingly, he says it could be possible to target more specific resources to schools the more we knew about a school's at-risk population.

In the meantime, he says, people should recognize that free and reduced-price lunch is a helpful, but limited, metric. "It ain't great, but it's what we've got and it is predictive of what we want to know about student outcomes."