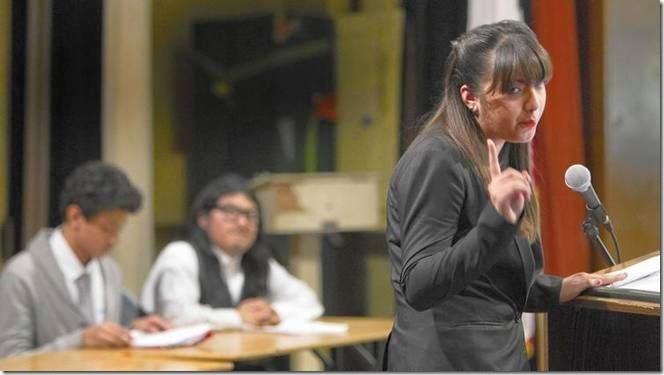 Eighth-grader Alessandra Salguero makes a point to the opposing team during a debate on homelessness at Charles Drew Middle School in South L.A. The students worked on building skills through the debate, rather than just reading books and taking exams. (Gina Ferazzi / Los Angeles Times)

For years, Charles Drew Middle School in South Los Angeles was so notorious for poor quality and unruly students that it was tagged "Drew Zoo."

But don't tell that to the 16 seventh- and eighth-graders who recently reeled off facts, fiercely presented their views and rebutted opposing arguments over homelessness and the police shooting in Ferguson, Mo. The articulate young students were participants in Drew's inaugural schoolwide debate last month, which Principal NNamdi Uzor launched to improve research, writing and public speaking skills as encouraged by national learning standards called Common Core. 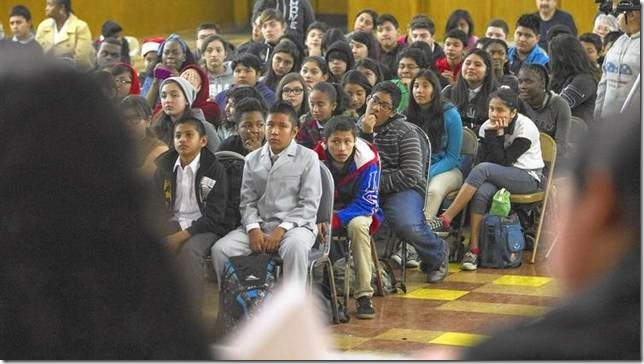 Uzor became principal in July, taking over a campus of students who are predominantly low-income and struggling academically. The school's score on the Academic Performance Index, a 1,000-point measure of campus achievement, was just 614 in 2012, among the state's lowest performance even compared with schools with similar students. In 2013, only 18% of eighth-graders tested at grade level in English on state standardized tests, while 33% were proficient in algebra.

"Over the years, scholarly achievement has not been associated with schools like ours," Uzor said. "But we are changing the culture."

The students said learning through debate was far more exciting than reading textbooks and taking multiple-choice exams. Several became so inspired that they organized a trip with parents to skid row in downtown L.A. to observe the homeless problem firsthand.

Alessandra Salguero, an eighth-grader who initiated the trip, said the students were particularly moved by the homeless children living under a bridge with their mothers. "We put ourselves in their shoes," she said. "Many of us are a paycheck away from being homeless ourselves."

Over the years, scholarly achievement has not been associated with schools like ours. But we are changing the culture. - Principal NNamdi Uzor

But she added that the students learned through the debate that they needed "real evidence and facts" to argue their positions, not just passionate opinions. Three Drew teachers, Roxanne Martin, Christine Baccus and Tunisia Haqq-Adams, worked with the students for weeks, teaching them to formulate pertinent questions, research answers, sift fact from opinion and articulately present information.

The Common Core standards are emphasizing such skills in an effort to guide students to think critically and solve problems rather than memorize and repeat facts on tests. The standards also ask students to drive more of their own learning. Uzor said the debates have cultivated all of these skills.

On debate day, the preparation paid off.

As the auditorium filled up, two teams of eight students took their places onstage for each debate and excitedly peeked into the audience, searching for their parents. They confessed to battling butterflies. Then, it was showtime.

The seventh-graders debated whether a police officer's fatal shooting of Michael Brown in Ferguson was justified, while the eighth-graders took on the question of whether homelessness is a choice and what the government should do about the problem.

In their debate, the eighth-graders spun out a dizzying array of data: 1,700 homeless people in downtown L.A. on any given night, 610,000 nationwide; more than $80 billion spent annually on food stamps, with billions on subsidized housing. 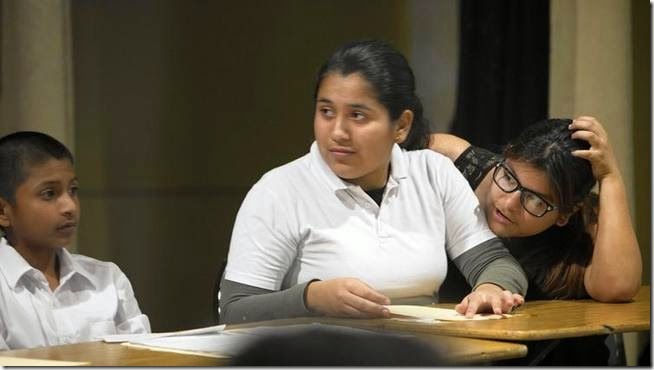 Alejandro Godoy, decked out for the occasion in a black shirt and red tie, said that services for those who don't get off their "lazy butts" to find work deprive families of a chunk of their hard-earned paychecks. Others on his team cited research that homeless people and panhandlers use much of the money they collect on the street for drugs and alcohol.

"Providing government-funded services to the homeless with no strings attached only makes it easier for them to continue their bad habits," Alejandro argued.

But Michael Lopez countered that a project to build 100,000 homes for the chronically homeless had saved taxpayers $1.3 billion to date. (That project was coordinated by the New York-based nonprofit Community Solutions.) Others on his team argued that many homeless are military veterans suffering from trauma and substance abuse who should be supported by the Americans they served.

That, however, led to a rebuttal by Darlene Garcia, who drew on her father's adage that teaching people self-sufficiency is more effective than giving them handouts. "If you give them fish, they'll eat for a day, but if you teach them to fish, they'll eat every day," she said.

In the end, Uzor declined to declare a winner, saying everyone who participated was a champion.

"This is a journey," Uzor said. "We are not close to where we want to be, but we can't be afraid to take steps."