By The L.A. Times Editorial Board | http://lat.ms/14zPOFp

January 8, 2015  ::  Charter schools must welcome all children, not just those whose parents can commit to volunteer hours

Charter schools in the Los Angeles area have enrolled their share of disadvantaged students, and for the most part those students have done well, graduating at a higher rate and with higher standardized test scores than children in traditional public schools. But not all the credit goes to the charter schools: Their students tend to have more involved parents. In many cases, the very act of enrolling in a charter school means that parents must be engaged enough to locate and compare charter campuses and sign up their children for the attendance lottery. Parent involvement is an important factor in how well students fare in school. 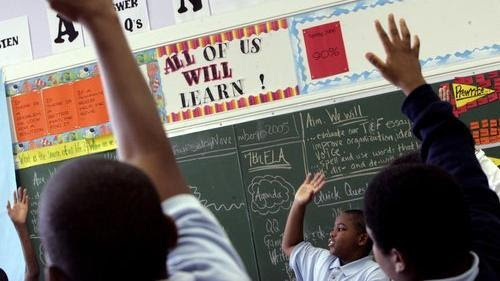 Many charter schools require parents to volunteer a certain number of hours each year, often working in classrooms or school offices or helping at campus events. (Los Angeles Times)

But many charter schools demand more than that, requiring parents to volunteer a certain number of hours each year, often working in classrooms or school offices or helping at campus events. The practice has been around for years, but only now is it being challenged. Public Advocates, a nonprofit organization that has promoted equal education for disadvantaged students, recently released a report showing that the practice is widespread.

The group found that about a third of the charter schools it surveyed in California required parents to commit to a set number of volunteer hours before admitting a child. Seventy-three of the schools are in Los Angeles County, including many of the well-known Green Dot, Alliance and KIPP schools. There were many more schools that firmly suggested volunteer time or called for keeping work logs and minimum hours, without stipulating that the work was mandated.

In many cases, charter schools may have only the best intentions in encouraging parents to be engaged. And the California Charter Schools Assn. says it doesn't know of any schools that excluded or expelled a student because of a parent's failure to work as a volunteer.

But that's not enough. The requirement itself, even if it isn't enforced, might discourage families from applying and should not be allowed. As charter schools frequently point out, they are public schools, funded with public dollars. That means they should be welcoming to all children. But not all children have parents who are able or willing to volunteer. Some have multiple jobs, child-care responsibilities and so forth. Others simply might not be interested in volunteering. Children in group foster homes have no one to volunteer on their behalf. Rules about volunteer work might leave out the children most in need, intentionally or not.

Once children are enrolled, it's fine for schools to encourage voluntarism as a way of engaging parents in their children's education. But setting discouraging rules should be prohibited. The state Board of Education should impose firm rules to stop schools from requiring unpaid parental labor; California students are guaranteed the right to a free and public education.

Public Advocates researched 555 charter schools in California and found that almost one-third of them (30%) require parents to do work at the school for a set quota of hours. This practice is illegal under the California constitution and the Education Code. In our report, we expose the extent of the practice and explain why it is illegal. We have sent a demand letter to the California Department of Education and the State Board of Education urging them to take immediate steps to abolish the practice. Below, we provide a list of all the charter schools we found that have such a practice, with a link to their policy documents.

Note: The policy statements listed here were available publicly as of Nov. 20, 2014, when this report was released. Some charter schools may have changed their policies since then and may no longer state that parent work hours are required. We plan to release an update to the report and to this web site in early 2015 to reflect those changes.

Welcome to this discussion, LA Times Editorial Board – this “recently released” report is one-week-shy of a year old!

The issue itself is complicated by the fact that charter schools by their very nature require additional parent involvement – parents elect to send their children to charters; they fill out an applications and go through an application process. Charters are schools of choice and conversely: Choice parents choose them.

Charter school parents have acquired the taste for the Kool Aid and have decided to wait for Superman!

The argument that charters don’t really enforce their requirement for voluntarism is bogus in the extreme. Of course they don’t – they know its illegal and absolutely unenforceable. However, there it is - in black+white on the application …part of the contract with parents -- like those old covenants that forbid one selling or renting property to less desirable cultures or races. It is quietly discriminatory.

It’s not a mortal sin …but it is evil.

I’m not sure what the “ask” is in the Times editorial. If it’s “The state Board of Education should impose firm rules to stop schools from requiring unpaid parental labor”, that’s balderdash! Someone with a pair needs to enforce the existing Ed Code and California Constitution!

I would like all parents to volunteer at their kids’ schools whether traditional, private, parochial or charter. There is a huge role for parents in the education of their children! And a huge need to educate parents on how they can help. I have even put it out at schools where I was a parent leader that I expected it …however I don’t want any parent to volunteer if they can’t, don’t want to  or for any other reason.

If you don’t want to, we don’t want you! Volunteering is voluntary! End of story.

What most charters do well is to welcome parent engagement and involvement. The recognize who the customer is. Thank you, come again.

LAUSD, not so much. All that chain link and those locked gates and the signs that threaten legal action if you don’t check in with the principal do not say Welcome Parents!