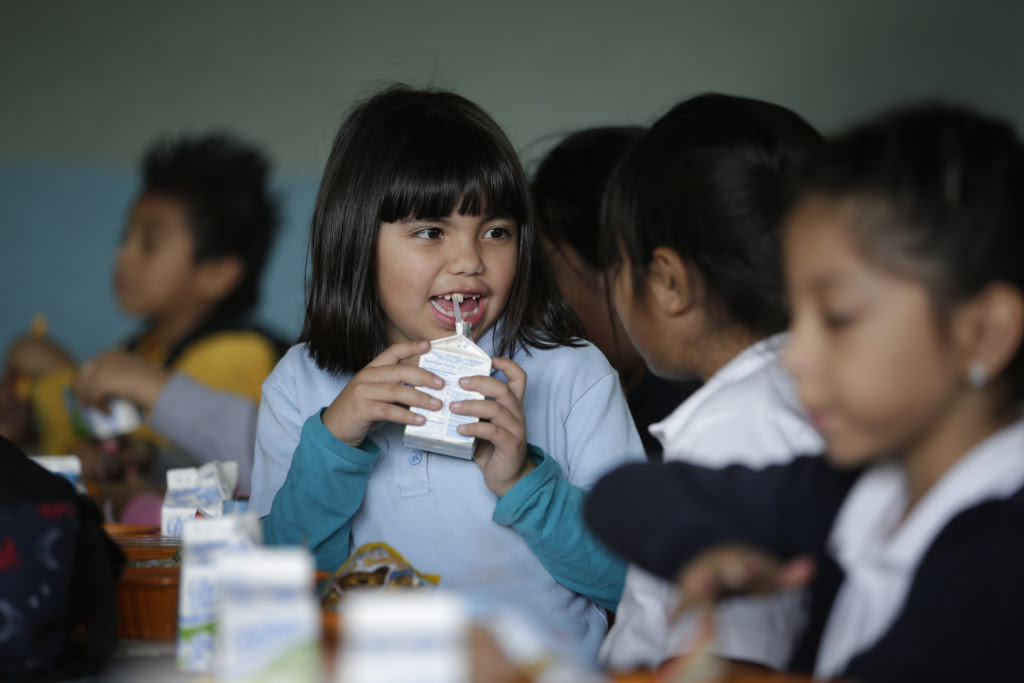 Hazel Loarca, 7, drinks her milk in the cafeteria area at Kingsley Elementary School, Tuesday, Jan. 13, 2015, in Los Angeles. Many of the students at the school in a low-income neighborhood of Los Angeles eat breakfast and lunch provided by the school. For the nearly 100 enrolled in the afterschool program, another meal is served: supper. The nation's second largest school district is doubling the number of students served dinner, with an eye toward eventually offering it at every school. Jae C. Hong/AP

January 15 2015  ::  Many of the students at Kingsley Elementary School in a low-income neighborhood of Los Angeles eat breakfast and lunch provided by the school. For the nearly 100 enrolled in the after-school program, another meal is served: supper.

"When kids are hungry, they don't pay attention," said Bennett Kayser, a member of the Los Angeles Unified School District board, which was announcing the expansion Thursday. "This is something that should have started years ago."

Thirteen states and the District of Columbia began offering students dinner as part of a pilot program expanded to all states after the 2010 passage of the Healthy, Hunger-Free Kids Act. Schools where at least half the students are low-income and qualify for free or reduced-price lunch are reimbursed for each supper by the U.S. Department of Agriculture, at a rate often significantly higher than the cost of the meal.

In the 2014 fiscal year, 104 million suppers were served to students, up from about 19 million in 2009. Participation is still lower than in the nation's long-running breakfast and lunch programs, which serve more than 12 million and 31 million students, respectively.

The introduction of dinner to school routines is unique in that it could take the place of what many consider a near-sacred ritual: The family dinner.

Proponents say that since many students stay on campus until the early evening hours, it makes sense to provide an additional meal. In the case of the neediest students, they might not get anything to eat after class other than what is offered at school.

Research on family dinners has shown a plethora of benefits: Greater academic achievement, less delinquency, and better family relations. Yet the research also presents a chicken-and-egg type question: Do children reap those benefits because they have dinner with their families, or do the same families that have dinner together display other traits that account for higher achievement?

More recent research indicates while family dinners can be linked to fewer symptoms of depression, most of the other benefits seem to decrease when demographic and other environmental factors are taken into account. At a time when many families have hectic schedules, dinner at school could provide some relief, said Rachel Dunifon, a policy professor at Cornell University.

"If these meals help alleviate stress, it could actually be good and open up more time for families," she said.

LAUSD currently serves supper to 75,000 students and plans to expand the program to about 150,000 over the next two years. School officials estimate it will generate $16.6 million in revenue, which will go toward expanding the program.

At Kingsley Elementary School, several students said the roasted sunflower seeds, cheese sticks and, depending on the day, sandwiches, salads and chicken they are served function more like a snack than a meal. Some eat another meal at home.

But for others, it's one of the few things they eat after class. Ten-year-old Evelyn Ruballos said she usually only eats crackers when she gets home.

"And then I just go to sleep," she said.