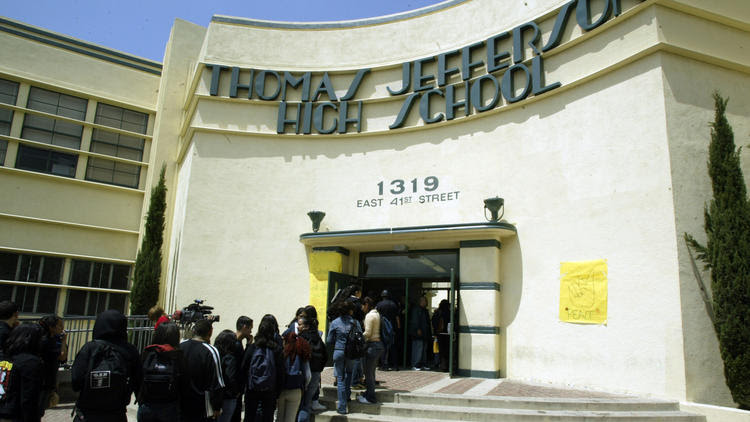 Jefferson High School, shown in 2005, on Monday was the site of a student sit-in staged to protest issues with class schedules and other problems at the South Los Angeles campus. (Annie Wells / Los Angeles Times)

The Alameda County Superior Court judge is expected to make a decision Monday.

The request stems from a lawsuit brought earlier this year that alleges the state has ignored its obligation to ensure that all California students receive a minimum level of instruction. Attorneys say the state is primarily abandoning its responsibility to students who are minorities and from low-income families.

Each day that they're sitting in a content-free course or being sent home they are falling farther behind. - Public Counsel attorney Kathryn Eidmann

The lawsuit, filed by the American Civil Liberties Union, Public Counsel and others, contends the lack of quality learning time for these students is in violation of the state Constitution's equal protection guarantee because the state does not ensure that all students have access to an adequate education.

Last month, hundreds of students at Jefferson walked out of class to protest the scheduling snafu and what they contended was inept management by administrators that had severely interrupted their education.

Some students have been assigned classes they do not need or have already passed, others have multiple free periods, or are given administrative tasks rather than courses with instruction, according to the lawsuit. Others are simply sent home. Some classes have up to 50 students, the lawsuit said.

Public Counsel attorney Kathryn Eidmann said she was optimistic that the judge would force the state into action.

"These are students who have been incredibly resilient and care deeply about their future and education," she said. "Each day that they're sitting in a content-free course or being sent home they are falling farther behind."

L.A. schools Supt. John Deasy, who oversees Jefferson High, supported the lawsuit in a letter to the court. He wrote that the practice of enrolling students in non-instructional classes is "indefensible."

"These courses serve no conceivable pedagogical purpose and defy every norm and standard adhered to by professional educators," Deasy wrote. "The fact that these courses are used anywhere is antithetical to education, but the fact that they are being assigned to students who are academically behind and have not fulfilled graduation and college entry requirements is outrageous."

Jefferson High Principal Donald Foote could not be reached for comment. An assistant principal declined to comment.

Senior Jason Magana, 16, a plaintiff in the case, was initially enrolled in a graphic design class he had previously taken and passed, but lacked economics or government classes — which are requirements for graduation. After missing four weeks, he was placed in an economics class.

Magana is now enrolled in eight classes, two of which are "home" periods — free time without instruction — allowing him to leave school at 11:20 a.m. two days a week.

about not being prepared for college," he said, adding that he encouraged his younger sister to attend a different high school.

The attorneys have asked the judge to force the state to ensure that no student at Jefferson who is not on track to fulfill requirements to enter college be assigned to any class that lacks instruction; that no student be assigned more than one of these classes; that no student be enrolled in a class in which they've already received a passing grade; that all students are assigned to classes that provide a desk and chair for each student; that all students be allowed enrollment in classes needed to qualify for college; that the entire teaching staff adhere to the judge's directives; and that students be given instruction time to make up for the time already lost.

Cruz vs. California was initially filed on behalf of students from seven schools, including campuses in the Los Angeles and Compton school districts; Jefferson was added to that group.

Plaintiffs' attorneys say the lawsuit aims to protect students' rights as the state fails to address a wide disparity in educational opportunity.

The class-action suit asserts that the state is aware of but fails to act to bridge the gap in instruction time as students fall behind, drop out or advance unprepared for the rigors of college because they are not provided as much learning time as their peers elsewhere.

The complaint contends that students at these schools lose days, weeks and months of classroom instruction over the course of their education careers as a result of chaotic campuses that lack resources and stability.

Among the suggested causes: unstable and transient staffing of teachers, counselors and administrators; a lack of course offerings that can lead students to be assigned to free periods or administrative tasks rather than courses with instruction; the frequent interruption of class by violence or security issues; chronic student absenteeism; and a lack of mental-health professionals.

The litigation calls on the state to establish a system of tracking the days and minutes of instruction that accounts for time lost, rather than relying solely on the academic calendar. When a school falls short, the state should intervene to correct and prevent further lost time, according to the lawsuit.

“L.A. schools Supt. John Deasy, who oversees Jefferson High, supported the lawsuit in a letter to the court. He wrote that the practice of enrolling students in non-instructional classes is "indefensible."

"These courses serve no conceivable pedagogical purpose and defy every norm and standard adhered to by professional educators," Deasy wrote. "The fact that these courses are used anywhere is antithetical to education, but the fact that they are being assigned to students who are academically behind and have not fulfilled graduation and college entry requirements is outrageous."

I’m sorry. John Deasy is the superintendent of LAUSD. He has the power under NCLB to “transform” Jefferson High School. And he has.! He has installed his hand picked principal and staff.

And it obviously hasn’t worked. In what world is he not accountable?

Instead he wrote a letter to the court supporting the lawsuit. In what world is he not accountable?