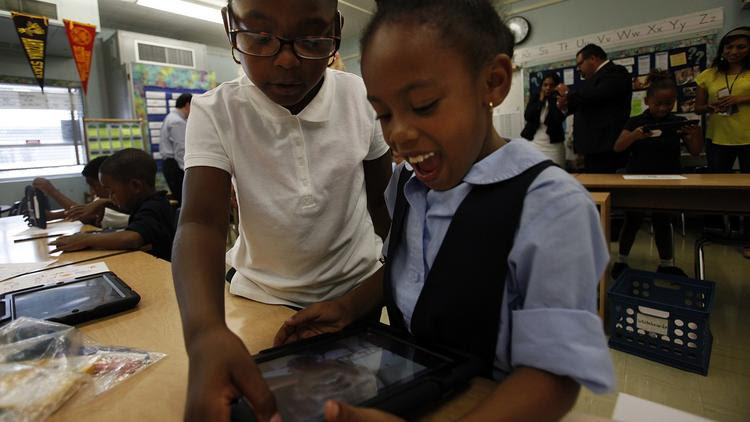 Oct 25, 2014  ::  Los Angeles Unified students could take school-issued iPads home as soon as next month under a new plan that officials say has dealt with security concerns.

The issue of when — or if — to allow the devices to be taken home has been much debated, but it was part of a $1.3-billion plan to provide a computer to every student in the nation's second-largest school system.

Last year, students took iPads off campus, and administrators hastily reversed course after high schoolers deleted security filters to freely surf the Internet. Devices were then collected, and some students had limited use of them for the rest of the year.

Now L.A. Unified is confident it can distribute the devices effectively and securely.

"The district has worked diligently to revise its policies and procedures," a team of senior administrators wrote in an internal memo that was provided to The Times on Friday.

The memo is dated Oct. 8 and addressed to the Board of Education and Supt. John Deasy. Deasy, who has since resigned, had come under critical scrutiny for his handling of technology efforts. His replacement, Ramon C. Cortines, indicated this week that the district needed to press on.

"We are committed to providing technology to our children — whether it be desktop computers, laptops or tablets — to help prepare students for the world they are living in," Cortines said in a statement.

(Cortines was less sure about how to pay for curriculum on the computers, saying he didn't want to use construction bond funds.)

Only 58 schools have iPads for all students, a much lower number than anticipated when the rollout began just over a year ago. The pace was slowed by the Board of Education because of technical, policy and political issues. Going forward, other computers will be tried out as well.

One persisting issue was whether iPads paid for with school-construction bonds could leave campus. A year ago, in-house attorneys asserted the devices could be, comparing them to bond-funded school buses and library books.

Under the new plan, principals will decide whether to allow students to take the devices off campus.

Either way, schools are required to teach students about "digital citizenship," which covers topics including using the Internet appropriately, handling the devices properly and refraining from cyber-bullying.

"Some students will find a way around even the most robust Web filtering system," according to the memo. "Thus, a comprehensive digital citizenship program is essential to helping students act responsibly online."

The goal is to enhance learning at home, but no homework assignments can require use of the Internet because not all students have access.

Parents also have to provide written consent for students to take home the $768 devices. If they are damaged, families could be financially responsible.

For the sake of their safety, students will be advised not to resist anyone who tries to forcibly take a device. Officials said they are confident that they have the tools to disable a device remotely, so that it would be of little use to a thief.