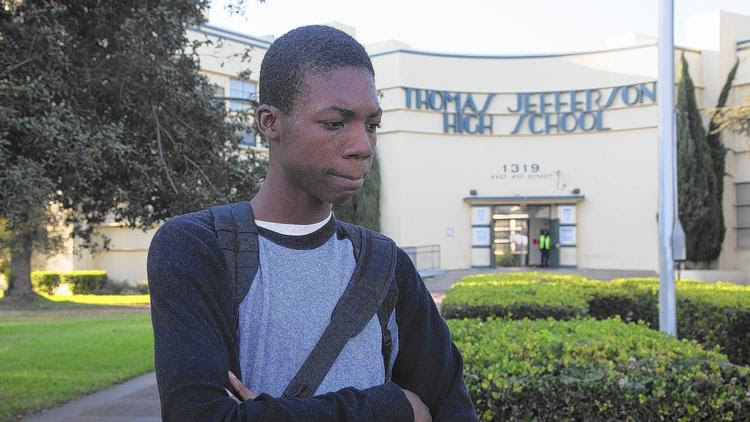 Armani Richards, 17, a senior at Jefferson High School, is one of hundreds of students who could not get into the classes they need due to a malfunctioning computer system. A judge has ruled the state must intervene to fix the scheduling issues. (Gina Ferazzi / Los Angeles Times)

Oct. 8, 2014 | 9:50 PM  ::  For weeks, Armani Richards sat in the Jefferson High School auditorium waiting to be assigned classes for his senior year. The student body president wanted to enroll in subjects that would help him pursue a career in chemistry or computer science.

But a malfunctioning computer records system meant that Richards and hundreds of other students weren't getting the classes they needed. Some were sent to overbooked classrooms or were given the same course multiple times a day. Others were assigned to "service" periods where they did nothing at all. Still others were sent home.

"Everything had gone so wrong," Richards, 17, said.

On Wednesday, a Superior Court judge ordered state education officials to fix the problem at Jefferson High immediately, ruling that students were being deprived of their right to an education.

Alameda County Judge George Hernandez Jr. ruled that students "have suffered and continue to suffer severe and pervasive educational deprivations" as the "direct result of Jefferson's failure to provide the students with appropriate course schedules."

The scheduling blunders affected honors students as well as those behind in credits and at risk of not graduating. Problems at the school continue even though the academic year began nearly two months ago, according to sworn declarations reviewed by the court.

Student schedules must be corrected and additional instructional time provided as necessary, Hernandez wrote in his 14-page decision. He said the state must ensure that "there are adequate teachers, classrooms, seats, desks and instructional materials and any other resources needed."

The state also must determine whether the Los Angeles Unified School District has the resources to correct the problems. If it doesn't, he said, the state must fill in any gaps "financial or otherwise."

The ruling was a rebuke both to L.A. Unified — for mishandling the situation at Jefferson — and the state, for its unwillingness to get involved.

L.A. schools Supt. John Deasy had offered a declaration in support of Jefferson students last week and, on Wednesday, hailed the ruling.

"This is another victory for youth in challenging circumstances," he said in a statement. "We look forward to meeting state officials to explain the new resources needed."

The judge, however, did not spare Deasy or the Board of Education from criticism.

What this judge is saying is that the state of California -- and its education officials -- cannot turn its back on the students of Jefferson.... - Mark Rosenbaum, Public Counsel director

"Jefferson's scheduling issues and the resulting chaos have been widely publicized and communicated," the judge wrote. Despite the public attention, he said, "scheduling problems still persist and, more importantly, there is no evidence of any organized effort to help those students who have been assigned to courses several weeks into the semester to catch up to their peers."

The judge also chided Deasy, saying "he does not admit to knowing" about Jefferson's scheduling problems "or describe any actual or anticipated efforts by LAUSD to remedy them."

Deasy initially downplayed difficulties with the new records system across the district, but then assigned a team of senior administrators to address them. He did not recount these measures in his declaration to the court.

The judge's order applied to the state because L.A. Unified is not party to the lawsuit, which was filed in Alameda County. The underlying litigation is about whether the state should end or limit non-academic course work that hinders students from achieving their academic goals.

"What this judge is saying is that the state of California — and its education officials — cannot turn its back on the students of Jefferson by forcing them to enroll in sham courses and calling that an education," said Mark Rosenbaum, director of Public Counsel, which pursued the case along with the ACLU Foundation of Southern California and the firm Carlton Fields Jorden Burt.

State education officials had argued in court that course schedules and content were a local matter over which the state should not exercise authority. But a top official said the state would comply with the order.

"The department believes strongly that every child should have the classes he or she needs to graduate from high school," said state Chief Deputy Supt. Richard Zeiger. "This is a position I know we share with Los Angeles school officials."

Jefferson was not originally named in the lawsuit, although two other L.A. Unified schools had been cited. Attorneys added Jefferson and Dorsey High after problems exploded with the start-up of the new districtwide student records system.

School district board member Steve Zimmer said he saw the court order as an opportunity to work with the state to resolve "a serious problem."

Some board members were bothered that Deasy chose to participate in the litigation without first discussing it with them. The board is scheduled to conduct Deasy's annual performance evaluation on Oct. 21, and for weeks there's been speculation that the superintendent may quit or be forced out.

Monica Ratliff, another board member, said she was disappointed in Deasy's lack of leadership on the matter. "I find it hard to fathom that our superintendent would know of these issues and need a court order to fix them," she said.

The judge ordered the state to meet with Deasy right away, but that may not be possible. Deasy was scheduled to leave early Thursday for a long-planned trip to South Korea. Deasy said he would be representing L.A. Unified, visiting schools and meeting with government officials.