L.A. SCHOOL BOARD AUTHORIZES TALKS ON DEPARTURE AGREEMENT WITH DEASY

L.A. school board authorizes its attorneys to discuss a possible departure agreement with Supt. John Deasy 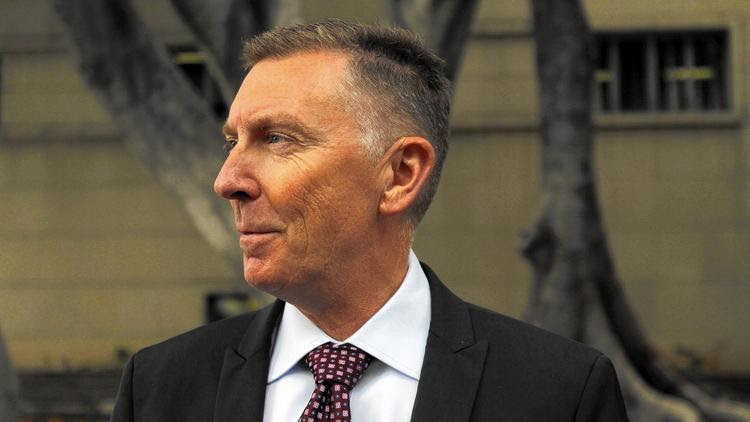 John Deasy, the superintendent of the Los Angeles Unified School District, was the focus Tuesday of discussion by the board of trustees. (Francine Orr / Los Angeles Times)

Oct1 1, 9:45 pm  :: The Los Angeles Board of Education has authorized its attorneys to discuss terms of a possible departure agreement with schools Supt. John Deasy, The Times has learned.

The move was made in a specially called closed session Tuesday, but it was not disclosed publicly. No decision was reached on whether an offer would include a buyout, according to several people close to the situation. They declined to be named because they were not authorized to speak about the matter. Members of the board agreed to keep the issue confidential.

The board's action stops short of signaling the end of the Deasy superintendency, but it's a step in that direction. The overture was described by sources as "amicable," suggesting that acrimony could be avoided or explicitly forbidden as part of a separation agreement.

Deasy's contract calls for an annual evaluation before the end of the month. He became superintendent in April 2011, and his current term runs through June 2016. A favorable evaluation would result in an automatic one-year extension. The pact also provides for termination at any time with 30 days' notice.

Deasy, 53, has become a polarizing figure in L.A. Unified, the nation's second-largest school system. His supporters credit his leadership for gains in test scores, graduation rates and improved results for students learning English. They also applaud his push for more rigorous evaluations of teachers and principals, for reducing the number of student suspensions and for providing breakfast to students in the classroom.

His detractors focus on such issues as problems with the rollout of a $1.3-billion effort to provide computers to every student, teacher and campus administrator. Another technology project, a new student records system, malfunctioned this fall. More broadly, critics fault Deasy for what they call an autocratic, punitive leadership style that they say has demoralized teachers and other employees.

Deasy has enjoyed strong support from key civic and business leaders, who urged the Board of Education this week to retain him.

The superintendent has not fared so well with the board itself — it hasn't helped that a majority of its members won their elections despite efforts by Deasy's allies to defeat them. Board members also complain that Deasy pays little heed to their input.

Deasy has expressed reservations in recent weeks about his ability to remain effective in the job. But he hasn't said he will quit, and the seven-member board hasn't said it would fire him.

Despite Tuesday's action, it's not clear that a majority would be willing to dismiss him. But there appear to be four or five votes favoring a separation agreement without a buyout. There also are two strong Deasy supporters on the board. They too could back a settlement — if they thought it was fair to Deasy and if that's what Deasy wanted.

One or more members would probably oppose a cash payment to Deasy, according to those with knowledge of the frequently heated discussion, which lasted four hours. Part of the meeting involved planning for Deasy's pending evaluation, those people said. The board also discussed the implications of possibly losing support from some civic leaders and organizations in the event of Deasy's departure.

His contract, which pays $350,000 a year, was revised last year and dropped previous goals related to student achievement because test scores are not yet available from new state exams.

He also was expected to increase revenue and enrollment.

District revenues have gone up sharply, but that was the result of an improved statewide funding program. Enrollment has trended downward in recent years.

At the end of Tuesday's meeting, the board reported that it had taken no action that needed to be disclosed, even though board votes typically must be reported.

David Holmquist, the district's general counsel, said he could not discuss anything that happened in closed session. He declined to confirm any action taken in connection with the superintendent. But he did say that state law allows the board to provide guidance in confidential negotiations without disclosing the vote to the public.

Another topic of the board discussion, sources said, was Deasy's possible interim replacement.

In a letter to board President Richard Vladovic dated Tuesday, Deputy Supt. Michelle King offered to step in, if needed.

Her brief letter noted that the board "may be considering a leadership change."

"Should this be the case, I respectfully request consideration to serve as Interim Superintendent," she wrote.

The letter is marked "confidential" and was written on L.A. Unified stationery. King could not be reached for comment Wednesday.

King achieved a solid reputation as principal at Hamilton High, then rose gradually through the ranks. As a senior official she has maintained a low profile; she's been regarded as a loyal lieutenant to Deasy.