smf: ‘Proposes’ being the operative verb, not ‘eliminate’ 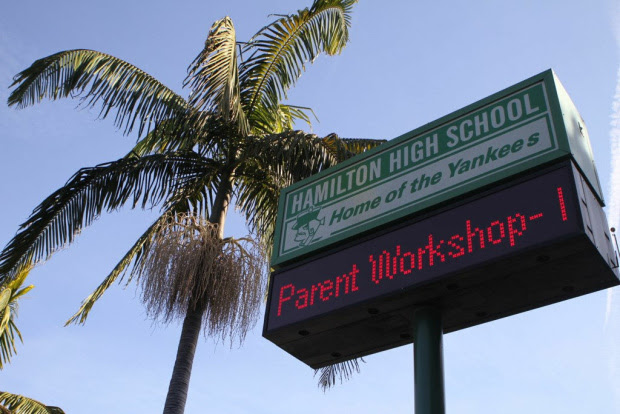 April 18, 2012 |News spread fast Wednesday that the Los Angeles Unified School District was planning on lowering their standards and would soon allow Ds to be passing grades.

Among other outlets, somehow the Los Angeles Times had gotten its facts wrong. While describing how high schoolers were being required to take college prep classes, the paper erred in saying that district officials were "offering details of a proposal to reduce overall graduation requirements and allow students to pass those classes with a D grade."

Not only did this allow Matt Drudge of the powerful Drudge Report to write an eyebrow-raising headline and tweet ("LA Schools May Lower Graduation Standards To Curb Dropouts"), but it inspired the LA Times' beloved columnist Steve Lopez to blast an angry blog mini-column on LA Now.

"Could you send a worse message to kids than to tell them D's are just fine?" Lopez asked rhetorically in his post "Plans to make Ds a passing grade deserve an F."

Lopez continued, "Yeah, I understand the goal is to keep kids from flunking or dropping out, but telling students you don’t really expect much of them could end up being just as corrosive."

But the strange thing is, Ds are already passing grades at LAUSD. The proposal the district wants to enact in 5 years is to raise the bar not lower it, Stephanie Abrams, the LAUSD Social Media Director, told KPCC on Wednesday.

"The proposals include raising the passing grade from a 'D' to a 'C' in 2017," Abrams explained on Facebook, "because the UC system doesn't recognize 'Ds' as passing."

Abrams had a busy day on Twitter explaining to the outraged and misinformed.

"Nope, we're RAISING standards," she tweeted to Drudge and others who expressed concern.

The only other major proposals the district is suggesting is to: end the current requirement for health and technology classes, ensure that students successfully pass two foreign language classes to graduate, and they must also pass three years of math to get their diploma.

"They will no longer have to pass those [tech and health classes]," Abrams told KPCC, explaining that technology classes include learning Powerpoint, Excel, and carpentry, among others. "[Students] can focus on their core curriculum. But if you're failing math, focus on that."