Some see John Deasy as a dynamic leader morally driven to give all students a quality education. Others see a relentless taskmaster intolerant of dissent. He admits impatience but otherwise has no apologies.

April 8, 2012  ::  It's 7:30 a.m. and the chief of the Los Angeles Unified School District briskly launches a powwow on the sensitive topic of how to place the strongest math teachers with the weakest students.

Supt. John Deasy leads two dozen administrators through statistics showing the schools where the district's most effective algebra instructors teach. They brainstorm incentives to get principals and teachers to buy into the plan, aimed at raising abysmal scores on state math tests. Some may believe it a waste to put their best with the worst, one administrator cautions, but Deasy's response is quick and characteristically blunt:

"You really shouldn't teach in LAUSD if you believe that," he says.

He pledges to act on the issue, asks the administrators for similar commitments and reminds them of their pace: "as many things as fast as possible." He adjourns at 9:29 a.m. — one minute early. Then on to the rest of his 20-hour day.

Nearly a year after Deasy, 51, took over as head of the nation's second-largest school district, it is too soon to judge him on his own performance targets — boosting student test scores, for instance.

But Deasy is pushing to change the culture of a behemoth school system with 660,000 students on 743 campuses across 710 square miles of urban sprawl. Some see Deasy as a dynamic leader driven by a moral urgency to give all students a quality education. But others view him as a relentless taskmaster intolerant of dissent.

"Either you do what he wants or you're gone," said one senior administrator who, like most senior aides and top administrators contacted, asked for anonymity for fear of reprisals.

Antonia Hernandez, president of the California Community Foundation, is one of many civic leaders who believes Deasy should press harder to improve a district where just over half the students graduate on time and half are not proficient in reading and math.

"We all know what LAUSD has been doing in the past hasn't worked," she said. "He needs to be even more aggressive. People are hungry for leadership."

Deasy admits he can be impatient and undiplomatic but otherwise makes no apologies for his style. He says he wants to find common ground with teachers and administrators; consensus is his preference rather than his priority.

"This place has been paralyzed by a culture of fear to do anything independent in leadership," Deasy said. Now, he said, "we get things done."

The wiry superintendent, a Massachusetts native who married his high school sweetheart and has three grown children, arrives at his office by 4:30 a.m. and still manages to squeeze in a three-mile run. In a recent interview, he ticked off his team's proudest accomplishments so far:

A new contract with the teachers union allowing more decision-making at the campus level. A program to evaluate principals and teachers using student test scores and other yardsticks. The enhanced use of data to manage and measure performance. The settlement of a class-action lawsuit to protect struggling schools from devastating layoffs. A more discerning tenure process. New efforts to raise money. More healthful school menus.

To get results, Deasy eschews the endless deliberation characteristic of academia and acts with startling speed. The clearest example was his quick decision to replace the entire staff at Miramonte Elementary School after a current and a former teacher there were arrested on suspicion of lewd conduct.

His conference room prominently displays color-coded charts tracking progress toward his five key goals — some of which have never been achieved anywhere: 100% graduation and attendance, academic proficiency for all students, more parent engagement and improved school safety.

The increasing focus on data has helped transform the process for granting tenure. In the past, nearly every teacher earned that permanent status. But in the Deasy regime, teachers are more closely scrutinized for their classroom management, ability to raise test scores, adherence to lesson plans and other factors. In the last year, fewer than half of eligible teachers achieved tenure, Deasy said. Those who didn't lost their jobs.

Deasy and his team have also used data to tackle issues that community activists say have long been ignored: Why, for example, are black and Latino boys disproportionately suspended from school and how does that affect their dropout rates? The district now monitors and reports disciplinary actions against students by race and poverty every month; since then, he said, suspension and expulsion rates have dropped markedly.

Deasy's actions have been widely hailed by local leaders from such diverse organizations as the Chamber of Commerce, the United Way, the Urban League and InnerCity Struggle, an Eastside community group.

"He has focused attention on things we've been screaming about for years and is moving policy around it," said Marqueece Harris-Dawson of the Community Coalition in South L.A.

Enrique Legaspi, a history teacher at Hollenbeck Middle School in Boyle Heights, respects Deasy for innovation — citing a college prep program being planned for the Eastside — and for taking a closer look at ineffective teachers.

But Deasy attracts a striking degree of criticism from within the ranks.

Anxiety is widespread among many over the superintendent's policies, most notably his push for tougher evaluations using students' test scores as one measure. Many teachers, and their union leadership, regard that as unreliable. Some observers worry that Deasy's expectations for ever-improving performance come amid historic budget cuts that have increased class sizes and slashed support programs; the superintendent said he worries about that too.

Some critics also fault Deasy for what they characterize as impulsiveness and an off-putting temper.

At Washington Prep High School last fall, Deasy dropped unannounced into a senior composition class taught by substitute teacher Patrena Shankling. Deasy angrily criticized Shankling for carrying out the assignment left by the regular teacher, calling it busywork that disrespected students. Shankling asked him to leave and Deasy allegedly retorted, "You're the one that will be leaving," before storming out, according to written statements from Shankling and students.

In a letter dated the following day, the school district fired Shankling, who was a well-regarded substitute at the school.

Shankling, who has filed a grievance against the district, declined to be interviewed. Deasy said he does not comment on grievances, but "all disrespect to a student will be addressed immediately if I see it."

Lisa Karahalios, a history teacher at Verdugo Hills High School, became disillusioned with Deasy after he vetoed the choice of teachers, parents and staff for a principal despite earlier pledges to the contrary. "A lot of teachers feel he's disconnected from what's happening in the classroom," she said.

Deasy said he used his rightful administrative authority to choose a stronger leader for the school.

Teachers were also angry over his decision to replace the Miramonte faculty.

"Those people are tarred forever, and it's on Deasy's head," Perez said.

Deasy said he came up with the staff removal idea a few days after the allegations surfaced amid the specter of disruptive investigations and safety concerns. He discussed the logistics with senior staff in two days of marathon meetings. By the end, he said, agreement on the plan was "near universal." But among the senior staff members, there was widespread but unvoiced disagreement, according to several of them.

Deasy called his decision "necessary and right" and praised his staff for its "unbelievable effort."

Since then, Deasy has moved swiftly — too swiftly in the view of some — to remove or fire teachers accused of misconduct.

The superintendent also took issue with perceptions that he is autocratic. He said he constantly invites feedback, widely consults with school chiefs in New York, Boston, Chicago and elsewhere and meets regularly with his executive coach, Kevin Sharer, who heads the biotech giantAmgen Inc.

Deasy said he is firm on his goals but flexible on how to reach them: He changed his mind, he said, when staff argued that he couldn't roll out the new pilot evaluation program as quickly as he wanted.

"The sign of a good team is healthy disagreement," he said.

But he told senior staff they should resign rather than dissent from the round of controversial budget cuts. Deasy said he felt the stakes for students were too high to "fracture the team."

Up next, Deasy said, is preparing schools for new national curriculum standards. More training of teachers and administrators. Installing the evaluation system across the district. An honest reckoning with chronically underperforming schools.

But first he needs to get through this day. He begins before dawn, scanning an overnight police report. He powers through staff meetings on litigation, algebra, media strategies, performance management. He meets with the United Way, the Chamber of Commerce and former state Supt. of Public Instruction Jack O'Connell, takes a call from the governor, attends a League of Women Voters' evening event. After that, a dinner meeting, then home to check email and prepare for the following day's work. He turns in at 11:15 and will rise four hours later.

His favorite part of the day is school visits. At Liechty Middle School west of downtown, he shakes hands with staff, asks the principal to show him a strong and a weak teacher, visits their classrooms and asks math students to explain their work.

At Esperanza Elementary in the Westlake district, he sees students eating turkey burgers and watches English immersion classes. He praises kindergartners for lining up nicely and compliments a girl on her sparkly pink shoes. "There's an absolute climate of healthiness," he says with a satisfied smile.

Politics have made his job more complicated. A shift on the Board of Education, with the departure of Yolie Flores and addition of Bennett Kayser, has resulted in "less unanimity" about the district's direction, he said. Last fall, some board members discussed replacing Deasy, but the talk never achieved critical mass.

Deasy figures he has to show results fast to demonstrate that both he and L.A. Unified can do the job. He also believes it will take eight focused years to make a permanent mark, a far longer tenure than any recent superintendent.

But Deasy doesn't dwell on all that.

"It makes no difference how long I stay; it makes a difference whether kids graduate college- and career-ready," he said. "It's the mission, not the man. Big time." 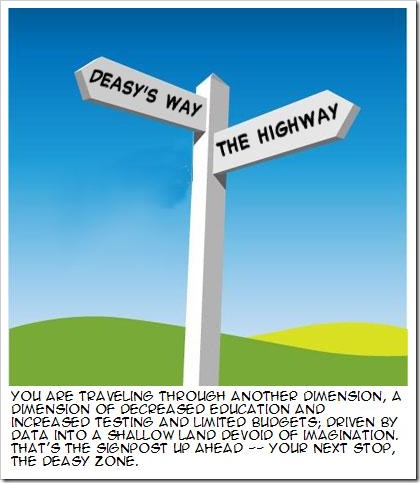