Friday, April 27, 2012  ::  In the United Kingdom, inspectors have been visiting and evaluating schools for about 150 years, and the British government has required standardized inspections of all schools since 1992.

In the United States, schools are evaluated largely by student performance on standardized tests that are scored by computers. Critics say the emphasis on test scores and the adequate yearly progress formula used during evaluations aren’t flexible enough to diagnose individual schools’ strengths and weaknesses.

Jerald authored “On Her Majesty's School Inspection Service,” a report examining the rigor of school inspections in England, a system that aims to give parents better information about schools and hold schools accountable for performance.

When British inspectors, who report directly to Parliament and provide their 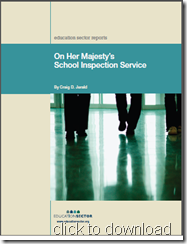 findings “without fear or favor,” identify a school needing improvement, they generate a letter to school administrators detailing strengths and weaknesses in key areas like leadership and classroom teaching, along with a list of high-priority recommendations for resolving problems. After changes are implemented, the school’s performance usually improves, often in less than two years.

Change often comes more slowly to American schools than it does to English schools.

Jerald, who argues American education policymakers should consider on-site inspections more closely, will discuss the benefits of school inspections and explore major policy decisions when such systems are designed.

Seminar topics include school evaluation methods that use a broader range of evidence than that provided solely by test scores and formulas, how schools can leverage expert judgment rather than relying only on mathematical formulas, and how to give schools better diagnostic feedback to support continuous improvement.

A key difference between school reviews in England and the United States is that U.S. schools are held accountable primarily through test scores and other quantifiable data, whereas in England, test scores are supplemented by observational data inspectors gather.

“In an inspection system,” Jerald wrote in his report, “trained professionals weigh the evidence for judging a school rather than simply plugging it into a weighted formula.”

With its emphasis on test scores, Jerald said the American evaluation system can fail to account for factors like teacher quality, school leadership, and student behavior and discipline.

“In a way,” he said, “with our dependence on numbers, the U.S. has ceded accountability measures to computers.”

While centralization worked for England’s school inspections, Jerald acknowledges a call to centralize a government service likely would be “a hard pill to swallow” in America’s current political climate. Still, he believes a thorough and rigorous school inspection system could find a place in the United States.

“There is a tremendous polarization among educators about school accountability,” he said. “Some people are tired of all of the test-based accountability measures and want to get rid of it entirely. The other side still favors testing of some sort.”

Despite these disparate viewpoints about how schools should be evaluated, Jerald said educators generally agree about the necessity of school accountability measures.

“Once you point out accountability will continue under this system, inspections can start to become pretty attractive,” he said.

Policy Analysis for California Education is an independent, non-partisan research center based at the University of California – Berkeley, the University of Southern California, and Stanford University that seeks to define and sustain a long-term strategy for comprehensive policy reform and continuous improvement in performance at all levels of California’s education system, from early childhood to post-secondary education and training.