THE FAILURE OF ONE LAPTOP PER CHILD 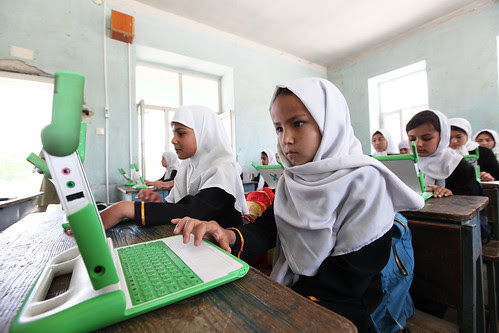 The tenor of these stories feels like a grand "Gotcha!" for ed-tech: It's shiny stuff, sure, but it offers no measurable gains in "student achievement." So while the OLPC project might have been a good idea, so the story goes, it is not a good investment.

One Laptop Per Child was a good idea, a noble and ambitious one at that. Originally proposed in 2006, OLPC aimed to build an inexpensive laptop that would be sold to governments in the developing world and made available in turn to the children in those countries via their respective ministries of education. Easier said than done. Over the course of the past 6 years, the OLPC has fussed with hardware and software specs, finally building a laptop (and now, a tablet) that costs $200 (twice that of the originally promised price).

In the meantime, much of the developing world has experienced its own mobile computing revolution. There are now a number of manufacturers working on low-cost devices for that market. There's the Intel Classmates PC, for example (with similar hardware, but more expensive software than its OLPC coursin); there's the Worldreader project (it delivers villages a library full of e-books via Kindles); and there's the now-infamous Aakash tablet (which was sold in India for $35 but with its reliability and functionality very much in question).

Arguably more significant than the competition OLPC faces from these low-cost tablets and netbooks: 95% of the world's population now owns a cellphone, by some estimates (See Wikipedia's list of mobile phone penetration, broken down by country). Of course, a clamshell phone is hardly the same as a laptop. One has SMS; the other, a command line. Nonetheless, the ubiquity of the cellphone makes it clear that the value proposition of the OLPC device needs to be more than just "access" and "connectivity." 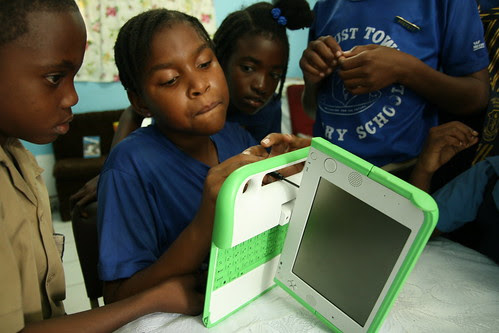 The mission of the non-profit organization always stressed something broader, bigger -- One Laptop per Child meant empowerment, engagement, and education:

We aim to provide each child with a rugged, low-cost, low-power, connected laptop. To this end, we have designed hardware, content and software for collaborative, joyful, and self-empowered learning. With access to this type of tool, children are engaged in their own education, and learn, share, and create together. They become connected to each other, to the world and to a brighter future.

No mention of improving standardized test scores in there, you'll notice. No talk of "student achievement." "The best preparation for children," according to the OLPC website isn't test prep. It is "to develop the passion for learning and the ability to learn how to learn."

Standardized test scores in math and in language do not reflect "the ability to learn how to learn" -- they don't even purport to. But we fixate on test scores nevertheless. It is worth noting here that the study that prompted today's headlines about OLPC's "disappointing" test results -- one conducted by the Inter-American Development Bank using data collected from some 300 primary schools in rural Peru -- did find some improvement in students' cognitive skills (as in, "the ability to learn how to learn").

The study points out other things too, and it asks "Could stricter adherence to the OLPC principles have brought about better academic outcomes?" Many students were not allowed to take their laptops home. Internet access was "practically non-existent." Just 70% of teachers had 40-hours of professional development before their students were given the devices.

That last (missing) piece -- training for teachers -- has long been something that gets overlooked when it comes to ed-tech initiatives no matter the location, Peru or the U.S. It is almost as if we believe we can simply parachute technology in to a classroom and expect everyone to just pick it up, understand it, use it, hack it, and prosper.

Oh right. OLPC has done just that, a la The Gods Must Be Crazy, whereby tablets were quite literally dropped into villages from helicopters. Okay, not everyone receives their devices this way, but OLPC has always been fairly hands-off in its training implementation efforts. It's one of the major criticisms that the organization has faced (along with criticisms about price, hardware, software, and environmental sustainability). For his part, Nicholas Negroponte, the head of the OLPC foundation, frequently points to the work of Sugata Mitra and the "Hole in the Wall Project" as inspiration -- the belief that children can learn (and teach each other) on their own. Children are naturally inquisitive; they are ingenious. Access to an Internet-enabled computing device is sufficient. They will "figure it out."

It's part of what Mitra and Negroponte call a "minimally invasive education." Considering the colonial legacy of education systems in the developing world, avoiding "invasion" seems profoundly important.

But there remains a strange tension between dropping in a Western technological "solution" and insisting doing so is "non-invasive."  At it's best, the OLPC represents a desire to support literacy, connectivity and learning through technology.  But it does those things in a world of ubiquitous cellphones, which on their own have not transformed education either. In an effort to be "non-invasive" then, OLPC ends up often being unsupportive -- unsupportive of the tech, the teachers and the learners.

But is that failure?  It doesn't feel like pointing to standardized test scores in math and language is the right measure at all to gauge this.  It goes against the core of the OLPC mission.  But then again, these measurements are political, not necessarily pedagogical.  And these scores reveal less about the global reach or potential of technology, and more about the dominant narratives of the U.S. education system:  "what counts" as learning, and "what counts" in terms of ed-tech's role in delivering or enabling it -- why, standardized test scores, of course.