I WENT TO SOME OF D.C.’s BETTER SCHOOLS. I WAS STILL UNPREPARED FOR COLLEGE.

OP ED By Darryl Robinson in the Washington Post | http://wapo.st/J02LdS 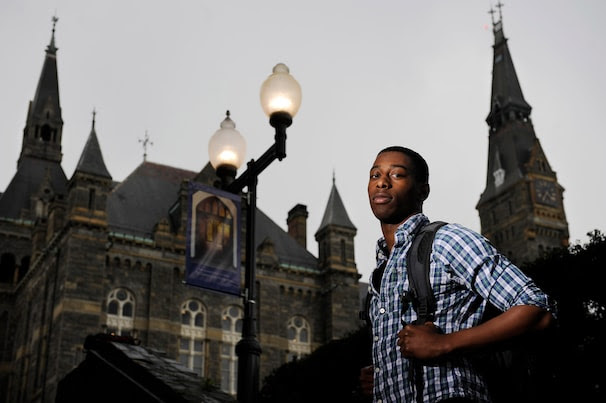 April 13  ::  Entering my freshman year at Georgetown University, I should have felt as if I’d made it. The students I once put on a pedestal, kids who were fortunate enough to attend some of the nation’s top private and public schools, were now my classmates. Having come from D.C. public charter schools, I worked extremely hard to get here.

But after arriving on campus before the school year, with a full scholarship, I quickly felt unprepared and outmatched — and it’s taken an entire year of playing catch-up in the classroom to feel like I belong. I know that ultimately I’m responsible for my education, but I can’t help blaming the schools and teachers I had in my early years for my struggles today.

Even though I attended some of the District’s better schools — including my high school, the Cesar Chavez Public Charter School for Public Policy, at the Parkside campus near Kenilworth — the gap between what I can do and what my college classmates are capable of is enormous. This goes beyond knowing calculus or world history, subjects that I didn’t learn in high school but that my peers here mastered long ago. My former teachers simply did not push me to think past a basic level, to apply concepts, to move beyond memorizing facts and figures.

Since the third grade, my teachers told me I was exceptional, but they never pushed me to think for myself. And when I did excel, they didn’t trust that I’d done the hard work. They assumed I was cheating. Now, only 10 milesfrom those teachers and schools where I was considered a standout, I’ve had to work double-time just to keep up.

I first noticed the gap between me and my classmates after my first writing assignment at Georgetown. In an English class to help prepare incoming freshmen, we were asked to analyze the main character’s development in “Persepolis,” a graphic memoir about growing up in Tehran during the Iranian revolution. I thought it was an easy assignment. Everyone’s papers were distributed to the class, and it was immediately obvious how mine fell short: I merely summarized the plot of the book without making any real argument. I got a D-minus.

I did what I’d been taught growing up in school: memorize and regurgitate information. Other Georgetown freshmen from better schools had been trained to form original, concise thoughts within a breath, to focus less on remembering every piece of information, word for word, and more on forming independent ideas. I was not. I could memorize and recite facts and figures, but I didn’t know how to think for myself. Now, in an attempt to think deeper, I sometimes overthink myself into silence.

One of the biggest challenges I faced in my first semester in college was in my chemistry lecture and lab. Since I hope to go to medical school, this is a required course. I took chemistry in high school, but I didn’t learn enough to make it in this class. I was lost from the first lecture on. Despite going to a tutor three days a week, I ended up dropping the class so that I could study more on my own and be ready for it next year. The experience of dropping a class was devastating, but it was the right choice.

When I started grade school at the Arts and Technology Academy, a public charter school in Northeast Washington, I had a speech impediment. Throughout first and second grade, I missed lunch most days to study how to pronounce sounds, practicing like a parrot. In class, my teachers would look past my waving hand whenever I wanted to answer a question. I had not earned the right to answer; I was the student who made all his S’s silent.

This made it extremely difficult for me; my teachers often ignored me because it took me longer to get my words out. I took taekwondo as a form of stress relief — and practiced getting back up again after being knocked down.

So while the other children answered questions, I listened. By third grade, my tongue and lips no longer tripped over each other. Every quiz or class assignment became a newly discovered moon; I was Neil Armstrong slamming my pen, my American flag, down once I had finished, letting everyone know that I was the first one done. I quickly became the star student, always receiving A’s.

But instead of being rewarded with praise, my teachers accused me of cheating multiple times. No matter how many stories I told of nights spent studying basic math with my grandmother, they didn’t seem to believe me. I suspect they thought my background — a black boy raised by his grandmother in Anacostia because my parents couldn’t take care of me — wouldn’t result in success. Failure was more believable than achievement.

Even when I was awarded a tacky certificate for being “student of the day,” one teacher stopped me with her coffee-stained smile the next day, muttering, “If it was up to me, you would have not won that award.” This teacher once told my classmates and me that she would get paid whether or not we learned anything.

School often felt like a battlefield. I coped with my teachers’ lack of faith and condescending comments by responding with sarcasm. When they told me of their doubts, I often credited their superb teaching skills for allowing me to “excel.” Soon my teachers came to admire the fact that I could so quickly respond to their put-downs. Maybe I was smart — or at least courageous — after all.

Once I got to high school, I maintained good grades simply by listening to my teachers and giving them what they wanted to hear: themselves. I could go to class, pay attention, and as long as I was respectful, I stood out as a great student. Classwork, homework and exams were all similar, as if someone were just cutting and pasting the questions in a different order.

I ended up at the Cesar Chavez Parkside campus. Cesar Chavez is a prep school where getting accepted to a college or university is a prerequisite for graduation. This is a great goal, but unfortunately, because students are often coming from low-performing D.C. elementary schools, teachers at Cesar Chavez spend a lot of time helping them catch up to the high school level, let alone preparing them for college.

It wasn’t until my junior year at Cesar Chavez that I first opened a textbook to learn material that a teacher had not given to me verbally. It was for Advanced Placement Human Geography, my first AP course. (I had to persuade the administration to let me in.) The class was by far one of the hardest I had in high school, along with AP English and thesis, a class in which we did independent research on a public policy issue. Suddenly, I was expected to think about concepts, such as public policy’s cause and effect, and apply these ideas to real-life situations. There was no one correct answer; if I could explain my position, I could be correct.

It dawned on me that this was what college would be like. But with less than two years left in high school, would I be ready? Before that class, all the papers I had written were hardly analytical, simply retelling the plot of a book. I felt cheated.

I stay in contact with most of my graduating class through Facebook. Many of my friends are at four-year schools on the East Coast, and they’ve been through similar struggles in their freshman year. Generally, we agree that our schools did not prepare us, even though they tried. My high school was one of the best I had the choice of attending; compared with other public schools in the District, it made an excellent attempt at getting me ready for college. But any high school administrator in Washington faces a problem similar to my professors at Georgetown: They’re stuck correcting the damage done before we got there.

After all my hard work and good grades in middle school and high school, this year I’ve struggled to become a university scholar. With my first year at Georgetown coming to an end, I hope my grades will reflect the extra effort I’ve put in every day. I go to tutoring twice a week, and I routinely attend my professors’ office hours. This has allowed me to express any frustrations I was having, and my professors could understand that I valued my education.

One of the biggest surprises has been discovering how academically independent I will have to be. No longer can I just listen to my teacher lecture for an hour and absorb everything. Now, I have to go out and get the material, reading more than what is required and doing exercises that I have given myself.

I can now lead discussions in class and have led calculus and biology study groups. I’m getting mostly A’s and B’s. This dedication leaves me little free time to go out on the weekend or visit home. My grandmother calls me daily to check up on me and offers moral support. My social life isn’t as exciting as I hoped it would be because I’m spending so much time studying. But all my extra effort has paid off: I’ve gone from floundering to finally making it at Georgetown.