Overall, the maps will keep together more neighborhood elementary and middle schools and the high schools they feed into. In District 5, school board member Bennett Kayser will have more familiar territory to represent, while in District 2, school board President Monica Garcia will add Garfield High to her boundaries.

The maps determine the voting areas for the sprawling Los Angeles Unified School District, the nation’s second largest. They also establish which board member a student, parent or district employee would seek out about an issue at a particular school. Boundaries must be adjusted, as needed, every 10 years to account for population shifts.

Leading up to the vote, City Council members and staff raised concerns about maps that had come forward from an appointed redistricting commission. These concerns included the separation of Marshall High in Los Feliz from some of the schools and neighborhoods that feed into it.

The thorniest issue emerged from the proposed maps for District 5 and District 2, which together stretch across central Los Angeles as well as east and northeast of downtown, before dipping down into the cities of Southeast L.A. County.

A coalition of Eastside activists supported the map that emerged from the appointed commission. They praised it for uniting El Sereno, East L.A., Boyle Heights and Lincoln Heights in Garcia’s District 2.

In past elections, “the collective Eastside voice has been diluted since some of our struggling schools are mixed in with schools that face different barriers in terms of academic opportunities,” said Maria Brenes, executive director of InnerCity Struggle, an Eastside nonprofit group. Brenes spoke at a Wednesday morning hearing of the Council’s Rules and Elections Committee, which preceded the council vote.

But this consolidation was achieved by reworking District 5 in a way that split a half-dozen attendance areas among three board districts, said city mapping consultant Dave Ely. The city attorney’s office added there were concerns about whether the new maps could be legally defended if challenged under the federal Voting Rights Act. That law enumerates many rules for drawing up election maps. They include keeping “communities of interest” together, ensuring appropriate representation of minorities and ethnic groups, and responding to community input.

As a result, revised maps emerged Wednesday, when they were unveiled publicly for the first time.

One change embodied no controversy. Board of Education members Tamar Galatzan and Steve Zimmer both wanted the old north-south border between their districts restored.

To address the Eastside, city staff and consultants recommended one of two options — neither of which was the final commission-approved map. One option was an earlier commission map that had undergone extensive public review. But the second option — the newly revised map — carried the day. It restored much of the prior District 2 and District 5 boundaries.

In District 5, Kayser called the Council’s revisions a step in the right direction. His district still retains an odd shape: a north and south lump connected by a thin line, but that thin line will largely coincide with its current location, along the eastern boundary of L.A. Unified. He also will represent the Marshall High attendance area.

In District 2, Garcia had been a main beneficiary of the commission-approved map. But in the version favored by the City Council, she retained one gain that she wanted: Garfield High.

Brenes, generally an ally of Garcia, said the latest compromise improved somewhat over the status quo because more of the Eastside will be united, but not as much as her community wanted. She wasn’t certain at Wednesday’s meeting whether her own El Sereno residence had landed in District 2 or District 5.

Also at the meeting was a small contingent that disagreed with Brenes and wanted Garfield High to remain in District 5, represented by Kayser.

The latest revision passed in City Council by a vote of 9-2. Voting no were Bernard Parks and Jan Perry.

For starters, they objected to the process that had resulted in the commission’s original recommendation. The commissioners, they noted, had approved a map that arrived to them by email at 2 a.m. on the same day as their final vote.

In an interview, Parks said the final amended map was an improvement over the commission’s choice, but “I could not vote for a map that has not been vetted by the public.”

“I don’t have a preference for a map,” Perry said. “I have process concerns when I hear reports that people were drawing maps based on what assets people wanted in their districts as opposed to keeping neighborhoods intact.”

Perry and Parks have also criticized the separate, city redistricting process, which resulted in major changes affecting areas they represent. 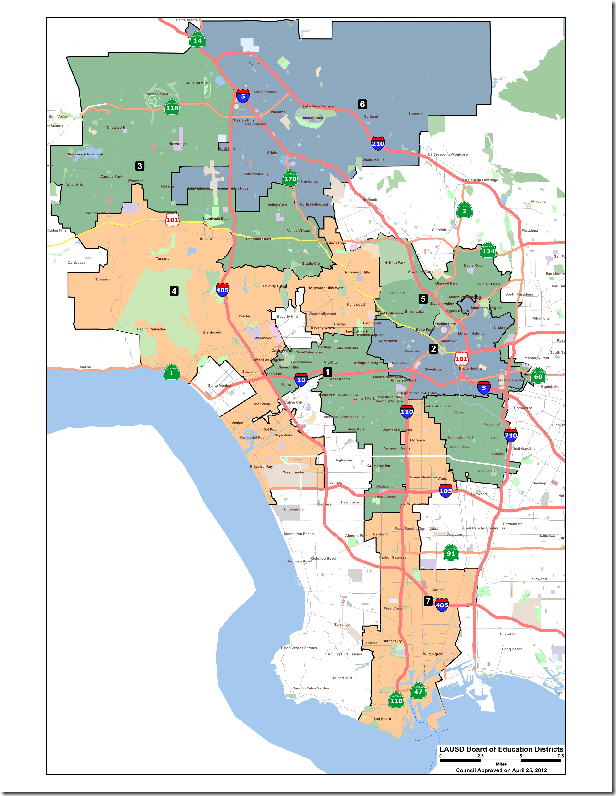 The 9-2 vote will allow the new boundaries to be in place for the 2013 school board elections. Council members Bernard Parks and Jan Perry opposed the proposal.

The new maps resolve earlier complaints over how Marshall High School and its feeder schools were divided, taking out a substantial portion of the area represented by school board member Bennett Kayser.

"It was a major problem and I think we went a long way to keep that area together," said Councilman Tom LaBonge, who chairs the council's Rules and Election Committee that oversaw the maps proposed by a citizens redistricting commission.

Parks and Perry said they were concerned that the citizens panel ignored an alternative map offered by a member of the public, comparing it the City Council redistricting process that sparked similar complaints.

"It's a lot like the process we had here and how South Los Angeles was affected," Perry said, referring to dramatic changes made to her own council district.

However, the new school district maps drew praise from one of the panel's commissioners, Jimmie Woods Gray, who also had earlier complained about how the final maps were presented.

Kayser, who had served on the city's Elected Charter Reform Commission and included a provision requiring that high schools and their feeder schools are kept together, said he was pleased with the new map.

"After all the drama and trauma, the `new' LAUSD Board District 5 is basically the district I ran for and won just nine months ago," Kayser said. "All I can say is, it's great to be back and I am thrilled for the chance to continue serving the very people who have placed their trust in me."

Mr. Blume: To avoid mentioning that Maria Brenes is married to defeated District 5 candidate Luis Sanchez (Mónica García's erstwhile Chief of Staff) borders on yellow journalism. InnerCity Struggle is a privatization minded 501C3 funded by the Broad and Gates Foundations through their UWGLA proxy. With $1,388,728 in revenues, Sanchez and Brenes' charter school marketing group saw the gerrymandering of District 2 as an opportunity to stuff more money in their pockets and to get Sanchez -- a favorite of arch-reactionary Philip Anschutz -- elected to the LAUSD BOE down the road. Opportunists, privatizers, and money snatchers are NOT people advancing struggle!