GIFTED PROGRAMS GO ON BLOCK AS SCHOOLS MUST DO WITH LESS

By JENNIFER GOLLAN | The Bay Citizen / A version of this article appeared in print on February 20, 2011, in the National edition of the New York Times | http://nyti.ms/htfVvj 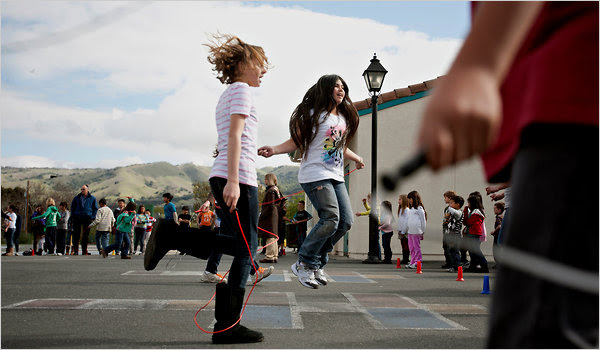 February 19, 2011 - When she was just 3, Teela Huff understood how to add numbers. By third grade, she was tutoring her peers.

“It helped me get through fourth grade.” Teela Huff, a fifth grader, on her now-defunct gifted classes.

“She can explain the problems to you without making you feel stupid,” one of Teela’s classmates wrote of her, according to her father, Tom.

But Teela’s quick mind — she is now a 10-year-old fifth grader but reads at a 12th-grade level — meant her classes at Silver Oak Elementary in San Jose were often boring and frustrating. She finally enrolled in a program for gifted children, where students wrestled with things like mind-bending math riddles and thought-provoking questions like how to survive on a desert island. And she loved it.

Her new adventures in learning ended in September, however, when the Evergreen School District eliminated all programs for its 790 or so gifted children. The move was part of a statewide wave of cuts in a program known as Gifted and Talented Education.

“I am worrying about keeping her engaged and getting educated,” said Tom Huff, a software developer. “In the long term, if schools are unable to engage bright children, as a society, we suffer. We need all of the smartest minds we can get.”

Budget problems, combined with policies and programs like the No Child Left Behind Act focused on improving overall educational performance in public schools, have put gifted programs in the expendable category. Local school districts, with permission from the Legislature, have been systematically taking money from the programs to cover budget shortfalls. School officials say they have no choice — but exceptionally talented pupils like Teela are paying the price.

There is acute awareness at the federal level that the country must invest in math, science and advanced education to invigorate economic growth and remain competitive. In his State of the Union speech last month, President Obama called for another Sputnik moment, referring to the Soviet Union’s launching of the Sputnik orbiter in 1957 that shocked Americans with its sophistication.

Investing in gifted-education programs is one of the surest ways to recreate that watershed moment, said Frank C. Worrell, faculty director of the Academic Talent Development Program at the University of California, Berkeley.

“We have focused on bringing up the bottom,” said Dr. Worrell, who has written extensively about gifted learners. “But we have failed to recognize that by ignoring the top, we are creating another problem. We are not sparking the creativity of those who have the most potential to make outstanding contributions, ranging from iPads to Post-it notes.”

In California, state money for Gifted and Talented Education (GATE) has fallen only modestly, to $44.2 million in 2009-10 school year, from $46.8 million in the 2008-9 school year. But those numbers obscure a more important change: in February 2009, the California Legislature adopted a plan that allowed public schools to divert state money for gifted children to “any educational purpose,” including closing budget deficits.

And divert they did. A study by the state Legislative Analyst’s Office, released last May, found that 68 percent of the 231 school districts surveyed had shifted resources away from education for gifted students since lawmakers approved the measure.

The plan, which was intended to give school districts more control over spending decisions as their finances eroded, has reverberated through classrooms across the state. At the beginning of this school year, the San Jose Unified School District stopped reimbursing schools for expenses related to the education of gifted students, including teacher pay and additional books and materials. Last fall, the Oakland Unified School District cut money for gifted programs by 25 percent.

“In a time when you are making steep reductions, the Legislature is trying to figure out the core activities that should be preserved in school districts,” said Edgar Cabral, senior fiscal and policy analyst with the Legislative Analyst’s Office. “This is the most flexibility that school districts have been given over the last 10 years in terms of eliminating restrictions for GATE funding.”

That latitude has manifested itself in the Evergreen School District, which shifted the money elsewhere this school year.

“We were facing incredible deficits, so we took advantage of the flexibility of the GATE funding to sweep those funds into our general fund to pay for things like salaries, health insurance and PG&E bills,” said Kathy Gomez, assistant superintendent of the Education Services Department at Evergreen. “I wish it didn’t have to be done.”

Before it cut the gifted program, Evergreen received roughly $97,300 from the state and supplemented that with about $123,000 from its general fund to pay for two teachers and materials.

Across the country, states vary wildly in terms of how much money they provide for gifted programs and the criteria they use to identify and test brainy students. State financing ranged from $250,000 in Montana to $91 million in Texas in the 2008-9 school year. While 32 states have a mandate to tend to the needs of gifted children, just 6 fully financed the programs in 2008-9, according to the National Association for Gifted Children.

School districts use various criteria to identify gifted students, including I.Q. tests, grades and standardized test scores. Gifted programs vary widely in the pace, depth and breadth of subjects they cover. Some promote intensive study of a core subject like reading, others foster analytical reasoning, and still others focus on creative problem solving.

In the Piedmont Unified School District, Zachary Crombie’s teachers recently encouraged him to go beyond the assigned homework by researching the design and financing of solar energy projects. Zachary, a gifted eighth grader, is also a year ahead in math at Piedmont Middle School.

“We would have to find a different program for him if the program didn’t exist,” said Zachary’s mother, Kathleen Crombie. “He would get in trouble because he would be bored.”

Despite the high praise from parents, gifted programs are sometimes criticized as elitist because they tend to be dominated by students from upper-income families, Dr. Worrell said. Wealthier parents are more likely to seek out such programs, and are more likely to enrich their children’s cognitive development with activities like reading.

But educators agree that, wealth aside, creative accomplishment is born from challenge. Teela Huff, a brown belt in karate who yearns to become a computer game designer, experienced this firsthand in the gifted program.

“It helped me get through fourth grade,” Teela said of the now-defunct gifted courses. “I would stare at the clock waiting for 8:30 a.m. when the gifted class started.”

Before the program was scrapped, Teela and other advanced students gathered in separate sessions away from the traditional classes for two half-days a month. They took on projects like dissecting a cow’s eye, which sparked a fascination with how the human body works.

“It was so cool and disgustingly weird,” said Teela, dressed in a gray T-shirt and jeans, her dark hair parted neatly in the middle. “We saw the lens of the cow’s eye and the blood vessels. It was a lot more interesting than seeing it in a book.”