WHAT WORKS IN THE CLASSROOM? ASK THE STUDENTS: Students Know Good Teaching When They Get It, Survey Finds

December 11, 2010 | How useful are the views of public school students about their teachers?

Quite useful, according to preliminary results released on Friday from a $45 million research project that is intended to find new ways of distinguishing good teachers from bad. 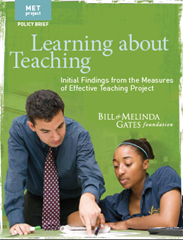 of a year, as measured by gains on standardized test scores, according to a progress report on the research.

Financed by the Bill and Melinda Gates Foundation, the two-year project involves scores of social scientists and some 3,000 teachers and their students in Charlotte, N.C.; Dallas; Denver; Hillsborough County, Fla., which includes Tampa; Memphis; New York; and Pittsburgh.

The research is part of the $335 million Gates Foundation effort to overhaul the personnel systems in those districts.

Statisticians began the effort last year by ranking all the teachers using a statistical method known as value-added modeling, which calculates how much each teacher has helped students learn based on changes in test scores from year to year.

Now researchers are looking for correlations between the value-added rankings and other measures of teacher effectiveness.

Research centering on surveys of students’ perceptions has produced some clear early results.

Thousands of students have filled out confidential questionnaires about the learning environment that their teachers create. After comparing the students’ ratings with teachers’ value-added scores, researchers have concluded that there is quite a bit of agreement.

Classrooms where a majority of students said they agreed with the statement, “Our class stays busy and doesn’t waste time,” tended to be led by teachers with high value-added scores, the report said.

The same was true for teachers whose students agreed with the statements, “In this class, we learn to correct our mistakes,” and, “My teacher has several good ways to explain each topic that we cover in this class.”

The questionnaires were developed by Ronald Ferguson, a Harvard researcher who has been refining student surveys for more than a decade.

Few of the nation’s 15,000 public school districts systematically question students about their classroom experiences, in contrast to American colleges, many of which collect annual student evaluations to improve instruction, Dr. Ferguson said.

“Kids know effective teaching when they experience it,” he said.

“As a nation, we’ve wasted what students know about their own classroom experiences instead of using that knowledge to inform school reform efforts.”

Until recently, teacher evaluations were little more than a formality in most school systems, with the vast majority of instructors getting top ratings, often based on a principal’s superficial impressions.

But now some 20 states are overhauling their evaluation systems, and many policymakers involved in those efforts have been asking the Gates Foundation for suggestions on what measures of teacher effectiveness to use, said Vicki L. Phillips, a director of education at the foundation.

One notable early finding, Ms. Phillips said, is that teachers who incessantly drill their students to prepare for standardized tests tend to have lower value-added learning gains than those who simply work their way methodically through the key concepts of literacy and mathematics.

Teachers whose students agreed with the statement, “We spend a lot of time in this class practicing for the state test,” tended to make smaller gains on those exams than other teachers.

“Teaching to the test makes your students do worse on the tests,” Ms. Phillips said. “It turns out all that ‘drill and kill’ isn’t helpful.”