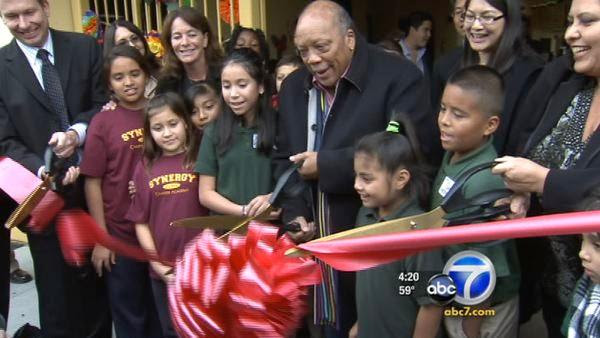 Wednesday, December 15, 2010 - SOUTH LOS ANGELES (KABC) -- Music legend Quincy Jones has worked with the top stars, from Frank Sinatra to Michael Jackson, and in more than six decades has picked up dozens of Grammy awards, more than any other living musician. Wednesday another special honor for Jones: the dedication of the new Quincy Jones Elementary School.

It was a special day for faculty students and parents at the Quincy Jones Elementary School in South L.A. None other than musical legend Quincy Jones took part in a special ribbon-cutting to officially open the campus.

"Nothing touches this," said Jones. "I had one when they built a performing arts building at Garfield High School that made me cry. My father would cry. And this one, this is really, really special, in my home town too."

"It's awesome, just seeing Quincy Jones in the school and the way the Quincy Jones kids are always learning, and we are always trying to learn in this school," said student Rigoberto Mani.

This is the only campus named after Quincy Jones, a 27-time Grammy award winner -- the most of any living musician -- so it was a special day for the folks at the campus.

"So proud to have my kids at this school," said parent Guadalupe Rodriguez. "It's the most beautiful thing that could happen to a parent to have teachers and people dedicated like this."

L.A. Unified School District officials say that with schools learning through jazz music and art education, naming the campus after Quincy Jones is a perfect fit.