NEW OVERSEER FOR CHARTERS URGED: State board too consumed by charter petitions

Posted on 12/02/10 • Charter schools have become a time sink for the State Board of Education, with a third of its time spent dealing with schools serving 5 percent of California’s students. Relieving that burden is one reason that the Little Hoover Commission, a state oversight body, is recommending that California establish an independent body to directly authorize and oversee charter schools.

A California Board of Charter Schools would not replace local districts and county offices of education, which are still the primary authorizers of charters, but it would offer an alternative path for charter applicants, and, under the Little Hoover Commission’s plan, it would have the ability to revoke the authorizing power of local districts that are either too lax in monitoring charters or discriminatory in keeping them out. The Little Hoover Commission heard evidence that both situations exist.

Creating the charter school board is not a new idea. The Little Hoover Commission and the Legislative Analyst have recommended this before. And Caprice Young, the former CEO of the California Charter Schools Association, reports she urged it as well as a member of Gov. Schwarzenegger’s Committee on Education Excellence. With the continued rapid growth of charter schools – there are now 912, the most in any state by far – and the number of appeals before the State Board growing, the idea has again surfaced.

The Board of Charter Schools would operate within the state Department of Education, with its members appointed by the governor and the Legislature. The state Board of Education would continue to hear the appeals from charters denied by local districts and county education offices, and would keep its power to revoke poorly performing or dishonest charters. The Little Hoover Commission expects, however, that over time, the State Board of Education would see a diminishing caseload, opening up more time for it to focus on broader policy questions.

Colorado and Arizona also have  independent charter authorizing boards. In several states, colleges and universities are charter authorizers as well, but the Little Hoover Commission said that California institutions of higher education have lobbied against the idea. 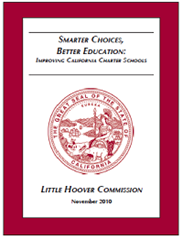 smf's 2¢: Let me make sure I have this straight: The Schwarzenegger appointed State Board of Education – disproportionally loaded with folks from the charter school community and headed by a venture capitalist who bankrolls charter schools – is overwhelmed with charter school petitions?

If they are so overburdened maybe they should take the same route as the Schwarzenegger administration’s  Community Care Licensing Division of the Department of Social Services - who approve and license Head Start Programs, Day Care and Preschools …and simply refuse to grant any new charters. [see http://bit.ly/f34FC2]