SENIORITY RULES, BUT DO STUDENTS LOSE?

smf:   the LA Times is about to drop another shoe in its school reform jihad in Sunday's print edition. This is the first round in that next mixed-metaphorical attack: this time on teacher seniority / longevity / experience / educational attainment.

Once upon a time there were two newspapers in this town:

The answer, gentle readers, is this report.

“Old Age and Trickery’, the old saw has it, “will overcome youth and ambition”.  That’s a paradigm I – as an older trickster – am much invested in.  There are certainly old teachers who are better tricksters than they are teachers – and good young teachers who have been laid off because they lack seniority. Advanced degrees don’t necessarily translate into teaching skill. But other studies (cited in 4LAKidsNews) show that un-and-under qualified teachers are just one step above no teacher at all. Or, I submit, less than a step.

And seniority isn’t just a union policy, it’s state and federal labor law meant to protect us geezers from you whippersnappers.

Times reporter Jason Felch points out the value-added methodology and this new study are shallow+limited – only relying upon student achievement test scores …but he still thinks it’s the greatest thing in school reform since sliced bread.

Because slicing and dicing and cutting and rightsizing is what education is all about.

Seniority rules, but do students lose? 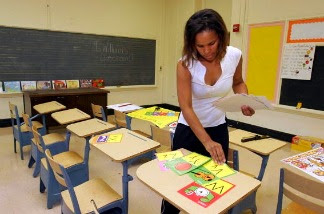 In the most recent installment of the L.A. Times’ “Grading the Teachers” series another long standing union practice comes under fire—seniority. The Times analyzed eight years worth of value-added test score data and found that 200 effective teachers were laid off to spare their more senior-- and in some cases less effective--counterparts. The teacher’s union argues that until teacher evaluations can be standardized, seniority is the only fair way to go. But if seniority rules and young successful teachers get the pink slip, who wins? Is there a fair way to determine which teachers get the boot when times are tight?