JUST IN TIME FOR THE HOLIDAYS, L.A. SCHOOLS LAY OFF MORE THAN 1000 STAFF 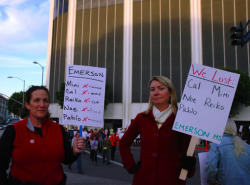 It's true. But you also need librarians, janitors, and aides. Who do you call when somebody spills their chemistry experiment, or when a special needs student requires extra help? Or, even worse, if an emergency happens? Without the thousands of people who support teachers and students, things start to get out of hand.

And that's exactly what employees of the Los Angeles Unified School District are worried about: their schools unraveling because they've just been laid off. The school district terminated more than 1,000 employees Wednesday because of district budget cuts, despite available federal money that could keep people working and schools running smoothly.

"I know every kid's name. I know their parents, their siblings," said Carole Koneff, a library aide at Third Street Elementary. "You're part of the DNA of the school, you're part of the makeup."

Other staff have been demoted and given pay cuts, like Jaime Escarzaga, who's a plant manager at a middle school. Escarzaga says it's not just a matter of his livelihood- it's a matter of safety. Support staff, he says, keep students and teachers safe.

"We get to know these schools like the back of our hand,” he says.

Although no teachers were cut in this round of layoffs, teachers are also standing up and fighting what they see as an interruption of their school environment.

United Teachers Los Angeles is urging the school district to use Federal Education Jobs money, cash allocated by federal government to help struggling states keep school employees in their jobs, to keep their co-workers from being fired. They say the money should be used to keep these support staff in their jobs.

Marla Eby, director of communications for the union, says the school district has decided to spend the money next year, rather than this year.

"The LAUSD claims they will be 'saving jobs' next year, but that is not helpful to people who are losing their jobs right before Christmas," said Eby. She says teachers are expecting another round of layoffs in 2011.

With so many states and local governments hurting for cash, perhaps the L.A. school district should be applauded for at least trying to keep teachers in their jobs. But even great teachers, without the support they need to keep their school running, will struggle to concentrate on educating students when there's no one around to help them. Stand with these laid-off workers and sign this Change.org petition to tell L.A. to find a way to keep their jobs.

Megan Cottrell is a reporter and writer living in Chicago.