INGLEWOOD UNIFIED TO ASK CALIFORNIA FOR A BAILOUT LOAN; WILL LEAD TO DISTRICT TAKEOVER 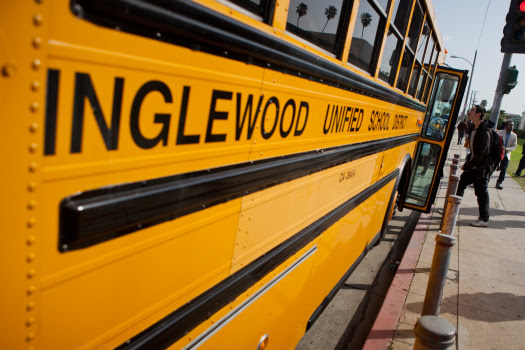 27 July 2012  ::   Inglewood's school board voted this Wednesday to ask the state for a bailout loan that would result in a state takeover of the 1,500-student district.

The Inglewood Unified School District has moved one step closer to fiscal insolvency. Its school board voted this Wednesday to ask the state for a bailout loan that would result in a state takeover of the 1,500-student district.

“We’re scheduled to run out of money in December of 2012," said Alena Giardina, a member of the school board who says the district's $9 million in the red. "So the problem would be if we don’t start the process now, we will have already allowed the time to lapse, so this is actually a precautionary measure."

Giardina says the district will do what it can to avoid insolvency — including laying off dozens of employees to close the deficit.

Christopher Graber, with the union that represents district custodians, clerks and cafeteria workers, says the board’s been a poor fiscal manager.

"We’ve seen so many foolish decisions that this board makes in the sense of rewarding people at the top," Graber said. "[I] don’t think [they think] of people at the bottom."

L.A. County education officials are looking through Inglewood Unified’s books and will recommend a bailout loan amount to the state Legislature in the next few months.