MICROSOFT’S DOWNFALL: INSIDE THE EXECUTIVE E-MAILS AND CANNIBALISTIC CULTURE THAT FELLED A TECH GIANT 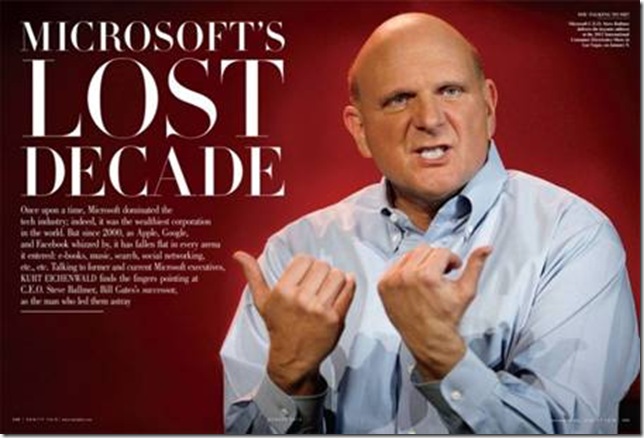 Analyzing one of American corporate history’s greatest mysteries—the lost decade of Microsoft—two-time George Polk Award winner (and V.F.’s newest contributing editor) Kurt Eichenwald traces the “astonishingly foolish management decisions” at the company that “could serve as a business-school case study on the pitfalls of success.” Relying on dozens of interviews and internal corporate records—including e-mails between executives at the company’s highest ranks—Eichenwald offers an unprecedented view of life inside Microsoft during the reign of its current chief executive, Steve Ballmer, in the August issue. Today, a single Apple product—the iPhone—generates more revenue than all of Microsoft’s wares combined.

Eichenwald’s conversations reveal that a management system known as “stack ranking”—a program that forces every unit to declare a certain percentage of employees as top performers, good performers, average, and poor—effectively crippled Microsoft’s ability to innovate. “Every current and former Microsoft employee I interviewed—every one—cited stack ranking as the most destructive process inside of Microsoft, something that drove out untold numbers of employees,” Eichenwald writes. “If you were on a team of 10 people, you walked in the first day knowing that, no matter how good everyone was, 2 people were going to get a great review, 7 were going to get mediocre reviews, and 1 was going to get a terrible review,” says a former software developer. “It leads to employees focusing on competing with each other rather than competing with other companies.”

When Eichenwald asks Brian Cody, a former Microsoft engineer, whether a review of him was ever based on the quality of his work, Cody says, “It was always much less about how I could become a better engineer and much more about my need to improve my visibility among other managers.” Ed McCahill, who worked at Microsoft as a marketing manager for 16 years, says, “You look at the Windows Phone and you can’t help but wonder, How did Microsoft squander the lead they had with the Windows CE devices? They had a great lead, they were years ahead. And they completely blew it. And they completely blew it because of the bureaucracy.”

According to Eichenwald, Microsoft had a prototype e-reader ready to go in 1998, but when the technology group presented it to Bill Gates he promptly gave it a thumbs-down, saying it wasn’t right for Microsoft. “He didn’t like the user interface, because it didn’t look like Windows,” a programmer involved in the project recalls.

“The group working on the initiative was removed from a reporting line to Gates and folded into the major-product group dedicated to software for Office,” Eichenwald reports. “Immediately, the technology unit was reclassified from one charged with dreaming up and producing new ideas to one required to report profits and losses right away.” “Our entire plan had to be moved forward three to four years from 2003–04, and we had to ship a product in 1999,” says Steve Stone, a founder of the technology group. “We couldn’t be focused anymore on developing technology that was effective for consumers. Instead, all of a sudden we had to look at this and say, ‘How are we going to use this to make money?’”

A former official in Microsoft’s Office division tells Eichenwald that the death of the e-reader effort was not simply the consequence of a desire for immediate profits. The real problem for his colleagues was the touch screen: “Office is designed to inputting with a keyboard, not a stylus or a finger,” the official says. “There were all kinds of personal prejudices at work.” According to Microsoft executives, the company’s loyalty to Windows and Office repeatedly kept them from jumping on emerging technologies. “Windows was the god—everything had to work with Windows,” Stone tells Eichenwald. “Ideas about mobile computing with a user experience that was cleaner than with a P.C. were deemed unimportant by a few powerful people in that division, and they managed to kill the effort.”

When one of the young developers of MSN Messenger noticed college kids giving status updates on AOL’s AIM, he saw what Microsoft’s product lacked. “That was the beginning of the trend toward Facebook, people having somewhere to put their thoughts, a continuous stream of consciousness,” he tells Eichenwald. “The main purpose of AIM wasn’t to chat, but to give you the chance to log in at any time and check out what your friends were doing.” When he pointed out to his boss that Messenger lacked a short-message feature, the older man dismissed his concerns; he couldn’t see why young people would care about putting up a few words. “He didn’t get it,” the developer says. “And because he didn’t know or didn’t believe how young people were using messenger programs, we didn’t do anything.”

“I see Microsoft as technology’s answer to Sears,” said Kurt Massey, a former senior marketing manager. “In the 40s, 50s, and 60s, Sears had it nailed. It was top-notch, but now it’s just a barren wasteland. And that’s Microsoft. The company just isn’t cool anymore.”

“They used to point their finger at IBM and laugh,” said Bill Hill, a former Microsoft manager. “Now they’ve become the thing they despised.”

Stack rankings: An example of the misunderstanding and misuse of statistics

The performance management system of "stack ranking" has been in the news this week. Stack ranking is controversial for a number of reasons but our particular bugbear is that it is an example of the broader misunderstanding and misuse of statistics that is endemic in many organisations.

As we move into the age of Big Data, understanding what statistical probabilities indicate will become dramatically more important. Organisations need to start getting this right as soon as possible.

Last week, Vanity Fair published an article about Microsoft, making a point that the company's staff performance management system, stack ranking, was responsible for "crippled innovation". We see this as one of a rising tide of examples of the misunderstanding of statistics that is endemic in many organisations, and that, with the rise of big data, could prove fatal. According to author Dick Grote, quoted in CBS News, stack ranking, also known as forced ranking, is used by a third of Fortune 500 organisations. This makes this particular misuse of statistics hugely widespread.

Stack ranking is a performance measurement system that, in Vanity Fair's words, "forces every unit to declare a certain percentage of employees as top performers, good performers, average, and poor." The problems with stack ranking from an employee perspective, particularly in organisations that produce intellectual capital, are widely documented, and include: business units are often challenged with too many good performers, so these strong team members have to be marked down to fill the quota; managers retain poor performers without encouraging them to improve, so that good performers don't have to be marked down; and team members compete with each other rather than work together, because they know that someone has to fill the bottom slot in the annual appraisal table.

As we move into the age of Big Data, we will move away from deterministic systems that give us answers and towards a more stochastic world, where systems crunch the data to give us probabilities and likelihoods instead of simple answers. Understanding what statistical probabilities indicate will become dramatically more important. The data we use to support decisions and how we integrated, derived it and enrich it will become more complex across multiple dimensions.

We need to question methodologies that are misusing statistics and have cultures in place to evolve these methodologies towards ones that use statistics to help us get to what is truly important: what is causing our success or failure, how can we maintain success and improve on failure, and how is the external environment changing so that we need to evolve?

Does your organisation misunderstand statistics, apply statistics on small numbers or arbitrary segments, confuse causality and correlation, or assume statistics dictate reality rather than reflect it?

Human Resources: Is employee stack ranking a good thing or not? -

Bob Sutton, a Stanford professor in management science, has a great book that analyzes Fortune 500 practices like stack-ranking, pay-for-performance, etc. It's called Hard Facts: Profiting from Evidence-Based Management http://www.amazon.com/Facts-Dang.... Definitely one of my favorite books.

Without going into epic detail, the book goes into a bit of the history behind these practices (as pioneered and championed by management consulting firms) and how they were installed at many F500 companies. Turns out, they were added in without measurement/evidence but backed by lots of high-level economic theories. Today they are part of part of a family of widely accepted but relatively untested theories that comprise "business strategy."

Sutton then makes several points about management practices like stack-ranking. The big thesis is that these practices greatly undervalue teamwork and collaborative contribution and overvalue individual contribution - not a surprise, given the American cultural theme of individualism. But in creative, multidisciplinary, cross-functional teams, it's can be ambiguous, unscientific, and harmful to separate out who deserves credit for what.

The book goes into a bunch of empirical research supporting this general theme of American business culture overvaluing individuals over teams, but will leave it to interested Quora folks to read the book and underlying research. Look forward to someone writing an even better answer here :)

Is this why Bill Gates is deforming public education -- for the money?