July 3, 2012  ::  Higher education as we know it is about to come to an end. After all, there are no jobs for college graduates, certainly not for liberal arts students. Moreover, even were such students employable, they come out of school so burdened with debt that they will never dig their way out. The educational equivalent of eight-track tapes, traditional colleges and universities will vanish almost entirely, replaced by slimmer, more technologically advanced online and for-profit models.

As college presidents who hear such proclamations over and over again, we find ourselves suppressing the urge to yawn, and not because we lose sleep over them. Rather, we are reminded of Marcel Proust's splendid observation in "Remembrance of Things Past": "The one thing that does not change is that at any and every time it appears that there have been 'great changes.'"

We take comfort in the fact that for more than a century predictions about the impending demise of classic higher education have met the same fate: They have been utterly wrong. Around 1900, David Starr Jordan, the founding president of Stanford, forecast the end of the liberal arts college. Others foresaw financial ruin for higher education during the Depression, when public colleges suffered 40% reductions in funding and private institutions lost more than a quarter of their endowments and more than 70% of gifts from benefactors. Then came proclaimers of the end of educational excellence resulting from democratization associated with the GI Bill, followed by prophets of demographic devastation from the large baby boom generation, and conversely, from the baby bust.

In short, there has been no scarcity of doomsayers. We thought that economists were bad at predicting. Next to educational pundits, they have the vision of Nostradamus.

Present-day alarmists fare no better. Though college debt levels clearly are something to monitor, the vast majority of students graduate with relatively small debt burdens — about $25,000 on average — and about one-third leave college with no debt at all. Meanwhile, the college premium — the ratio of college earnings to high school earnings — is at or near record levels and has been increasing decade after decade since the late 1970s. While for-profit colleges enroll an increasing percentage of all undergraduates, the demand for education at selective private and public universities and colleges continues to grow, as evidenced by dramatic declines in the percentage of applicants they admit. And worry that on-line education will replace the four-year undergraduate growth experience that takes place on a college campus seems as unfounded now as when first articulated 20 years ago.

Still, as the saying goes, even paranoids on occasion have people chasing them. The truth is that we don't always sleep well at night. But what keeps us up is surprisingly similar to what we suspect kept up chancellors at Oxford University half a millennium ago: How can we best provide students with a balance of the practical skills they'll need for the world that awaits them and the abstract wisdom that will help them adapt when that world, and they themselves, change? How do we assist our students in their almost-universal desire to make a positive impact on society, while they are in college and after they graduate and become leaders in their communities? What should be the role of our institutions in addressing society's most challenging issues?

And of course, our constant worry: Will we be awakened with word that a young person has done something reckless that harmed him or others, something we might have prevented? These are the issues that we wrestle with during our days and our nights.

One other thing worries us. There is a surefire way to make today's dire predictions come to pass — if educational leaders feel compelled to listen to scaremongers who are all too anxious to force us to adopt a new model that eliminates outstanding professors and their passion for teaching, research budgets and the pursuit of new knowledge, the residential college experience and the core commitment to excellence that have made American higher education the leader in the world. If that were to happen, we might end up with colleges and universities that aren't worth saving.

letters to the editor of the LA Times | http://lat.ms/NeflGI 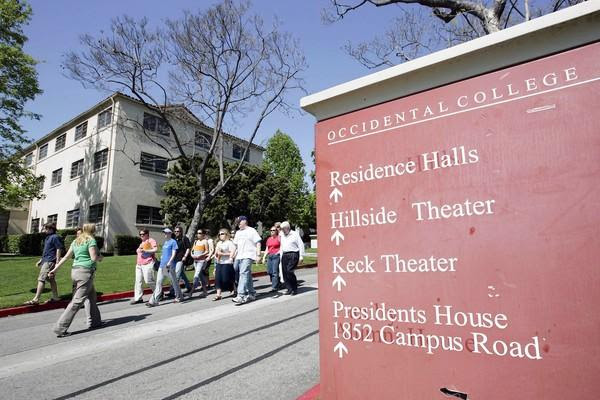 American colleges are under pressure from rising costs and an uncertain job market. Here, a student leads a tour of Occidental College in Eagle Rock. (Los Angeles Times / July 6, 2012)

Re "College fights on," Opinion, July 3


Barry Glassner and Morton Schapiro, both college presidents, comfort us by their refusal to adopt "a new model that eliminates outstanding professors" in our liberal arts colleges, which have long valued excellence in teaching and research, and the mutually beneficial intellectual bond between student and faculty. Unfortunately, not all college presidents are created equal.

Some leaders of our distinctive liberal arts colleges are quietly but intentionally hiring adjunct and part-time faculty (many of whom are deserving of a full-time tenured position) to replace the outstanding professors who retire, in order to impress their boards of trustees (who may have a corporate model of higher education in mind) with budget surpluses. At the same time, we see increases in tuition and in class size and student-faculty ratios, long considered a measure of quality.

How would parents react if they knew that as many as half of the courses at their child's college were taught by these new professors who are underpaid and overworked? Not happily, for sure.

These two college presidents "suppressing the urge to yawn" when hearing of the debt burden and lack of economic opportunity facing college graduates perfectly illustrate the detachment of such educators in their ivory towers.

Unlike the world of the university, with its tenured positions guaranteeing employment for life and its bloated salaries for college presidents, life in the real world for many graduates of these institutions is not so cushy. Perhaps it is time to send a wake-up call to these yawning college presidents with a reduction in federal subsidies to higher education.

These institutions should not be immune to the economic realities of the times.