Asked+Answered: CAN KIDS BE TAUGHT PERSISTENCE? 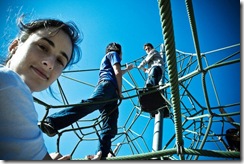 July 27, 2012 | 8:00 AM   ::  In his new book How Children Succeed: Grit, Curiosity, and the Hidden Power of Character, author Paul Tough makes the case that persistence and grit are the biggest indicators of student success. Being resilient against failure, he says, is the fundamental quality we should be teaching kids, and he gives examples of where that’s being done.

Dominic Randolph, the headmaster at the elite Riverdale Country School in the Bronx, New York, who believes students don’t know how to fail, is one of the sources in Tough’s book who has set out on a road to change an “impoverished view” of learning. Rather than producing students adept at “gaming” the system, “we have got to change the educational system to think about different outcomes and different capacities,” he says. 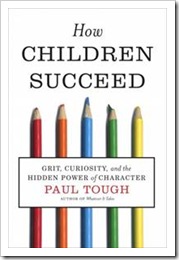 Another primary source in the book is David Levin, co-founder of the charter KIPP Academy, who developed a student character report card to cultivate this resilience and self control in his students. With Levin’s KIPP Academy as a case study, Tough tracks persistence among low-income kids who aim to go to college, taking special note of those who have the skill in

“What I think is important on the road to success is learning to deal with failure, to manage adversity. That’s a skill that parents can certainly help their children develop—but so can teachers and coaches and mentors and neighbors and lots of other people.”

engaging with people who are different from them, or what educators refer to as “code switching.” Tough’s research indicates that students who possess this “code switching” ability, as well as self control, optimism, and curiosity, also show an ability to recover from setbacks.

At KIPP Academy, kids wear school spirit sweatshirts with pro self-control slogans like “Don’t Eat the Marshmallow!”– a nod to Walter Mischel’s renowned cognitive psychology study on self control. But it’s hard to teach kids how to be grateful, how to demonstrate self control, so KIPP teachers use character language to show kids how to slow them down, to understand the mistakes they’re making.

Tough, who wrote Whatever It Takes in 2008, about Geoffrey Canada and the Harlem Children’s Zone, said in an interview that these intangible qualities — self-control, perseverance, and grit — are far more important than letter grades in accounting for student success.

“Until recently, most economists and psychologists believed that the most important factor in a child’s success was the IQ. This notion is behind our national obsession with test scores. From preschool-admission tests to the SAT and the ACT—even when we tell ourselves as individuals that these tests don’t matter, as a culture we put great faith in them. All because we believe, on some level, that they measure what matters,” he said. “But the scientists whose work I followed for How Children Succeed have identified a very different set of skills that they believe are crucial to success. They include qualities like persistence, curiosity, conscientiousness, optimism, and self-control. Economists call these non-cognitive skills. Psychologists call them personality traits. Neuroscientists sometimes use the term executive functions. The rest of us often sum them up with the word character.”

Critics have argued that what Tough is really talking about are life skills that can’t be taught. But a report released recently by the National Research Council of the National Academies of Science in Washington suggests that recognizing the intangible qualities is an important part of education. The report, Education for Life and Work: Developing Transferable Knowledge and Skills in the 21st Century describes “important set of key skills that increase deeper learning, college and career readiness, student-centered learning, and higher order thinking. These labels include both cognitive and non-cognitive skills- such as critical thinking, problem solving, collaboration, effective communication, motivation, persistence, and learning to learn.”

It’s that idea — whether kids can learn to learn — that concerns both parents and teachers.

“What I think is important on the road to success is learning to deal with failure, to manage adversity,” Tough said. “That’s a skill that parents can certainly help their children develop—but so can teachers and coaches and mentors and neighbors and lots of other people.”

smf: Any study that uses KIPP as an example of how to “manage” children is beyond suspect, it goes all the way to suspicious …and requires admission to the conspiracy of “Usual Suspects”.

KIPP uses shame as a weapon/disciplinary tool. Kids who don’t do their homework, misbehave or otherwise fail-to-comply with the program are forced to wear their uniform shirts inside out, are denied a seat at the desk and relegated to the floor – and the other students are not permitted to speak to them.*

This is nothing more-nor-less than the kinder/gentler paddle hanging behind the principal’s desk. It doesn’t leave bruises where anyone can see them.

* OK, This was how it was at the KIPP School I visited a few years back. Things may have changed – or that school may have been a bad example. However the school was was selected by KIPP as an exemplary school, they were proud of it - so my natural paranoid suspicion is that it was better than most!

4LAKids reader Katy H. writes: I’m a parent of a 7th grader and I will tell you that character is far more important to me and my fellow parents than my child’s score on a standardized test. I’m sure this is a useful book, with a great topic, and am grateful for the work others are doing, but these ideas are not exactly new.

I’m also a teacher and I have a large circle of teaching colleagues who all teach in traditional public schools. We have always put a priority on ‘character’ and so-called 21st Century skills (even in the 20th Century!) and have long known they can and should be cultivated in all subject areas.

We also know they are achieved in a dramatic way through consistent practice in the Arts, which are, unfortunately, nearly always treated as an ‘extra’ or as ‘enrichment.’ Showing up for rehearsal with the work of your part learned, or your stage-managing script prepared, and communicating, collaborating, imagining, experimenting with different acting, set choices toward the greater good of putting on a show, requires ‘grit’ practice in an exponential way. The same applies to all arts disciplines. In addition to specific discipline skills being taught, the character skills that are developed, with the guidance and support of teachers, are transferable to all areas of learning. The student who is drilled to fill in the correct bubble to get the correct result will be the employee who gets a job and expects a paycheck. The student who is practiced in the Arts will be the employee – or entrepreneur - who offers new ideas, leads teams, works because they love it – who may even have a good sense of humor. Rather than a diversion, the Arts act as an accelerator to both content and the development of persistence and ‘grit’ in students.

We teachers now face extreme pressure to spend our time on the acquisition of better test results. When I hear, ‘We don’t have time for arts,’ I gently push back and say, ‘oh but remember, our goal is whole, persistent, contributing citizens! Arts accelerate learning, not detract from it.’ We do what all good entrepreneurs, artists, and scientists do: we challenge assumptions and find better ways to achieve the goal of graduating students who are not only knowledgeable, but also hardworking, curious, compassionate, persistent and creative problem-solvers.