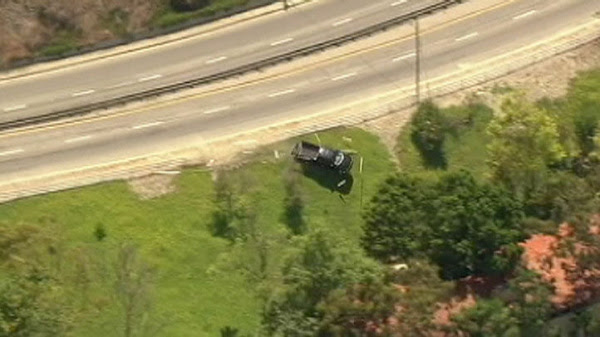 NBCLA ::  An LAUSD teacher suspected committing lewd acts on children took police on a chase ending with a crash on Tuesday, July 10, 2012.

16 July, 11:42 AM ::  An L.A. Unified physical education teacher who careened off the freeway following a police chase has been placed on unpaid leave today after he was charged with multiple felony counts of sexually molesting a 14-year-old girl, district officials said.

Kip Richard Arnold, 51, a Southeast Middle School teacher, was charged Friday with three felony counts of lewd acts on a child who was 14, two counts of oral copulation of a person under 16, one count of sexual penetration by a foreign object, plus one count of evading an officer, according to Deputy District Attorney Diana Martinez.

"The staff of employee relations will monitor the criminal proceedings until the matter is concluded," said LAUSD spokeswoman Gayle Pollard-Terry. She said the state's education code requires a mandatory leave of absence when a teacher is charged with committing a sex offense.

"Credential documents will be suspended upon receipt of the charging document of a specific child sex crime," said Erin Sullivan, a spokesperson for the Commission on Teacher Credentialing.

Arnold has been a teacher with LAUSD for eight years and previously worked at Nimitz Middle School, Gage Middle School and Orchard Academies 2B.

"The minute he's released [from the hospital] they'll arrest him and he'll be in court," Robison said.

Arnold was allegedly involved in a sexual relationship with a 14-year-old girl at Nimitz Middle School between June and September 2005. The woman, now an adult, reported the incident to the Bell Police Department on July 5.

According to the felony complaint for arrest warrant, Arnold "willfully, unlawfully and lewdly commit[ted] a lewd and lascivious act upon and with the body of" the 14-year-old "with the intent of arousing, appealing to, and gratifying [his] lust, passions and sexual desires."

Bell police detectives said they were preparing to arrest the Lakewood resident Tuesday and approached his black pickup truck to question him. Arnold allegedly made a comment about being suicidal and fled, leading police on a multi-freeway chase for about 40 minutes, said Bell Police Lt. Ty Henshaw.

The chase ended when Arnold careened over an embankment in Rolling Hills Estates and crashed into a building 70 feet below, according to the district attorney's office.

Prosecutors will ask that bail be set at $1 million. If he is convicted, Arnold will face up to seven years in state prison.

L.A. Unified sent out a pre-recorded call to parents and staff at Nimitz Middle School, Southeast Middle School and Bell High School to inform them of the chase and the teacher's arrest last week.

Henshaw said the department is not sure if there are other victims but are asking people with more information to come forward.

●●smf: This 2¢ is a bonus to the right people for doing the right things.  Everyone is on furlough or vacation or some new payroll basis and/or calendar  – maybe that’s the reason.  The teacher – who has been charged but not convicted -  was put on unpaid leave. All the right paperwork is being pulled together and the case will be reported to the Commission on Teacher Credentialing as soon as possible – which is statutorily the responsibility of the superintendent. Children have been protected and so have the rights of the accused. The matter was handled by the District’s Communications Office – who have explained the situation, referred inquiries to the appropriate folks in Sacramento and law enforcement. Employee Relations will monitor the criminal proceedings until the matter is concluded . Nobody has grandstanded and tried to investigate or made a case about how hard it is to fire bad teachers; nobody has stonewalled or passed-the buck and said “no comment”. Parents were informed by recorded message and hopefully appropriate live staff in LAUSD and law enforcement is standing by to answer their questions.

Good job: The teachable moment about the safety and welfare of children, due process and the presumption of innocence was well and quietly used. In teaching we learn ourselves.