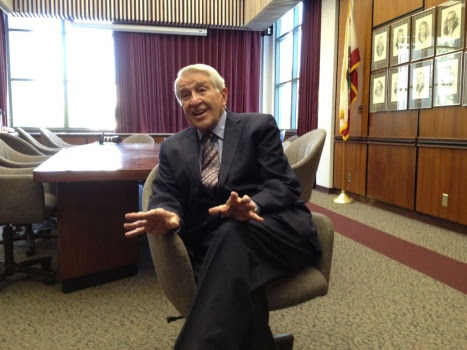 9 July 2012  4:56PM  ::  The governing board of the California Community Colleges is considering a major system-wide change to how its 112 campuses enroll students that would prioritize those working toward a degree, certificate or transferring, over avocational or hobbyist students.

The proposal, which was presented to the Board of Governors today, would be a significant departure from the open enrollment, "all-comers" philosophy of the world's largest system of higher education. The system serves about 2.6 million students at 112 campuses statewide.

But officials said severe cuts to state funding over the last few years have forced the system to reduce its course offerings and turn "hundreds of thousands of students" away.

"We cannot provide the funding to be all things to all comers that we used to do," said Paul Feist, a spokesman for the California Community Colleges' Chancellor's Office.

"One focus here is to make sure that students who are taking classes for enrichment purposes — you know, maybe an older adult coming back to take community college — isn't crowding out a student who is coming to one of our colleges for the first time and is focused on getting a certificate, degree or transferring to a four-year institution, just because resources are so scarce these days."

Since 2009-10, the system has been hit by about $770 million in reductions, nearly 13 percent of its $6 billion budget. And if Gov. Jerry Brown's initiative to raise taxes is not approved by voters in November, the system will be hit with another $338 million mid-year cut.

Because of these cuts, campuses across the state have had to pare down their course offerings and increase class sizes; meanwhile it has become more difficult to get a class. During the 2008-9 academic year, the system served 2.89 million students, but it has since lost about 286,000 students, university officials said. Last year 137,000 students couldn't even get into one course, officials said.

That is one reason for this change, Feist said. The proposed enrollment policy would prioritize new students who go through college orientation and begin to develop an education plan as well as continuing students in good standing (or not on academic probation), Feist said. After 100 units, far above what is needed for an associate degree, students who lose their enrollment priority, Feist said.

The system would allow students to exceed the 100-unit cap and maintain enrollment priority if they are in  "high-unit" majors or are returning to school to pursue a new career. Feist said the change is about allowing first timers and continuing students the chance to reach their educational goals.

"The biggest impact is going to be for people who are maybe used to taking a class at the community college for lifelong learning purposes, enrichment purposes," Feist said. "They're going to be second in line, if you will."

The system will also institute an appeals process for those who are denied enrollment priority, Feist said.

The proposal is one of the 22 reforms recommended by the Student Success Task Force, which produced a plan to streamline the path to student graduation, certification and transfers within the system. That plan was approved by the Board of Governors in January.

The proposal will be presented again for a final vote by the Board of Governors in September, Feist said. If approved, the new policy goes into effect in fall 2014.